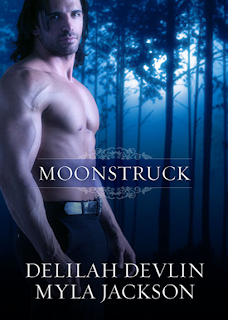 If everything goes as planned, it might be up on Kindle by Monday or Tuesday! So, here’s the deal. We’re going to put it on Kindle for a week at $.99. Just one week, before it goes up to a price that’s more in line with what everyone else charges for this length of story.   Its also on Smashwords.  What we would ask in return is that anyone who purchases MOONSTRUCK do a little something in return for us. Like tag it. Review it. Post the cover and blurb on your blog if you have one. You already know the cover is to die for. Come on, it Jimmy Thomas.  The stories will be very satisfying as well.  It can be read as stand-alone, but if you’re into the MIKs, you’ll really dig Moses.