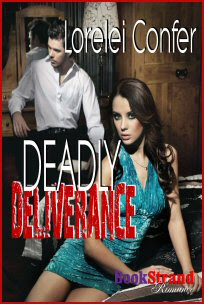 The author is giving away a copy of Deadly Deliverance to one lucky commenter.  Leave a comment and your email for a chance to win.  The contest will end on Monday, February 13, 2012.  Good luck.

Things get personal for Sam Brower, undercover task force detective for human trafficking, when his niece, Autumn, goes missing. To make matters worse, he’s forced to work with his ex-girlfriend, Lisa Conover, former DC cop, when she’s assigned to a cold case involving his long lost brother.
After infiltrating the gang responsible for the multiple abductions, Sam and Lisa try to unravel the stories behind the kidnapping of Autumn and the disappearance of Luke before their cover is blown.
Undercover work doesn’t lend well to trust. Even if they work together like a fine tuned instrument, will Lisa and Sam be able to salvage love after all they’ve been through?

“Ahh!! Oh!! Yes! Yes! It feels so good! Right there! Please, don’t stop, please,” Lisa Conover muttered. “Harder, harder! No! Don’t leave now!” She groaned as she pounded her fists into the hardwood floor. “Damn it! Why did you stop?” she asked Godiva, her twenty-two-pound silver tabby cat, who had jumped off her back and now sauntered over to a sunny spot on the carpet, flopping down in a very unladylike manner. Just like Sam used to do years ago, gets me feeling comfortable and then he takes off.

Lisa’s aching back muscles were so tight from hunching over her computer ten to twelve hours a day every day for the past weeks. She needed a massage. Better yet, she needed a vacation.

She rolled over onto her back and stared above at the open-beamed ceiling of her log cabin in the mountains outside Hickoryville. She studied the accumulation of dust bunnies along the beams.

The setting sun cast shadows across the room as she gazed out the two-story floor-to-ceiling windows on one wall. The view of the tranquil scenic mountains in its resplendent fall glory replaced some of the angst she felt about her work. She relaxed and stretched her arms above her head. Her stomach growled, reminding her she hadn’t had any lunch today.

She stood, trying to stretch her still-aching muscles by turning side to side at the waist, touching her toes—or attempting to, anyway.
Then maybe she could get a few more hours of work done before bedtime.

After putting down fresh water and food for Godiva she opened the fridge, hoping to find something for dinner. She knew what she would find but she looked anyway. It was empty except for a couple of eggs, and an older-than-she-knew container of yogurt she couldn’t trust anymore.

She glimpsed down at Godiva, who had already finished her dinner. “I think I’ll run down to The Barn and get something to eat. You can hold down the fort here for a while, right?” she asked Godiva, who sauntered away licking her lips.

She walked the short distance from the kitchen to the corner of the large open room to her desk, which held her state-of-the-art computer system with three screens and a laptop. She sat down to start turning everything off when the phone on her desk rang.

“Sorry, but I haven’t heard from Sam in years. How did you get my number?”

“This is the last number I had for him. I really need to talk to him ASAP.”

“Maybe I can help you. What’s the problem?”

“I’m sorry I can’t help you. Give me your name and a number where he can reach you, and if I hear from him I’ll let him know you’re trying to get in touch with him, okay?”

“My name’s Luke and he can reach me at…” Then the phone line went dead. He had hung up.
What is it about men? They never say good-bye.

I live on a peninsula in the mid west coast of with my husband, 2 cats, and AJ, my long haired .

I wrote my first story in the fourth grade in the form of a play which actually was produced by my teacher for parents and students. I continued writing and majored in English in College. I practice everyday to improve my craft.

I love reading almost as much as writing and have filled my book shelves with my favorites, i.e. Harlan Colban, Eliza March, Johanna Lindsey, Kathy Carmichael, Terri Garey, Karen Rose, LuAnn Rice, and Bobbi Smith just to mention a few, as well as all the classics.

From the very first sentence of the book I was hooked.  This is what romantic suspense is all about.  Its not too techie, alpha male dominated and the heroine is very strong.  The villain isn’t revealed until the very end and the subject matter is current and very relevant.  We pick up the story with Lisa answering her phone thinking its an existing client but what she gets is her world completely turned upside down.

Lisa Conover is the kind of heroine that I like.  She has flaws, a past that she doesn’t really want to talk about, independent, strong and a hint of sexiness.  She lives a comfortable life and is for the most part happy.  When she bumps into her ex-boyfriend, she’s not sure what to think except that she can not go through the pain of getting wrapped up in him and then have him leave again.  What sets Lisa apart from most romantic suspense heroine’s is that she is smart.  She’s an ex-cop and understands the world around her.  She isn’t afraid for herself and stands on her own two feet.  She’s not a smart ass and doesn’t beat around the bush when she is talking to the men that she is working for or with on the case.  She’s not so much tough but she’s the type of woman that you could have a girl’s night out with and she would have your back at the time.

Sam, oh Sam.  I loved him from the beginning.  Sam is the anti-alpha male.  He’s strong, sexy, smart for sure but he also realizes that women aren’t dumb and shouldn’t be treated like a piece of furniture.  He treats Lisa as an equal in every sense of the word.  They are partners in and out of the bedroom.  When he and Lisa broke up, he decided that they only way to live was to go deep undercover for months at a time.  Its what kept him going through those years.  Being with Lisa again and working with her makes him rethink what kind of live her really wants.

The plot in the book is a common thread through out the series.  I have not read the first two books in the series but I plan on it very, very soon.  Ms. Confer weaves a great deal of detail about human trafficking and the inner workings of gangs but doesn’t beat you over the head with it.  Her touch is spot on and she doesn’t make your head spin with unwanted filler about how the inner workings of the FBI database works.  Trust me, I’ve read books like that and I got bored.  (If I want to read that, I’ll re-read a Tom Clancey book and I’ve read all of his books at least twice)  She weaves the plot with the romance perfectly.  The plot and the romance between Sam and Lisa are intertwined together and it made me root for them that much more.

While the book is on the more sensual side, don’t expect graphic details in the bedroom.  Ms. Confer uses the time that Lisa and Sam have with one another well and lets the emotions and feelings of her characters play out.  Sometimes, I got frustrated with them but that just made their romance that much better.

I highly recommend Deadly Deliverance for any romantic suspense fan.  You can put away your dictionary of over used romantic suspense jargon to read it.  Ms. Confer knows that she has intelligent readers and it shows in her writing.  She respects the reader and now this reader is hooked.