Skip to content
Today is the cover release for 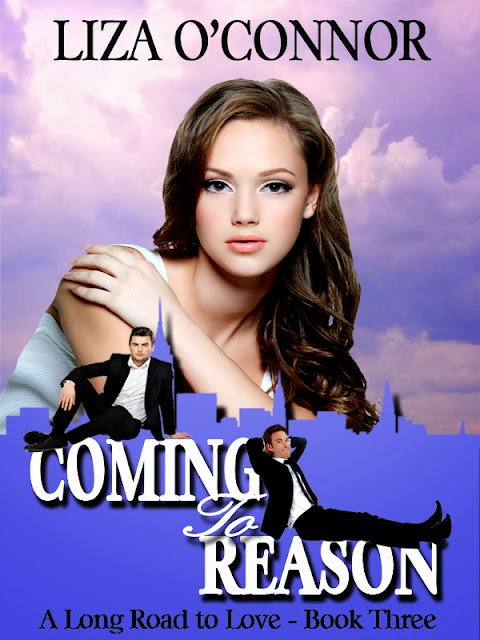 Carrie has committed to an inter-species marriage with Trent, her billionaire boss. Only, she requested a long engagement to improve his stats. Presently, he is eighty percent dreamboat and twenty percent nightmare. When he fires her so they can be a ‘normal couple,’ everything heads south. Providing her a stark contrast, her new boss is everything a woman could want in a man. But for Carrie, her heart is taken and thus, her path to reason remains long and arduous.
****
Liza O’Conner writes books that speak to my soul. Carrie is a character you will not soon forget.
–Rebecca Royce, author of The Warrior series.
I only have one thing to say about Liza O’Connor’s A Long Road to Love series: Read them. They’re funny. You won’t regret it!
—Maria Hammarblad, author of Kidnapped.
****
Excerpt 1
Carrie Hanson woke to the loving caresses of her boss and boyfriend, Trent Lancaster. She smiled as he rolled on top of her and dwarfed her petite four-foot-six body. God, she loved the man he’d become.

He possessed many admirable traits now: strong, thoughtful, a wonderful sense of humor, caring, and smart. Unfortunately, he had a couple of qualities she outright wished he didn’t. Due to his terrible upbringing, Trent would erupt into temperamental outbursts over the stupidest problems. Worse yet, he was a billionaire; a six-foot-tall, blue-eyed, dark-haired, handsome bachelor of society. Wolves could have done a better job raising him than his horrid, but thankfully dead, parents.

His eyes sparkled with love as he tugged off her teddy and perused her body. She breathed in at the warmth of his hand. His touch always set her skin on fire.

“I think we’re going to be late to work today.”
With a soft chuckle, she corrected him, “It’s Sunday.”

His eyes rounded for a moment. “I love Sundays.” He captured her hands and moved them to the ornate metal of the headboard, curling her fingers around the bars.

“I love you,” he added and kissed her with hungry passion, while his hands covered her breasts.

A haze of nirvana enveloped her for a blissful moment, then a jarring ring pulled her from heaven. Releasing the headboard, she slapped the black radio alarm by her bedside, determined to quiet it before it ruined the mood. Unfortunately, the ringing continued.

“No!” she yelped when Trent rolled to the side and climbed off the bed. He reached for his pants on the floor and extracted his phone.

Whoever called had him scurrying to the bathroom so he could talk in private. Carrie hoped a friend didn’t need money. His moments of generosity never worked out well.

She glared at the closed door. Who calls at six in the morning on a Sunday? She sat up, grabbed her teddy, and put it on. They had been so close to having morning sex, something she greatly liked since it put her in a good mood the entire day. However, she’d just discovered interrupted, no morning sex, made her disgruntled and grumpy.

She pushed out of bed and followed him to the bathroom, only he’d locked her out. His action surprised her. He rarely even bothered closing the door, never mind locking it.

Curious, she pressed her ear against the balsa wood. His low, refined voice came through loud and clear.
“Got to go. I’ll see you soon.”

A second later, he opened the door and pulled her into his arms. “Missed me?” He captured her mouth with his.

She pushed away from his kiss, knowing if he planned to see someone soon, he’d booted morning sex to the curb. “Don’t heat me up if you don’t plan to finish what you start.”

Liza lives in Denville, NJ with her dog Jess. They hike in fabulous woods every day, rain or shine, sleet or snow. Having an adventurous nature, she learned to fly small Cessnas in NJ, hang-glide in New Zealand, kayak in Pennsylvania, ski in New York, scuba dive with great white sharks in Australia, dig up dinosaur bones in Montana, sky dive in Indiana, and raft a class four river in Tasmania. She’s an avid gardener, amateur photographer, and dabbler in watercolors and graphic arts. Yet through her entire life, her first love has and always will be writing novels. She loves to create interesting characters, set them loose, and scribe what happens.
FOR MORE INFORMATION ABOUT
LIZA O’CONNOR & UPCOMING BOOKS:
Liza’s Blog and Website   Facebook   Twitter
Be sure to leave your email and tell me you want an ebook in order to enter the prize at each blog contest site.
a Rafflecopter giveaway

13 thoughts on “Cover Reveal for Coming to Reason (A Long Road to Love, Book 3) by Liza O’Connor”