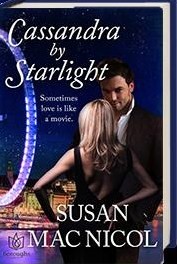 Sue Mac Nicol was born in Headingley, Leeds, in the United Kingdom. When she was eight years old her family emigrated to Johannesburg, South Africa. One day, after yet another horrific story of violence to friends, they decided it was time to leave. In December 2000 they found themselves in the Arrivals area at Heathrow and have stayed in the UK ever since, loving every minute of it.
In between her day job as a regulatory compliance officer for a financial services company in Cambridge and normal daily life, the inspiration for the Starlight series was born; Sue’s characters, Cassie and Bennett, finally made their debut onto the flickering screen of a laptop and gave her the opportunity to become a published author—a dream she’s had since being a young girl old enough to hold a pencil.
Sue is a member of the Romance Writers of America and the Romantic Novelists Association in the UK. She lives in a town house in the rural village of Bocking, Essex, with her husband of twenty eight years, Gary (who believes he deserves a long service award for putting up with her for so long), two children, Jason, 24, and Ashley, 19, and a mixed collie mongrel called Blu.
BUY NOW LINK:
·         All Romance
·         Amazon
·         Smashwords
ONLINE LINKS:
Susan Mac Nicol Online:
Website  http://www.boroughspublishinggroup.com
Blog  http://www.boroughspublishinggroup.com/blog
Facebook  http://www.facebook.com/boroughspublishing
Twitter  http://www.twitter.com/BoroughsPubGrp