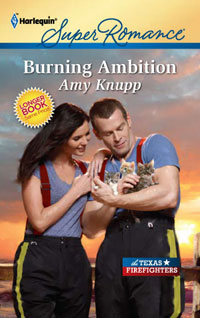 Captain Joe Mendoza has wanted to be fire chief since he was four years old. And now he’s one step away from making assistant chief. But that’s proving to be one big step now that the chief’s daughter has joined his crew. He’s promised he’ll keep her safe — and promised himself to keep things strictly business.

Faith Peligni has battled her way back from an on-the-job injury in San Antonio, and she’s stronger than ever. Even if as the first female firefighter on the San Amaro Island crew — and the chief’s daughter — she’s expecting some heat. But with the impossibly distracting Joe Mendoza as her captain, who knew it could get this hot?

I stumbled on to this series a while back and I have not been disappointed.  Burning Ambition is the fourth in the series but all  of the books are stand alone.  The series revolves around a firefighter station on an island on the Texas Gulf Coast.  It features the trials and tribulations of the firefighters and their every day lives.

Captain Joe Mendoza is a 40 year old firefighter that has focused solely on his job and not much else.  He looks up to his mentor, Chief Peligni and his work ethics.  He has know Faith since she was a teenager and when she decided to join the station, he promised her dad, the Chief, that he would keep her safe.  What he didn’t count on was falling for her.

Faith Peligni was a firefighter with the city of San Antonio until she got hurt.  She moved back to the island and joined the station there.  What she didn’t except was her attraction to the captain and having to fight her fears while going into a fire.  She has a lot to prove being the only female firefighter on the island.

Burning Ambition is an emotional, sexy read that will make you want to move to the island to see all of the firefighters.  Joe and Faith have to decide what is important in their lives and how it can work between them.  The attraction is instant and hot but the real problem is what do they both want out of life?  Is there room for both?  And is your life ambition worth having if you don’t have someone to share it with?

Ms. Knupp does not disappoint in the 4th book of the series.  I found Burning Ambition to be the most emotional of the series and most action packed.  I can’t wait for more of the San Amaro Island firefighters.