Sometimes out of the frying pan and into the fire is the best way to burn.

Amy Stark has it all together—except for chronic bad taste in men. She’s firmly in hands-off-all-men mode when a flat tire forces her to accept the help of exactly the type of man she’s sworn off. Arrogant, cocky and condescending.

When she runs into him again later that day and then finds out her brother has invited him for dinner, the fire between them has a sizzle of a different kind.

At eighteen, Buck Montgomery left home to make his mark on the bull-riding circuit. He may have had wild success in rodeo but his personal life is in the dust, and while he’s ready to start a new life he’s wary to expose his heart. Buck knows he should tell Amy the truth, but every time he opens his mouth, hers is right there with kisses like molten lava.

When his past resurfaces at the worst possible time, Buck can only wonder if Amy will love the man he has become…or if the man he was will chase her away.

Product Warnings: Contains barnyard language and clap-your-hands-over-your-mama’s-eyes sex between a cowboy with a checkered past and a ranch girl with all the right moves

I absolutely love, love, love telling stories. I love taking characters and fleshing them out, giving them personality, flaws and all, conflicts and hopes and crafting their story. I never get tired of storytelling. And there is so much for me to draw from, not the least of which si my own life. Many decades ago there was a television program called The Naked City. It used to open with the line, “There are eight million stories in The Naked City.” That’s how many I have running around n my head.

And thank you so much for the compliment, by the way! I try to keep my stories fresh by making each character different and unique and devising new plot twists. And I try to write each story for myself, as one I would read and absolutely love. There are authors I no longer follow because their plots and characters are so repetitive. I really try hard not to let that happen to me. And I meet so many people whose personalities and habits I can draw on, whose lives give me ideas, that so far it’s working.

Excerpt
Amy ran her finger around the rim of her mug. “I understand you met our new neighbor. Buck Montgomery.” She made her voice as casual as possible.

Matt looked at her with curiosity. “Yeah, I did. How did you know?”

Her brother leaned forward on his elbows. “He is nice. He bought the Hayes Ranch and plans to increase the stock and bring it back up to the level it once was.”

“He must have a lot of money,” Reenie commented. “As we all know, ranching’s not cheap.”

Matt shifted his gaze from his wife to his sister and back again, his face nearly expressionless. “I believe he had a nest egg he cashed in. He’ll be running pretty close to the bone for a while, but I have a feeling he’ll make a success out of that place.”

“What do you know about him?” Amy asked. “Where did he come from?”

Matt laughed. “Amy, if you’re so interested, why don’t you ask him yourself?”

“Yes,” Reenie chimed in. “In fact, let’s invite him over for dinner.”

Amy drained the last of her coffee. “Are you sure that’s such a good idea? I mean, he seemed nice enough, but what do you really know about him?”

Matt snorted. “Damn, Amy, how much do I need to know to be a good neighbor? I’ve spent a little time with him twice, and I’m pretty sure he’s not an ax murderer on the loose.”

“He’s a neighbor,” Matt stressed. “Since when did you become so antisocial?”

Since I had an unwanted physical reaction to the man. And dreams that I can’t seem to control.

“Fine.” She pushed back her chair. “Fine, fine, fine. Call him and invite him over. You can do your famous barbecue steaks.” She rinsed out her mug and put it in the dishwasher. “I have some errands to do in town. I promised Hank I’d ride fences with him this afternoon.”

Hank was the oldest of their hands, the one who’d been here the longest. He’d been the one to put Amy on her first horse and to show her “which end of the cattle eats and which end craps,” as he’d so colorfully put it.

“You know you don’t have to do that,” Matt pointed out. “You’ve got records to bring up to date and the monthly weight-gain reports to get out. And Hank just wants an audience for those tales he’s told a thousand times.”

When their parents had decided to move New Mexico, she and Matt had split up the responsibilities of the ranch. She took care of all the paperwork, which he hated, and he served as the actual foreman, supervising the hands and overseeing the daily care and feeding of the cattle as well as maintaining the fences and outbuildings. But when she was younger she had often ridden fences with Hank, listening to his. She figured by now she was the only one left who’d put up with them.

“I’m good,” she told him. “And sometimes it just clears my head to ride along with Hank.” She picked her keys up from the counter. “See y’all later.”

All the way into town, she couldn’t seem to get Buck Montgomery out of her head. She’d hardly spent much time with him, and half of that she’d been royally pissed. But the image of the man just lingered in her brain, not to mention what thoughts of him did to her body.

She reached the center of town almost before she realized it, and considered herself lucky to find a parking place on Main Street. The entire time she did her shopping, Buck Montgomery occupied her thoughts. She was so distracted by the time she stopped at the office-supply store, she picked out some items she’d purchased the week before. The salesman jokingly asked her if she wasn’t a little young for her memory to be fading. Finally, she decided to stop and get something to eat. Maybe a full stomach would make her brain behave better. But as she went to open the door of Bit and Bite, a hand reached out ahead of her.

There it was, that deep, rich voice that haunted her dreams and sent shivers skating along her spine. And made the pulse deep inside her body throb hard and fast.

Desiree is giving away an Ebook of choice from her backlist for each blog stop plus she has two grand prizes. (1) 6 ebooks (winner’s choice) from backlist and a Phoenix Agency Mug and (2) Buck Naked mouse pad and a Wild West messenger bag. Grand prizes will be drawn via rafflecopter (code below) and individual blog prizes will be drawn from commenters. Make sure you leave an email addy for the individual prizes and good luck! 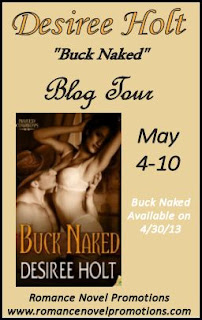