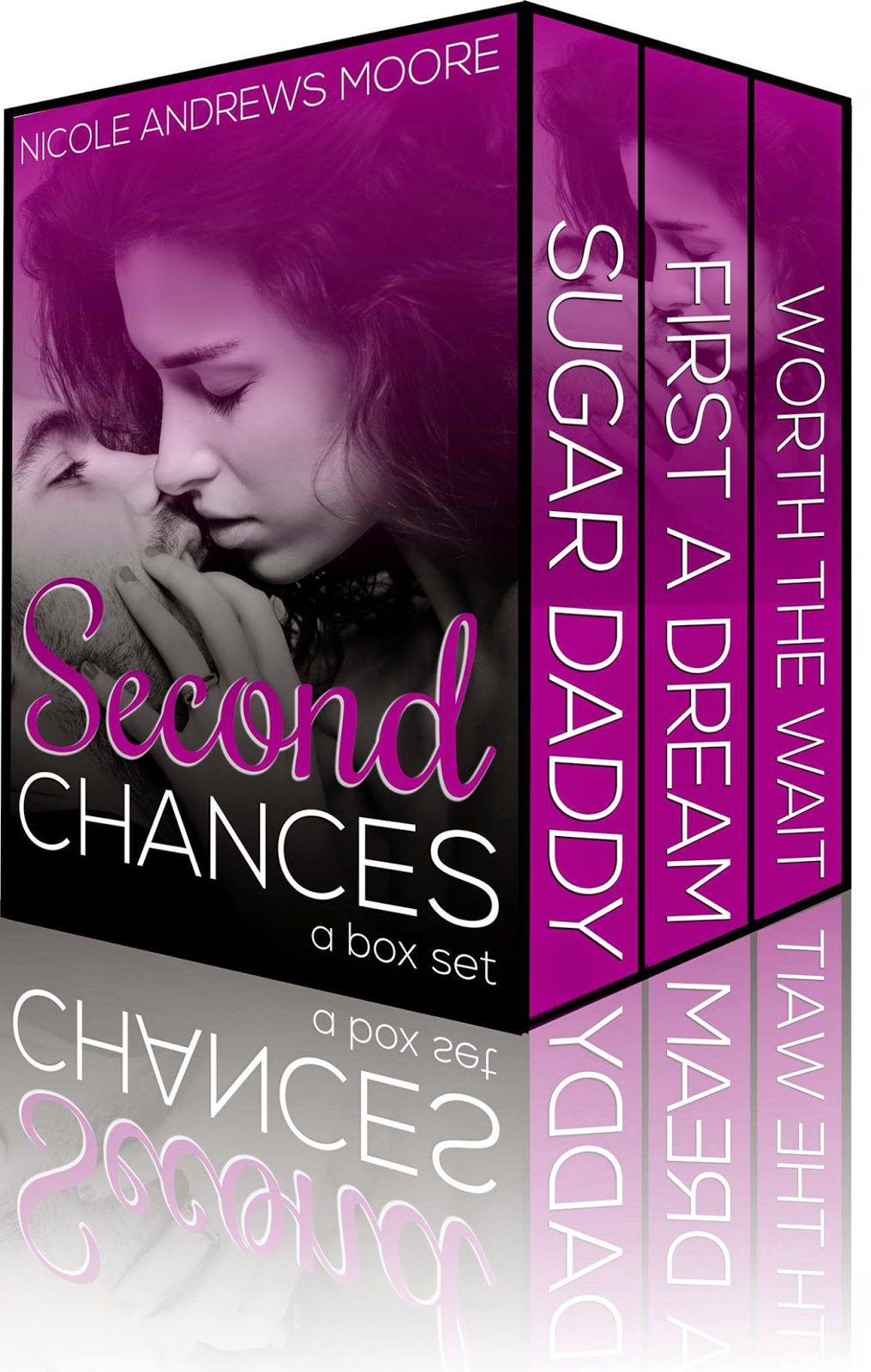 This boxed set contains three full length novels featuring women who have a second chance at love, proving love really is sweeter the second time around. 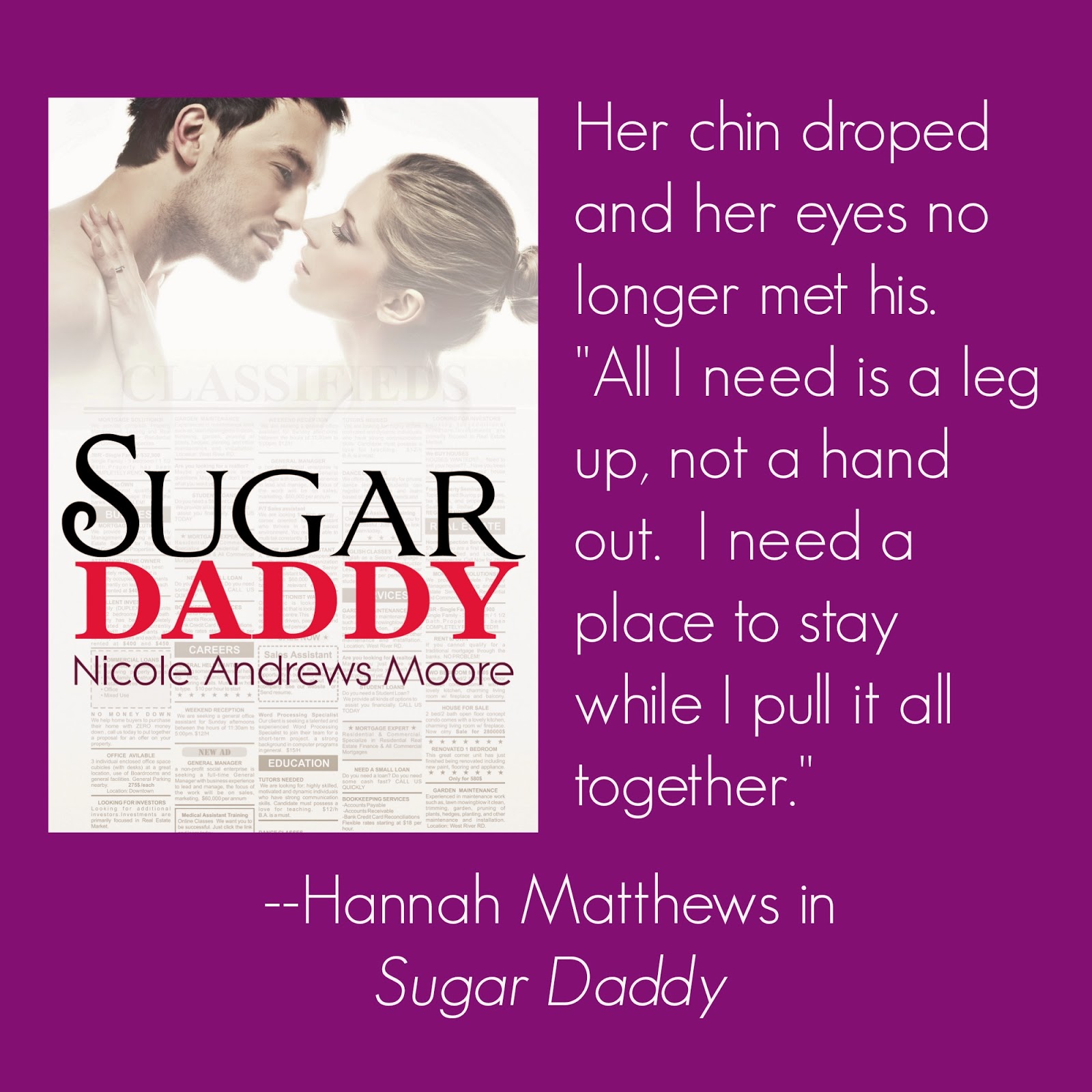 Sugar Daddy Review
“Absolutely one of the best books for me right now. I loved it mostly because it was fluffy, romantic, and meaningful.” Reading Renee Reviews
Sugar Daddy Synopsis
Hannah Matthews, an over educated under employed mother of twin girls, takes the girls on the annual Labor Day weekend family vacation while her husband stays behind. By the time she has returned, he has cleaned out their bank accounts, their apartment, and moved in with a surgically enhanced stripper. Try as she might, Hannah is forced to resort to desperate measures: finding a Sugar Daddy.
Gavin Meyers, affluent businessman, discovered too late that his bohemian wife wasn’t in love with him when he caught her in their bed with a lover…his sister. After a heated meeting with the lawyers trying to arrange the divorce agreement, his lawyer suggests he get a hobby and work out all his anger. He can’t think of a single thing he wants to do more than find some woman to punish for his suffering. And it just so happens, he stumbles across a personal ad that will serve his purpose. What kind of woman advertises for a Sugar Daddy? 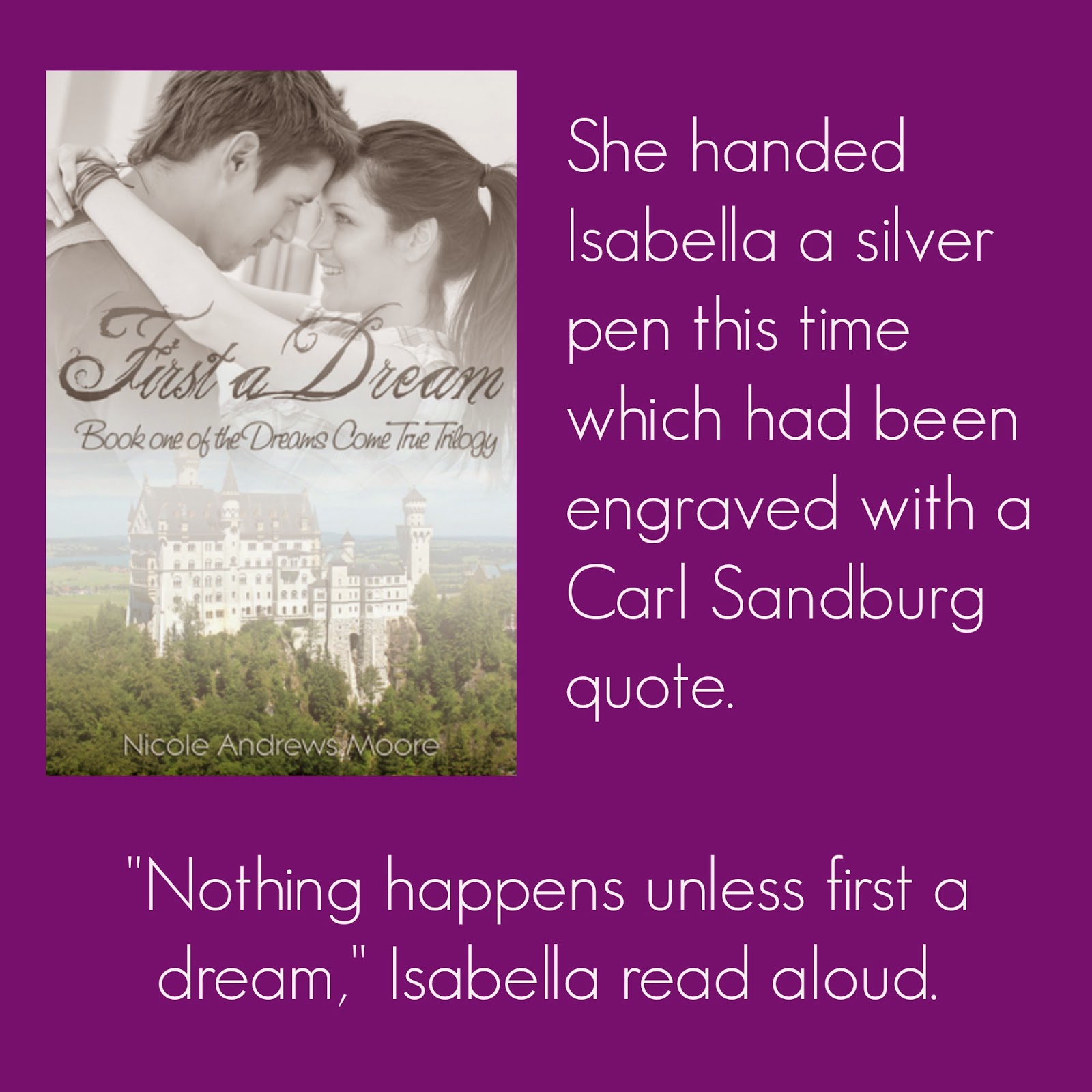 First a Dream Review
“This is a Modern Day Cinderella Story. Not my typical read, but I truly enjoyed it. At first I wasn’t sure I would like this type of story, but once I started reading I found I couldn’t put it down. The characters were so easily liked. Gabriel a very rich playboy, and Isabella a Mother of Two found a love that some would say could only be found in a fairy-tale.
“Don’t ever stop dreaming. Just dream bigger now.” Romance Uninhibited
First a Dream Synopsis
One showy winter night when her best friend has to cancel their girl’s night out, Isabella surprises her husband at work, but she was the one who was shocked to find him in a compromising position with her sister. As a budding photographer, she struggles to find her passion and hold everything together for her young son and daughter, while preparing for a major gallery show. Desperate for inspiration, she seeks out the advice of her professor and mentor who tells her to dream again and be happy. Unsure of what that would entail, but distracted still the same, Isabella literally runs into Gabriel Charmant, a handsome rich playboy only in town for the summer. He imagines Isabella will be fun, a distraction to stave off the boredom as he takes summer classes in this provincial town forty-five minutes from the bright lights and city life he’s used to in Montreal.
Gabriel never imagined that without even trying, Isabella would change him and without even knowing, she’d win his heart. Just as they begin to build a future and everything seems to be coming together, his lies and deception threaten their happily ever after. 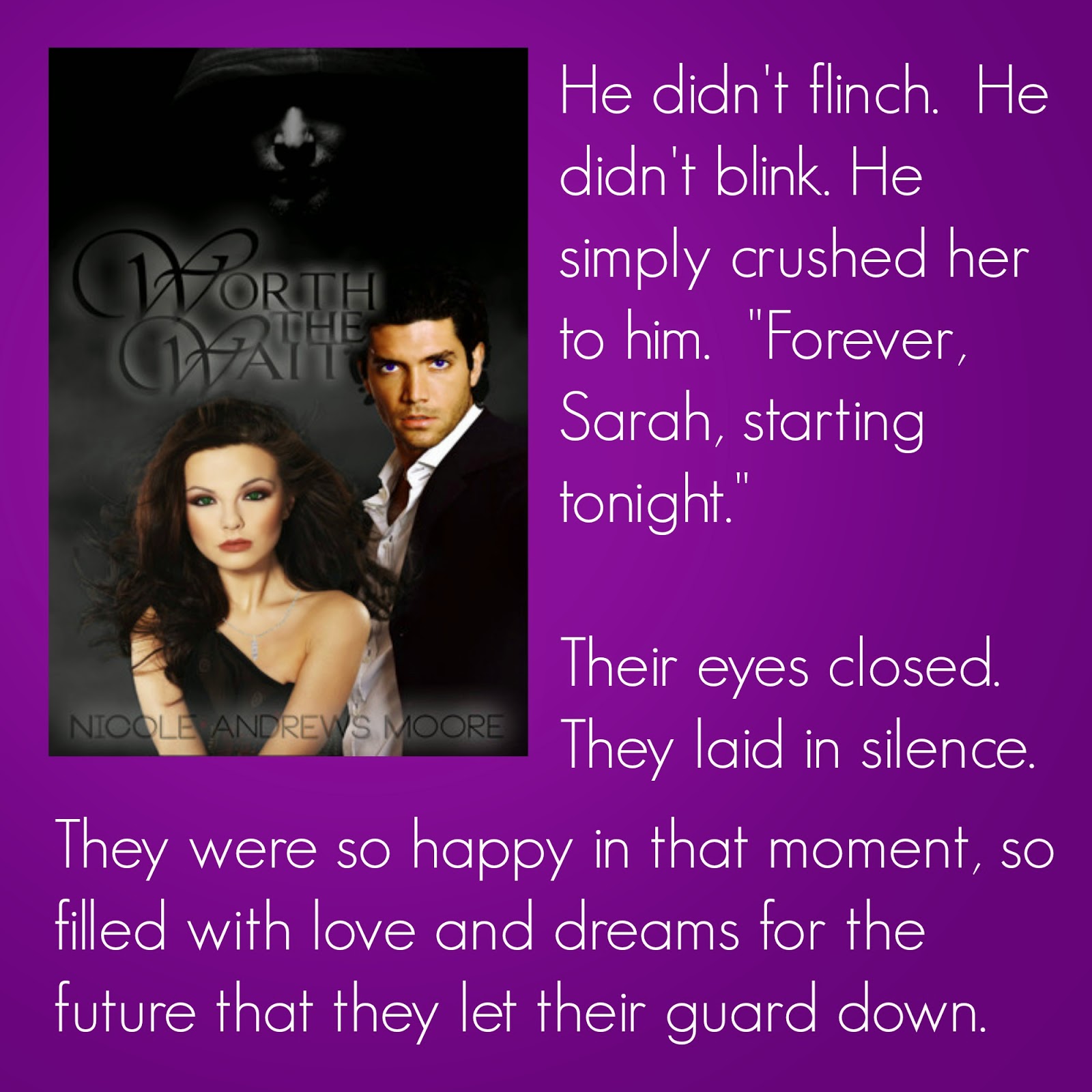 Worth the Wait Synopsis
When Sarah discovered lingerie in her husband’s vehicle, she knew her life would be changed forever, but she never could have predicted how much. Soon, what began as a harmless Girl’s Night Out with a friend for a tarot card reading turned into a shocking realization that her mother had kept a huge part of her heritage from her, and her dreams of late suggested that her good friend, Brian, wanted to be more than just a good friend.
For as long as he had known Sarah, Brian had felt an undeniable attraction to her. The longer he knew her, the more he wanted from their friendship. He would do anything to heal her heart and help her become who she was meant to be. He would do everything within his power to protect her from harm and save her from the forces that threatened to keep them apart because he knew some loves were so special that they were worth the wait. 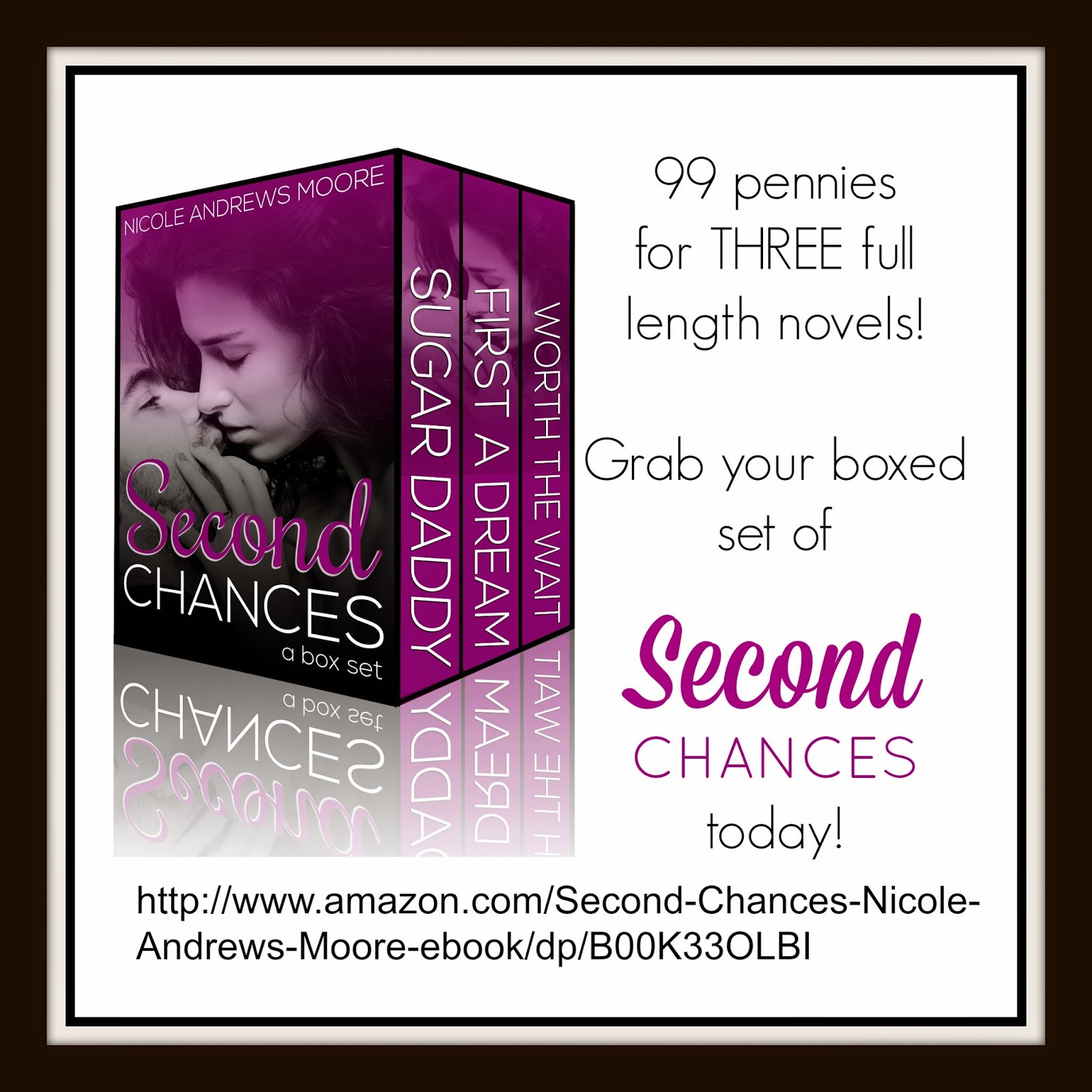 Facebook * Twitter * Goodreads
Nicki recently moved from Charlotte, North Carolina to Myrtle Beach, South Carolina as she works on making the most of her own second chance.  Her new life has barely begun and she has loves every minute of it. Every day of her life seems to bring new adventures, some bigger, better, shinier and prettier than others. She’s still getting used to that new life smell she’s experiencing, a combination of hope, love, and happiness. (The perfect scents to build a new life on…)For fun, she spends time with those she cares about, cooks, reads, writes, and especially lives to travel. The current travel goal: visit every Margaritaville. Three down! (Eleven to go?)