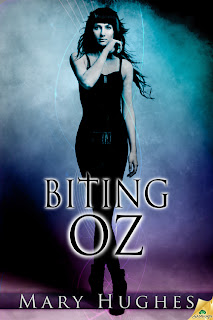 Mary will be giving away one of her backlist, winner’s choice, at each tour stop. There will be a Tour Grand Prize of all 5 of her BITING LOVE series, winner will be selected from all of the commenters from all stops.  Don’t forget to leave a comment and email for the daily prize.  No email…no prize.  Good luck!

But someone is threatening the show’s young star. To save the production, Junior must join forces with the star’s dark, secretive bodyguard, whose sapphire eyes and lyrical Welsh accent thrill her. And whose hard, muscular body sets fire to her passions.

Fierce as a warrior, enigmatic as a druid, Glynn Rhys-Jenkins has searched eight hundred years for a home. Junior’s get-out-of-Dodge attitude burns him, but everything else about her inflames him, from her petite body and sharp mind to what she can do with her hip-length braid.

Then a sensuous, insidious evil threatens not only the show, but the very foundations of Meiers Corners. To fight it, Junior and Glynn must face the truth about themselves—and the true meaning of love and home.

Guest Post:
Thanks so much, Harlie, for having me here today!
Why a druid?
Myths and mysticism fascinate me. As a child I saw magical possibilities in everything around me. Finding the magic in nature, in life, is as wonderful and natural to me as breathing. Between that and my Celtic ancestry, it was perhaps inevitable that I found myself interested in druids.
A decade or more ago I came across a book, Life and Death of a Druid Prince. It’s an enthralling tale about the discovery of a bog body that bears all the markings of a druid prince who sacrificed himself to save his world. I decided to do a contemporary romance about a druid book and the mysterious professor who’s tied to it. I didn’t finish the story (it’s currently at 27K and I may finish it some day) but I researched druids then, and their courage and daring in the face of the seemingly inexorable Roman conquest remained strong in my mind.
I’ve also been looking to create a hero from for some time now. The characters I write are all seeded in my reality—that is, every character has a bit of my “real” life inside them that’s the grit to the character’s pearl. In Glynn’s case, it’s my husband, whose rebellious streak I never understood—until I discovered one of said husband’s ancestors was a rebel in the Welsh equivalent of the Boston Tea Party. It’s not willfulness, it’s a strong will to see that right is done (and my husband comes by it naturally 🙂 Glynn has this strong sense of what’s right, and the will to fight for it when it’s threatened.
Born in the 1200s, Glynn isn’t a druid. But he is a vampire who encapsulates the spirit of the druid prince: the enigmatic warrior-priest, a thoughtful man who is capable of swift action, and who does what he has to in order to save his world.
Tour Schedule
8/14 – Readheads Review It Better
8/15 – Ravishing Romances
8/16 – Brunette Librarian
8/17 – Harlie’s Books
8/20 – Black Raven’s Erotic Cafe
8/21 – Guilty Pleasures Book Reviews
8/22 – My Odd Little World