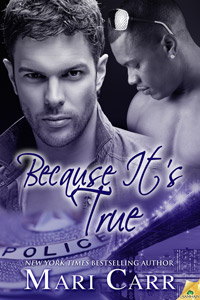 Let’s give Mari Carr some love.  Its her first foray in M/M romance and she’s nervous.  If you leave a comment with the title of your favorite Mari Carr book, one person will win a $10 GC to either Amazon, B&N, Samhain or EC.  Winner’s choice!
Sometimes there are only two choices. Love…or leave.
Jacob James falls for Rodney the moment the New York City cop crash lands into his far-too-predictable ranch life. The sexy city slicker is everything a lonely Wyoming cowboy could ever dream of. When Rodney is shot in the line of duty, however, their off-the-charts attraction turns unexpectedly cool. Jacob offers the only thing he has left—friendship.
All Rodney can think about—besides his cowboy lover—is getting back to his job. But what good is a cop who can’t fire a gun? While he’s grateful for Jacob’s support through months of grueling physical therapy, how can he offer anything more when his own future is so uncertain?
When he’s finally cleared to return to work in New York, Rodney thought it would be the happiest day of his life. Except reaching his goal means leaving Jacob behind…and a future he never thought he wanted. Until now…
Warning: New York City cop meets Wyoming cowboy. Come on. You know that’s going to be hot.
Excerpt
Prologue
Searing pain roared through Rodney’s arm as black spots danced before his eyes. More gunfire pounded into the wall of the building behind him, pelting him with shards of shattered brick. He’d known something was wrong the second he walked out of the bank. Hell, he’d had a premonition all morning that something would happen, that everything was about to change. He knew better than to ignore his gut feelings.
“Rodney!”
Fuck. Bridget was out in the open. He forced himself to remain conscious despite the agonizing fire currently raging through his body. He watched Mark throw himself on top of her, shielding her from the gunfire.
“Get her to the fucking car!” Rodney yelled. Jesus. If Bridget was killed, it would be his fault. His. It was his job to protect her.
Bridget crawled closer.
He reached out with his uninjured arm. “Bridget, take this. Get to New York.” He pressed the flash drive they’d spent the last month of their lives searching for into her hand. It was the key to putting the judge whose henchman was currently trying to kill them away forever.
“I’m not leaving you,” Bridget insisted.
Rodney took a deep breath, praying for the strength to get her out of harm’s way. Mercifully, Mark grabbed her, dragging her to the truck.
Please let her make it. He sighed with relief, the sound coming out as a harsh shudder when he watched the truck with Bridget ensconced inside pull away.
“Bridget,” he whispered.
Strong hands gripped him, shocking him. What the fuck? He started to kick out, but the last of his strength slowly drained away.
“It’s me, Rod.”
Christ. Jake. No.
“Get down,” Rodney said, the words sounding more like a bark than his normal voice. “Get inside!”
Jacob didn’t reply. Instead he lifted Rodney’s upper body with firm hands beneath his armpits and dragged him to the entrance of the bank. The movement was excruciating and bile rose to Rodney’s throat. Waves of nausea caused by the red hot poker lodged in his arm enveloped him.
He’d been shot. It was a possibility he’d faced every day as he patrolled the streets of New York City as a cop. Who would have thought this sleepy town of Saratoga, Wyoming would be the place to bring him down?
The gunshots had ceased with Bridget’s escape.
Jacob laid him gently on the floor of the bank’s lobby. He saw a security guard standing next to his friend, talking on the phone. He would have grinned if he hadn’t been in so much pain. If he was going to die, he couldn’t think of a better last sight than Jacob’s gorgeous face. Sirens sounded in the distance.
“Bridget,” Rodney whispered.
Jacob knelt next to him. “Matt and Mark got her away. She’ll be fine, Rod. And so will you. Just hang on, man.”
She was safe. Jake was safe.
Rodney let those comforting thoughts permeate the haze of pain, though he still couldn’t let go of the premonition.
Everything is changing.
His eyes drifted closed, his body shutting down.
They were safe.
But was he?
Buy Links
Samhain
Amazon
Barnes & Noble