IN THIS “GRIPPING” MYSTERY THRILLER SOMEONE TRIES TO BURN NICK BANCROFT ALIVE, BEATS HIM SENSELESS, USES HIM FOR TARGET PRACTICE AND WORST OF ALL HIS BELOVED CHICAGO CUBS DISAPPOINT HIM AGAIN! SOMETIMES A PI JUST CAN’T CATCH A BREAK! BUT WHEN HIS CLIENT IS A SEXY NUDIST, NICK BANCROFT WILL PUT UP WITH JUST ABOUT ANYTHING!

When a sexy nudist hires him to protect her from whoever is threatening her life, Nick Bancroft becomes the target. Someone tries to burn him alive, beats the hell out of him and, since that didn’t run him off, uses him for target practice. Meanwhile, two people are murdered, Nick’s true love, Maggie Atley, is more than somewhat perturbed by his relationship with his client, and a mysterious club seems to hold the answer. Nick survives an exciting but still losing season by his beloved Chicago Cubs, a vicious attack by a couple of huge dogs and eventually puts the finger on the bad guys.

I’m an ex-newspaper reporter who inherited a run-down, one-man detective agency. My name is Nick Bancroft. I used to do investigation work occasionally for a friend Jimmy Jackson, who left me the business and stuck me with an office on the top floor of an old building in the wrong end of town.

I would have refused the inheritance, but I was sick of working where news had been converted to entertainment. And, besides, Jimmy had paid six months’ rent in advance for the office with a small apartment attached. Since I inherited the business I have helped solve a murder and got some press as a result.

In a small town like Centrel City, you can find bribery, graft, kickbacks, political influence peddling, criminal cover-ups, and sometimes murder. Now when I get involved in a case, there usually is a story I can sell to the upstate Chicago Times. I didn’t expect to make a living as a private investigator and freelance reporter, but I was wrong … sort of. It beats making money for someone else and it leaves time for my almost favorite sport of bowling and my passion for the Chicago Cubs.

It’s all in a day’s work; I can be tough enough when I have to be. On the other hand, I can be soft for the ladies, especially for an on-again off-again lover, Maggie Atley. Nothing is ever as it seems and I don’t quit until I find the answers. My name is Nick Bancroft. 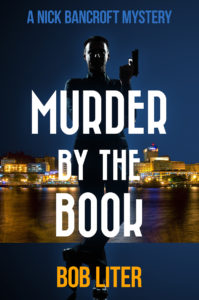 Murder by the Book, written by Bob Liter

Nick Bancroft inherits a rundown detective agency and embarks on a new career as a hard-boiled detective. When date rape drugs show up in Centrel City, so does reporter Nick Bancroft. The drugs are discovered at two different murders with sex etiquette books left at the scenes. Nick is hired by the first victim’s father, Ramsey Sinclair, to find the killer. A Chicago detective, Miss Faustine, is also hired by Mr. Sinclair to work “closely” with Bancroft. His focus is interrupted when he begins a love affair with receptionist, Maggie Atley, from a neighboring office.

Bancroft is banking on solving the murders and selling the story to the Chicago Times. As the case unfolds there is enough danger, drama, and deception to fill a book. Nick finds few things are as they seem and in his enthusiasm he becomes the target of a shooter and also the target of charming Maggie Atley’s affections. 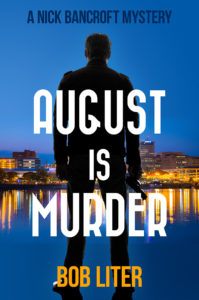 A sexy nudist hires Nick Bancroft to defend her from threats on her life; Nick volunteers to provide 24-hour protection. Now, he is the target and August becomes even hotter when someone tries to burn him alive. Nick is not one to turn tail and run, especially now with two murders and Lady Godiva to protect. Nick’s true love, second only to the Cubs and bowling, Maggie Atley, is more than somewhat perturbed by the arrangement with his beautiful client.

After weeks of investigation there are still unanswered questions. Who are the bad guys? What does a mysterious club have to do with the murders? Can Nick survive another losing season by his beloved Chicago Cubs? Is this the last inning for Nick and Maggie? 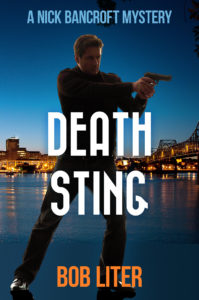 After an intimate breakfast together, while reading the paper to Maggie, Nick is baffled by a headline: Female Body Found Covered with Stings: The Sheriff Calls the Death an Accident. Free-lance reporter and private detective, Nick Bancroft, doesn’t believe it and is drawn to the case like a bee to honey. He learns the victim lived in a home for young unwed mothers who work as waitresses and hookers at a nightclub.

Murder suspects include an alcoholic handy man, the man and wife who operate the home, a nightclub operator and his henchman, and a sheriff’s deputy. Everyone is trying to stop Nick’s investigation, including federal agents.

Even when he and his earthy lover Maggie survive being dumped in a deep lake with weights tied to their ankles, Bancroft is unwavering in his pursuit of the truth. Will Maggie and Nick’s romance sink or swim before the case is solved? 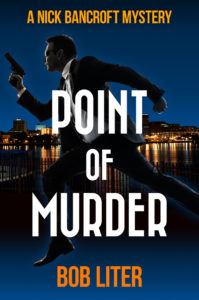 Nick Bancroft, a former investigative reporter, enjoys a mundane existence in Centrel City operating a one-man detective agency. He supplements his pauper’s wages selling news stories to the Chicago Times. In a small apartment, Nick and his roommate Maggie, share frivolous romantic lovemaking and the responsibility of feeding a stray cat that adopted them. On the surface it seems picture-perfect.

The bed of roses ends abruptly when Nick’s destitute young friend, Bobby Scalf, is found murdered with a blunt six inch spike in his head. Nick becomes a suspect when the second murder victim is discovered in the abandoned building where the boy lived.

While Nick tries to find out who killed the boy, he uncovers a web of corruption involving the town council, the school board, the police chief and the local newspaper publisher. Nick survives several attempts on his life, and that of his stormy lover, before nailing the killer and exposing the town’s secrets. Solving the town’s problems may not be enough to solve the problems festering between Maggie and Nick. Is it really over? 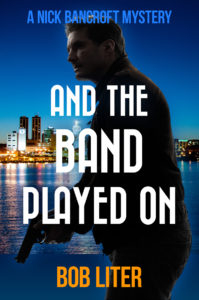 And the Band Played On, written by Bob Liter

Freelance reporter and sometime private detective, Nick Bancroft, is tough enough when he has to be. On the other hand, he can be soft for the ladies. That’s how he ends up at an outdoor band concert, with Maggie, a librarian, divorcee, and his very talented lover. Nick is front row center to witness the murder of a well-connected private secretary of an important political figure.

It doesn’t earn him any points with the cops that he is on the scene before them, and it doesn’t earn him any points with certain influential politicians that he won’t get off the case. Not only is Nick drawn into the dirty details of the crime, someone is trying to kill him. During the investigation, Maggie and Nick come face to face with the events surrounding 9-11. Will the final case break their spirits and crumble their love, or will they emerge stronger and committed to life together?

The first time they tried to kill me I was asleep. My office and apartment were on the third floor of a nearly abandoned building. My own coughing jarred me awake. I rolled to a sitting position from the sweat-wet bedding and continued choking on hot, acrid air. The sweat was no surprise. My air conditioner had quit. But this was more than August heat in Centrel City, Illinois.

A flip of the light switch near my bed did nothing to alleviate the darkness. I went to hands and knees and felt around until I found my pants and shoes, sat against the bed, squirmed into the jeans. Heat from the floor threatened to roast my rump.

“Don’t panic, Nick,” I said aloud. Should I try to save anything or just get the hell out? My files, I had to save my case files. I crawled into the office, stood, and pulled out the top drawer. I felt my way to the office door and opened it. A swish of even hotter air swept against my face.

What about Maggie? She might be in the office on the second floor. It was well past midnight. Why would she be there? I assured myself she was not. She was the reason why I now had a stray cat and a cracked heart. What about the cat? Any cat that came and went when the office door was locked wouldn’t be trapped in that old building.

Robert T “Bob” Liter (1923-2008) was born in Hartley, IA to Charles and Hazel Liter and grew up in Des Moines, IA.  His sisters June and JoAnn, joined the family before the decade was over. Bob was a U.S. Navy veteran, and was honorably discharged after two tours of duty, one tour in World War II and the other tour in the Korean War. A Graduate from Drake University in Des Moines, IA, he earned his degree in journalism, and married Lillian in 1950.

I came along 9 months later; my name is Martie. I was soon followed by my sister Jeannie and two brothers, Jeff and Ron.

Later in Dad’s journalism career he worked as a copy editor for the Peoria Journal Star, Peoria, IL until his retirement. Through the years he was also a writer. Early in his sideline career he was published in various True Confession magazines. When Dad retired to take care of Mom he continued to pursue his passion for writing. Much of his work has been available since 2002 in EBook format.

It is my honor to introduce new readers to the Bancroft Mysteries where the character Nick Bancroft has an uncanny resemblance to my Dad, Bob Liter with his wit and bodacious gutsy approach to life.  Then there is Nick’s on-again off-again lady, Maggie Atley, who is just like Mom, Lillian Liter, in the way she deals with a self-proclaimed “male chauvinist piggy.”

While Nick solves mysteries in the fictitious, but very real, community of Central City, IL he still finds time for his love-hate relationship with bowling, and his avid undying passion for the Chicago Cubs and Bears.

Author Page on Amazon: http://www.bit.ly/BobLiter (This sends a reader to where all the Buy Links Are)