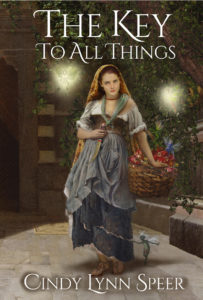 The Key to All Things

Every day, Lady Avriel hears the bards sing about the greatest love story of all times, a heartbreaking romance between a human nobleman, Captain Edward de Vere, and the beautiful Queen of the Fae, who shattered his heart when she abandoned him to accept her throne. Avriel secretly longs for the sad and romantic captain as she works as a double agent, serving at both human and fae courts to keep the peace between the two kingdoms.

But for three hours every night she remembers a completely different world, where the greatest love story is a lie, and Edward belongs to her. She believes this reality to be the true one, even if no one else does. The world has fallen under a spell, and it is up to Avriel to find its source and undo it.

To set things right, Avriel must face the all-powerful Elder Fae and confront the darkest powers that rule her destiny – only to learn that if she proceeds, her actions will bring chaos and open her kingdom to destruction. Is this a choice she is willing to make to bring her love back?

There is a story that sits in the back of my head, and I remind myself of it every time I lie down to sleep. It is the story that recounts everything I had, and everything I lost. It is not the story you know, about war and love. You believe in the tale of Catherine of the Willows, a part fae who fell in love with Edward de Vere, Captain of the King’s Guards. You al-ready are nodding, you know the story like you know your own face in the mirror. It’s been told to you thousands of times. Catherine and Edward fell in love. They married despite their love being forbidden. And then, when the story should have ended with everyone having their happily ever after, the unthinkable happened. Catherine was chosen to take the fae throne. And with that, came a terrible decision. She could keep her mundane life, her marriage, or she could sacrifice her identity and become the Sapphire Queen of the Fae.

She sacrificed. And as she rose, Edward fell. Tossed aside, he became the tragic hero.

Here is the truth, if you would have it. There were three men who were like brothers: an inventor, a pirate, a romantic; warriors all. And there was a woman, Avriel, neither all fae nor all human, and she lived between the worlds of the human and fae courts. Avriel was the one who enchanted Edward, Avriel was the one he wed, and everything should have been the happily ever after of the stories: flowers and sunshine and perfection.

So why don’t you remember it this way? I don’t know. No one remembers. They know of these three men – Edward de Vere, and Merrick d’Marison, and Stephan d’Valerian, and all the things they did. They sometimes remember the woman – me, Avriel, now a background character in a much grander story. But no one remembers the truth. In one brief moment everything’s changed, and I do not know how, or why.

All I know is that Edward, my husband and the love of my life, does not remember who I am. But that is not as bad as it would seem. For, you see, except for three blessed hours each day, from nine until midnight, I don’t remember him, either. Or, to be more precise, I don’t remember that he was once mine. He’s just an attractive soldier who once was the Captain of the King’s Guard but now fell from grace, and all I can do is hide in the shadows and long for him.

It used to hurt, the remembering. At first it would paralyze me. I used to think I was mad. I would sit in my room and stare at the wall, wondering what to do. There was no one to talk to, to turn to. Everyone had been taken from me.

Oh, I cannot lie. It still does hurt. But I force it away, and instead I consider the day behind me, and the day ahead of me, and I take out some paper and write down some notes. They are different, depending on what needs to be accomplished. I place each note where I will see it in the morning, out of sight of the mirror, because there is a fae courtier who controls me, who can see through mirrors, and who would not allow me to proceed.

One step at a time. We will solve this. I will have my life back.

Welcome Cindy Lynn Speer! Please start off by telling us a little about yourself.

Is The Key to All Things a single title, or part of a series?

It is mostly a stand alone book.  There are things I can write about for the sequel…I was careful to finish the story in a (hopefully) satisfying way, but there is definitely a possible war brewing, and a lot of places I could go.  I want to write more about the antagonist, Baramis, and his past…

Other love stories, in a way.  The epic folk-lore like stories and how they all live happily ever after…do they?  And while the book itself doesn’t really answer that directly, it gave me a great starting spot to create a really interesting story.

Please share your setting for The Key to All Things.

The setting is on the same planet as The Chocolatier’s Wife.  It is an island, surrounded by mist, a good part of it is divided by a river.  One half is rules by the fae, the other half by humans.  The main palaces for each stand on opposite hills from each other, across the river.

When I was thirteen.  I realized that I could write, that it was alright to write, and started doodling out stories.  I learned to write by reading, then writing whatever came to me, stories to please my friends, then reading some more.  My University degree is in Creative Writing, and it did help a lot – it really improved my technique.

I adore Neil Gaiman, Barbara Hambly, Bernard Cornwell, Terry Pratchett, Patricia Briggs, Jennifer Roberson…I will just stop right there.  What attracts me is strong, interesting characters.  For mysteries I am more interested in the character and the setting – like, what will the setting teach me?  Or will I enjoy my trip (so to speak) there?

I think I would like a roundtable discussion about folklore, and it would have Neil Gaiman, Charles deLint, Ellen Datlow and Seanan MacGuire…and I would research because I bet there are newer authors I am missing.

I do historical combat – I love Italian rapier but I also study two handed sword.  I like to sew and embroider.  I am part of the SCA (it’s basically a medieval non-profit educational group, I call it medieval re-enactement but am told that is inaccurate, but I think it is a short way to give people an idea what we do.) and so I make my own garb…and I am trying to learn how to make my own jewelry, because I love Tudor Era bling!

I live on a pretty lonely road, and I had one summer where the weirdest stuff just kept happening.  One time someone threw a bunch of women’s shoes and broken CD’s on my front lawn next to the road, someone erected a cross and a little offering down the road from my house, and when I went out for groceries once, someone had gotten tossed out of a car and left!  I am hoping I never have a summer like that again it was…taken separately, and even as I write it, it must seem lame, but at the time, together?  It was very disconcerting.

Be kind to yourself.  I say this a lot, so I apologize if you’ve heard it before, but I know very well how hard it is to balance life and art.  I am lucky in that I share a house with my mother and she has always been very much “writing is important” – but so often the people in your life will see your writing as an extra hobby, something you can put down and ignore for months.  Something that is not really, in the scheme of things, that important.  And as you spend hours working, hours keeping your life going – it is easy to put off writing.  Because it is solely your own.  Your time.  Your mind.  And so you will, because the only one you are urging is yourself, and is is always easier to let yourself down.  You will be too damn tired from work, or you will need to do all these house chores.  And then, perhaps, you will get mad at yourself.

Try not to.  Forgive yourself.  I see all sorts of opportunities people who have been writing for less time have been getting, and while I am super happy for them and not jealous, I can hear a voice inside my head going “If you’d worked harder, you’d have these chances, too.”  You can’t sabotage yourself that way.  Your life is playing out the way it is.  You can’t go back in time, only forward.  So pick up your pen, open your word processing document, whatever, whenever you can, and nibble away at it, work when you can, make it a habit if you can, and just keep going. 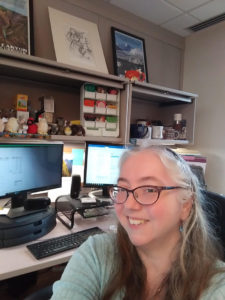 Cindy is the author of the Amazon bestselling The Chocolatier’s Wife, and it’s sequel, The Chocolatier’s Ghost, among others, including the brand new Key to All Things.   She loves reading, taking road trips, hiking, pretending to garden (really, I need to feed my poor tomatoes) and sword fighting.  You can find out more about her at http://www.cindylynnspeer.com or her facebook, https://www.facebook.com/cindylynnspeer/ and Twitter https://twitter.com/cindylynnspeer

Cindy Lynn Speer will be awarding a $25 Amazon GC to a randomly drawn winner via rafflecopter during the tour.