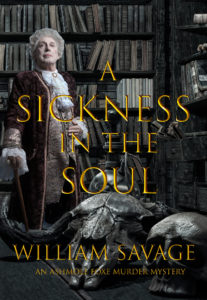 A Sickness in the Soul: An Ashmole Foxe Georgian Mystery

“Many people wear masks. Some to hide their feelings; some to conceal their identity; and some to hide that most hideous plague of mankind: a sickness in the soul.”

Ashmole Foxe, Norwich bookseller, man-about-town and solver of mysteries will encounter all of these in this tangled drama of hatred, obsession and redemption.

This is a story set in the England of the 1760s, a time of rigid class distinctions, where the rich idle their days away in magnificent mansions, while hungry children beg, steal and prostitute themselves on the streets. An era on the cusp of revolution in America and France; a land where outward wealth and display hide simmering political and social tensions; a country which had faced intermittent war for the past fifty years and would need to survive a series of world-wide conflicts in the fifty years ahead.

Faced with no less than three murders, occurring from the aristocracy to the seeming senseless professional assassination of a homeless vagrant, Ashmole Foxe must call on all his skill and intelligence to uncover the sickness which appears to be infecting his city’s very soul.

Can Foxe uncover the truth which lies behind a series of baffling deaths, from an aristocrat attending a ball to a vagrant murdered where he slept in a filthy back-alley?

‘Most irregular!’ the coroner spluttered. ‘This is mere hearsay, doctor. I cannot admit it into evidence unless it is vouched for by the physician who you say was there at the time. Is that gentleman in the court?’

‘Does anyone know where he may be found?’

The clerk to the court stepped forward — most reluctantly, Foxe thought. With much hesitation, he explained that, unfortunately, the man was not present at the inquest. Nor could his evidence be sought.

‘From what I have been told by those who encountered him that evening, sir, he was visiting from London. He said he intended to depart to return home on the first mail coach the following morning.’

‘God’s teeth!’ the coroner exploded. ‘Did anyone think to make a note of this man’s name or ask where he lived?’

Whether this was an understandable comment about needing to attend an inquest on one of his sons, or an expression of disgust at being forced to sit, hugger-mugger, with tradesmen and other common people, was not entirely clear.

‘Is it true, your lordship,’ the coroner said, ‘as the medical examiner here has said, that this physician no one can name made a remark about the temperature of your son’s … body … and the extent of … um … stiffening?’

‘Exactly as reported, my lord? Nothing else added and nothing omitted?’

‘Can’t recall. Rather upset by it all, as you might imagine.’

The coroner struggled bravely forward. ‘You did not ask for this physician’s name or his address?’

‘I am not in the habit of bothering myself with the personal details of tradespeople,’ came the viscount’s cold reply. ‘I passed what I could remember on to the fellow now on the stand. Up to him after that.’ He then sat down, making it clear he would entertain no further questioning.

Can you describe your dream home?

A modest Georgian house, somewhere near the sea or a large river, with a garden big enough to walk in for an hour or more each day.

If we were to come to your house for a meal, what would you give us to eat?

I doubt I would even suggest it. We live very quietly, and our house is quite small. I’d be much more likely to suggest we ate in a suitable restaurant. I’d want to know what kinds of things you like to eat, so that I could chose one which was appropriate. I enjoy food, but I’m not any kind of ‘foodie’.

Tell us about the absolute BEST fan letter you have received.

I’ve had some nice emails, but I can’t say any of them have been especially interesting. I’m very happy when people like my books, but I have to be honest and tell you that I write for myself, not for anyone else. I would never change my approach simply to gain more readers or anything like that. That’s why I publish all my books myself. I couldn’t abide having an agent or a publisher telling me what I should write and what I should not. We would come to blows very quickly!

Say your publisher has offered to fly you anywhere in the world to do research on an upcoming book, where would you most likely want to go?

As I said in my last answer, I am my own publisher, so it would never arise. Besides, all my books are set in England, mostly within twenty miles of where I live. There’s more than enough interest locally to keep me going for many years. I would have no reason to want to go anywhere else, unless it was to consult some materials which had somehow made their way overseas. Thanks to the Internet, that probably wouldn’t arise either. I find the small and local infinitely more fascinating and interesting that the global.

Who designed the book cover for the book you are touring?

I did. I design all my own book covers. That way I have no one to blame but myself if they don’t come out right. I’m pretty handy with a computer, though I say it myself. This current cover for “A Sickness in the Soul” uses stock images under licence, mixed together and altered in Photoshop. 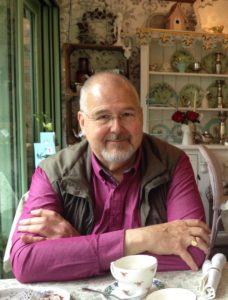 I started to write fiction as a way of keeping my mind active in retirement. Throughout my life, I have read and enjoyed hundreds of detective stories and mystery novels. One of my other loves is history, so it seemed natural to put the two together. Thus began two series of murder mystery books set in Norfolk, England.

All my books are set between 1760 and around 1800, a period of turmoil in Britain, with constant wars, revolutions in America and France and finally the titanic, 22-year struggle with Napoleon.

The Ashmole Foxe series takes place at the start of this time and is located in Norwich. Mr Foxe is a dandy, a bookseller and, unknown to most around him, the mayor’s immediate choice to deal with anything likely to upset the peace or economic security of the city.

The series featuring Dr Adam Bascom, a young gentleman physician caught up in the beginning of the Napoleonic wars, takes place in a variety of locations near the North Norfolk coast. Adam builds a successful medical practice, but his insatiable curiosity and  knack for unravelling intrigue constantly involve him in mysteries large and small.

I have spent a good deal of my life travelling in Britain and overseas. Now I am more than content to write stories and run a blog devoted to the world of Georgian England, which you can find at http://www.penandpension.com. You can also follow me on Twitter as @penandpension.

The Fabric of Murder http://relinks.me/B00W3SDJW8

This Parody of Death http://relinks.me/B06XDNY81B

Bad Blood Will Out http://relinks.me/B079RCVQ4X

A Sickness in the Soul https://www.amazon.com/dp/B07WF3Y4VJ

The Code for Killing http://relinks.me/B01A2BY1LU

A Tincture of Secrets and Lies http://relinks.me/B075LM2TZP

Death of a Good Samaritan https://relinks.me/B07NLCGK2Y