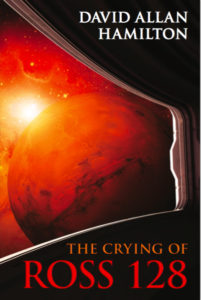 America has splintered into various independent republics after a brutal civil war. Against this backdrop, space exploration is on the cusp of new technological breakthroughs. Jim Atteberry, a mid-30s English professor at City College in San Francisco, spends his free time listening for alien signals on the amateur radio astronomy bands. His life as a single parent to his precocious daughter is turned upside-down when he hears an intelligent cry for help from the Ross 128 system and realizes we are not alone. This signal unleashes a chain of events pitting Jim and his brilliant, mysterious colleague Kate against a power-hungry scientist with his own secret agenda. Jim must learn the truth about the signal, the strange disappearance of his wife Janet, and the meaning of true love before it’s too late in this first contact thriller.

I wish I had a crazy off-the-wall answer for this question, but alas, I don’t. The only things you’ll find under my bed are dust bunnies. And they hang around, multiplying, until I haul out the vacuum  and battle them mano a mano. Mind you, I had some ants poking around upstairs at one point. I gassed the crap out of them.

Easy. I was about four years old and my mum was bringing me and my siblings to Canada from England by boat. My older sister was 6 and my younger brother was about 2 or so. One day at lunch, I needed to go to the washroom, and my mum asked if I knew how to find it. Of course, I said. But I had trouble remembering once I started walking down this hallway. I ended up going past the kitchen, through various corridors. Finally, I found myself in a stair well, crying because I was lost and terrified. My sister found me and took me back, and all worked out well in the end. But I’ve never forgotten that feeling of dread and terror I felt back then.

Normally I don’t. One of my writing spaces is at my dining room table and I usually write there when I’m alone in the house, so I never listen to music when I’m working there. Other times, I will. For example, I also write in the library at Carleton University and when I’m there, I’ll put on my earphones and listen to one of those six hour gentle relaxing music things on youtube.

Well I’m already working on the sequel to The Crying of Ross 128 and I hope to have the final manuscript ready for publication by the end of this year and therefore distributed early in 2019. But on top of that, I also run writing workshops at Carleton University, and these take up a lot of my time and energy, but I love working with emerging writers and helping them develop their voices and their craft.

I began plotting The Crying of Ross 128 near the end of September 2018, and the first draft was finished just before Christmas, so about three months for the first draft. Revisions and editing took another three months, so half a year in all.

“How long does it take a subspace signal to travel from Ross 128 to Earth?” he asked.

Atteberry recorded the time on his notepad, then looked at the screen. “Is there any history of alien signals coming from Ross 128?”

“Negative. Although in 2017, unknown signals from that system were received at the University of Puerto Rico at Arecibo. They were later dismissed as Terran satellites.”

Ghost signals. That happened sometimes due to the multitude of satellites orbiting Earth back then, and now around the moon and Mars. Signals would bounce and echo off them all the time, like ripples in a pond bouncing off rocks and plants.

“Speculate as to the origin of this signal if it’s a ghost.”

“If the signal is a ghost, it is most likely an artifact of the Second American Civil War circa 2070. The Northern Democratic States and the Confederate States often used ghost signals as decoys to confuse enemy communications.”

So that’s it, Atteberry thought, he’s been chasing old civil war ghosts. Yet the question of subspace remained, and, as far as he knew, neither side in the civil war used the emerging FTL technology. It wasn’t sufficiently developed until after the new republics separated.

“What is the likelihood that these Ross 128 signals are satellite ghosts?”

“What’s the probability the true source is the Ross 128 system itself?”

Atteberry leaned forward on his workbench and realized the results were inconclusive. “What’s the probability that these signals are naturally occurring… a pulsar or a quasar for example?”

“Improbable. There are no known humans in the Ross 128 space.”

Atteberry feared asking the next question; he swallowed hard. “Alien?”

David Allan Hamilton is a teacher, writer, and multipotentialite. He is a graduate of Laurentian University (BSc. Applied Physics) and The University of Western Ontario (MSc. Geophysics). He lives in Ottawa where he facilitates writing workshops and teaches. When not writing, David enjoys riding his bike long distances, painting, and knitting.