This post is part of a virtual book tour organized by Goddess Fish Promotions. Kristal Dawn Harris will be awarding a $10 Amazon or B/N GC to a randomly drawn winner via rafflecopter during the tour. Click on the tour banner to see the other stops on the tour. 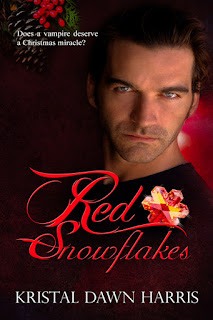 Forensic photographer, Dena Williams, has spent her life trained to see what others cannot. Vampire, Dimitri Kovac, has waited every Christmas for a miracle that does not come. In the Oregon wilderness, during a snowstorm, these two destined souls collide. Dena’s only hope of survival rests in a vampire with the heart of a poet. Dimitri only has five days to win a skeptical woman’s heart. As the Christmas tree lights burn brightly and the snow continues to fall, will Dena succumb to a vampire’s charms? With so little time, can Dimitri win her love?

Dena stood her ground waiting until he stopped directly in front of her-toe to toe. Her eyes lifted from his broad chest to his face. His breath caressed her skin in whispery touches. This close she could see the small lines around his eyes and the long length of his eyelashes. She’d photographed numerous crime scenes and witnessed the arrest of several criminals, so she knew the eyes of a killer. This man did not have those eyes. Predator yes. Murderer no. The sea-blue depths emanated tranquility, but there was something else there as well.

Trained to see things others didn’t, Dena’s head tilted while studying him trying to see what evaded her eyes. Engrossed in his features, almost drawn to him on a level her mind didn’t understand, her body leaned forward. He didn’t move away, but his pupils tracked every move she made. Dena focused on his eyes letting her own senses expand. Something was different in those sea-blue depths. They say the eyes are the mirror to the soul, but his seemed more like a mask. Her body jerked when the black of his pupils bled into the white until his sockets completely blacked out, then shifted back to their normal sea-blue color. Curiosity led her. One foot slid between his as she moved even closer until their bodies brushed. For some odd reason, she wasn’t afraid. “What are you?”

What’s the matter with you?  Harlie, you read a paranormal romance with a vampire?  And it was Christmas themed?  I’m sure most of yall thought I must have been out of mine but I wasn’t.  I needed to read something different and this book delivered on all counts.  Since I lost interest in all things paranormal when Twilight came out, I’ve been very picky and I tend to yawn at the PNR books that have come out in the last decade or so.  Ms. Harris has written a gem of a novella that will tug at your heartstrings, make you wish for snow and want to decorate for Christmas right now.  No worries on decorating for me.  I don’t do that until the day after Thanksgiving.  But I am thinking more candles…

I will have to say that this book is shorter than most and it mostly features just Dena and Dimitri.  Ms. Harris didn’t muck up the story with extra characters that you have to keep up with or any fluff for filler.  This is a book about a vampire that is dying, waiting for his mate and a woman that sees things that others can’t.  The above excerpt is a perfect example of Dena’s personality.  She takes no prisoners, asks questions and goes with her gut.  I loved her.  A bit lonely when she discovers Dimitri, she is all in.

Dimitri broke my heart at times.  A vampire with a soul and a mate to convince.  I admired that he didn’t pressure Dena at all.  He was honest, forthright and fell instantly in love with her.  Ms. Harris gives us a bit of a backstory on Dena and Dimitri but considering that the book is shorter with minimal characters, she does an excellent job with both of them.  I loved the give and take that Dena and Dimitri had with each other.  The joy of Christmas is alive with them and it shows in Ms. Harris’ writing.  It flows and there is never a dull moment.  In fact, the ending was a bit of a shock to me.  I never saw it coming and neither will you.  Great job.

If you are looking for a great Christmas read that will get you in the spirit, this is it.  Just keep in mind that there is a vampire, a mate to be had and a red snowflake to find.  Oh yes, don’t want to spoil that little gem in the book.  He he! 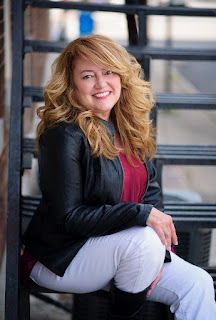 Kristal Dawn Harris is an American author, born in Middletown, Ohio. She currently resides in Ohio with her husband. Kristal has been married for 27 years and has two children. She graduated from Carlisle High School, then furthered her education at Miami University. She has a business degree in Accounting Technology. Kristal spent twenty years working as an Office Coordinator in the hospital until she released her debut novel, “The Rings of Faolan-Emeralds,” through The Wild Rose Press.

In 1999, Kristal suffered a debilitating disease called “Guillain-Barre Syndrome.” This rare disease damaged the nerves in her body requiring the use of drop-foot braces in order to walk. Kristal considers herself a survivor and encourages anyone with a disability to follow their dreams.

Kristal is considered a hybrid romance author since she published “Hand-Carved Wolf” and “Thief of Hearts” on her own. Kristal is an avid reader who enjoys romance from all genres, but paranormal is her favorite.