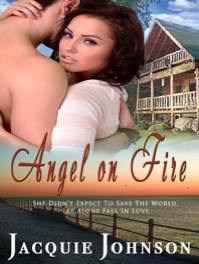 Please welcome debut author, Jacquie Johnson to Harlie’s Books.  She has gracely answered ten questions for Harlie.
Harlie’s Review is below the interview.
Top ten things you don’t know about me:

I wore silk until I had kids.  Now, I wear a mix of both.  Cotton’s easier to wash and the amount of laundry I do increases each year as the kids grow.  I thought sending one child off to school would reduce my laundry duties but that hasn’t worked out according to plan.  Still, I can’t wait for the days when I can go back to silk.  Neither can my husband.
2.  Champagne/beer/wine?
I’m a white wine fan, preferably Chardonnay or Riesling.  It is not uncommon in the evening for me to be writing away with a glass within reach.  My husband laughs a bit at this.  I am a self-professed lightweight.  A big night for me would be a glass and half.
3.  Plotter/pantser
I’m a combination of both.  I plot first but when my muse dictates a twist or turn, I go with the flow.  I’m a planner who has learned that some of the best things in life come as a surprise, like my twins.
4.  Describe your workspace
I work primarily at a square wooden table in the middle of my kitchen.  Since I homeschool, my younger daughters do their schoolwork at the table as well.  This way I’m available for questions as needed.   On rare occasions, I’ll work at a small desk in my bedroom when I need quiet, not that I ever find absolute silence in my house with three kids, a husband and a dog.
5.  Sports fan or just tolerate it?
I’m not a sports spectator by nature.  I’d rather play than watch.  I’m not the type to turn the TV on for a Bulls, Cubs, or Bears game — can you guess where I live?  I grew up playing basketball, softball and volleyball and even played softball in college for a while.  Admittedly, I do enjoy watching my kids compete in gymnastics and tennis but I think most parents do.
6.  Who is your biggest influence on writing?
That’s a tough question to answer.  I’m a voracious reader and love all kinds of books.  Tom Clancy is one of my favorite authors, but I also enjoy Nora Roberts, Johanna Lindsey and John Jakes.  The one thing they all share is the ability to create an entertaining story and bring their characters to life.
7.  Favorite food –
Potatoes are my favorite food.  You can bake them, mash them, fry them and even make soup from them.  Ice cream is a close second.
8.  When did you start writing?
My first foray into writing occurred when I was in elementary school and I entered the local short story writing contest.  Although I didn’t win, the judges commented on my active imagination.  While the other kids wrote about sports and playing at the park, my story involved a female orphan living in Victorian England who was run over by a carriage.  Obviously, I was heavily influenced by what I was reading myself, (Jane Eyre and Wuthering Heights).  I stopped writing fiction after high school, setting what I thought were childhood dreams aside to focus on college, law school and a legal career.  Needless to say, I continued to draft essays, research papers and eventually legal briefs.  My aspiration to write a novel returned a few years after I stopped practicing law to homeschool my daughters.  I missed writing and realized that this was my chance to let my imagination run free and write what I wanted.
9.  If money were no object, where would you like to live?
I’d still live in my not-so-little anymore hometown.  It’s a good place to raise a family.  However, once the kids were in college, I’d travel and see the world.
10.  What’s next for you?
I’m planning to release my second novel, Dilemma, in June.  Dilemma is the story of Alexis Winters who has just started a new career and life in Chicago.  As she learns that practicing law is about more than trust and justice, the young labor and employment litigator struggles to balance her ethical obligations to her client with her own values.  When childhood friend turned investigative journalist Ryder Prescott insists that her client is involved in wrongdoing and that he needs her help to prove it, Alexis is trapped between a desire to help her childhood love, do the right thing and protect her career.  Alexis walks a fine line to find out how far is too far and when rules are meant to be broken while she and Ryder grow closer in spite of the history between them.
I’m also working on Sean and Emily’s story, second book in the Angel Investigations series, and on a young adult novel.
Blurb:
All Angela wants is to understand why her father, security specialist Mac McKenzie, dropped dead on a sidewalk in Boston. Instead, she is thrust into the midst of an international conspiracy when she discovers that her father was working on a classified project at the time of his death. Now, the FBI, a terrorist and a killer have her in their sights.

Former Navy SEAL turned undercover operative, Chase Romero thinks his boss is overreacting when he orders Chase to small town America to protect Angela. But he changes his mind when her home is burglarized and “accidents” begin to happen. The real question becomes, how can he keep her safe if he keeps tripping over his own heart?

After shooting an intruder, Angela flees the scene, and the FBI issues a warrant for her arrest. On the run for her life and her freedom, she places her trust in Chase. As they travel from New England, to the nation’s capital, to the shores of Lake Michigan, the trail – and their attraction – grow hotter. Together, they team up to prevent a global financial market meltdown and face a killer who will stop at nothing to get his hands on the project Mac protected with his life.
Review:

When I closed this book, I couldn’t decide how I was going to talk about it.  This book is a romantic suspense with some hilarious moments thrown in and there were parts of the book that were laugh out loud funny for me.  At times with Angela, I kept picturing Ben Afleck as the young Jack Ryan.  (Worship Jack Ryan)  This is good thing…

When Angela goes home to handle her dad’s affairs after he suddenly dies in Boston, things just don’t seem to add up for her.  Why would a reasonable healthy man drop dead?  What was he protecting that would cause his sudden death?  Good questions for Angela to ask but when she starts asking, the “accidents” start happen to her, she starts questioning every thing in her past.  She decides to investigate her dad’s death and that lands in her in nothing but trouble.

Enter Chase.  Chase’s boss just so happens to be Angela’s godfather and has ordered Chase to protect her.  Chase is one of those hero’s that just grabs you from the start and doesn’t let go.  He will do anything to protect the woman he is beginning to fall in love with and won’t admit it.  Trying to keep Angela from harm, chasing the bad guys and dealing with his boss keep Chase busy but makes him think about his life and what he wants out of it.

I loved this book from the start.  Angela is smart, sexy, resourceful and a raw newbie when it comes to field work for the FBI.  She usually sits at a desk so being chased, shooting someone and having a partner is a somewhat confusing thing for her.  Factor in falling in love with her protector and dealing with family secrets, it would make any one’s head spin.  Not our Angela.  She plunges forward and with the help of her friends and Chase, she becomes stronger and more sure of what she really wants out of life.  Chase has some life issues to deal with too.  In love with Angela, he knows that the life he had led is not one way for Angela.

I didn’t see the twist at end and it was a great surprise.  The secondary characters that were introduced were great and I can’t wait for Sean’s story.

I highly recommend Angel on Fire for anyone that likes a fast paced, sexy romantic suspense story.  I can’t wait for more of this series and to see what happens to Angela’s two friends and Sean.

4 1/2 Harlie’s and a recommended read

17 thoughts on “Angel on Fire by Jacquie Johnson-Interview/Review”