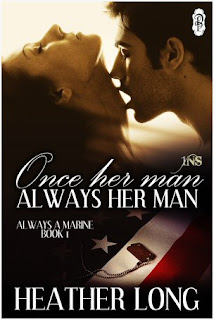 Once Her Man, Always Her Man
Book 1, Always a Marine series

Fulfilling a favor and executing a business plan, Luke Dexter arrives at Dallas’ Sybarite Club for a one-night stand. He never imagined he’d come face to face with the woman he left behind a decade earlier.

Rebecca Rainier fell in love with Luke Dexter in high school and was crushed when he dumped her to join the Marines after 9/11. Set up on a 1Night Stand by her business partner, nothing could prepare Rebecca for who her date is.

Can Luke and Rebecca bridge the pain of a decade-long abandonment, in one cold Texas night?

Review:
Once her Man, Always her Man is a short sweet novella under the umbrella of the 1Night Stand imprint by Decadent Publishing. It’s the first book in Heather Long’s new series Always a Marine and introduces us to sexy Marine Luke Dexter on the night he’s set up on a blind date with his high school sweetheart. Rebecca Rainier never stopped loving Luke even after he dumped her to join the Marines after 9/11. Rebecca and Luke have one night to figure out if their love is still hot enough to warm up even the coldest Texas night.
I’m going to admit I don’t usually pick up such short stories but since I love Heather Long’s backlist I decided to take the chance. I’m glad I did. Yes, it’s short but the way Ms. Long handles the story pulls you in instantly and doesn’t let go. It’s a hot sexy read with all the emotion I love to find in my romance stories.  Luke is everything Rebecca has ever wanted and she’s just what he needs. The scenes are steamy but even with such a short amount of time to tell the story; Ms. Long manages to put enough backstory that it doesn’t feel rushed. I highly recommend this story if you like your stories hot and emotional but want a fast read.

4 Harlie’s and a recommended read 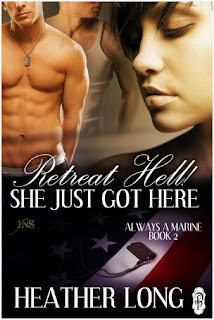 Blurb:
She’s one of the few…

Jazz has been one of the guys for over a decade, serving her country with distinction, but she longs to explore her femininity, to be desired as a woman, to flirt, cavort and fulfill every sexual desire. When her mother, of all people, signs her up for a 1Night Stand, she’s not sure whether to be exhilarated or pissed. She flew all the way to Las Vegas on the promise of a total escape, to be Jasmine for just one night, because tomorrow, she plans to re-up for another five years.

They’re two of the proud…

Logan Cavanaugh grew up across the street from his best friend and ‘brother’ Zach Evans. Inseparable, the two shared everything until a year before when an IED attack took out the Humvee they traveled in with Colonel Dexter. Zach suffered a concussion, but Logan’s injuries were far more extensive. After a year of physical therapy, he can walk, but he’ll never run or love a woman again, or so he fears. Logan seemed ready to accept his impotence until Zach came home. Now the ‘brothers’ are in Vegas to meet the perfect woman, the woman who can heal Logan’s confidence and masculinity.

They’ve shared everything, but will one night be enough?
Review:
Retreat Hell! She Just Got Here is the second installment in Heather Long’s Always a Marine series. Jasmine “Jazz” Winters, has always been one of the guys, so she allows her mom to sign her up with 1Night Stand. She flies to Las Vegas for her date and her greatest fantasy of a night with two men, Logan Cavanaugh and Zach Evans are happy to fulfill her every fantasy in a night of passion. These two men are as close as brothers and served together as Marines, until an IED attack side lined Logan, leaving scars and making him feel like he’ll never love a woman physically again. Jazz is just the Marine to help with Logan’s problem and love Zach too.
I loved this book.  Something about the heroine being a strong Marine, who doesn’t see herself as feminine enough in her everyday life, makes this story just stand out for me. The tenderness and care she shows for Logan, just makes me love her more. I read a lot of ménage romance but this story has stuck with me and I can see it continuing to do so.  It’s another short novella like the other books in this series, but even in the short night they have together you can already feel them falling in love.  This story leaves off with the idea that this three will be getting together again soon, and I really hope there is a follow up story so I can enjoy these characters all over again.

Quote from reviewer Sheri,  “They renewed my love of novellas.”

To get started can you tell us what you are working on or have coming out?

How much time do we have? 2012 has been a very exciting year for me with several releases coming out back to back.  Currently, I am awaiting the release of the next Always a Marine 1Night Stand tales: Proud to Serve Her and Her Marine. They are due out June 26thand July 3rd respectively.   Soon after that will be The Taming of the Thief in mid-July which is the second book in The Fortunate Buddha trilogy.

As for what I am writing right now, I’m finishing up No Regrets, No Surrender, the novel follow up to Retreat Hell! She Just Got Here and then I get to go back and play with my superheroes for a book to follow up Yesterday’s Heroes, which releases in September from Carina Press.

What made you realize that writing was it for you? Do you write full time?

From the moment I realized that actual people wrote those books I loved, I knew I had to be one. I was an avid reader from a young age, literally devouring hundreds of dollars worth of books and never seeming to satisfy that craving. So writing really is like being a kid again, immersing myself in worlds with these characters and enjoying the ride.  I do write full time in the sense that I am at my keyboard working on stories or editing for well over forty hours a week. It’s not paying all the bills yet, but I’m pretty happy with my progress.

What is a typical day of writing like for you?
Get up, let my dogs out, feed my cats and where I used to make a cup of coffee, now I make a power shake. I’ve been on a diet for the last few weeks, so it’s modified a lot of my habits, but I’m really seeing success both on the writing and weight loss front.  Once the dogs are settled, I head out to the garage where I can work on my laptop away from the distractions of the Internet. That’s where a lot of the magic happens whether I have 1, 2, 3 hours or all day to write. New words are almost always reserved for the beginning of the day when I’m freshest while I tackle edits in the afternoon or evening.
Do you have any guilty pleasures?
Of course. What is life without them? But currently many of my favorite shows are on hiatus for the summer, so it’s power-writing time. However–eek,gasp–I gave up Starbuck’s which is not something I thought I would be able to do.
What is your favorite type of hero to write and why?
That’s a hard question. I love all my guys. I love them because whether their grumpy and curt (Cody, Brave Are the Lonely & Jacob, Jacob’s Trial) or charming and dashing (Max, The Love Thieves) or just stand up, truly honorable men (Sam, Marshal of Hel Dorado, Luke, Once Her Man, Always Her Man) – it’s how they love their women that makes them a hero to me.  These are the guys to go to in order to get something done.
If you were stranded on an island, what and who would you take with you?
Fresh water and Chris Hemsworth.  Yep. That’s what I’d take.
Which genre(s) do you write and is one of them your favorite?
I’m giggling here because I don’t have a favorite–it’s why I write in so many. My eclectic tastes in reading translated into what I write from Paranormal Western Romance, Paranormal Erotic Romance, Romantic Suspense, Contemporary Romance, Military Romance and now a Superhero Romance that is soon to be released.  I suppose you can say I have a thing for paranormal because it’s a more regular theme, but I love them all.
If someone hasn’t read any of your work, what book would you recommend that they start with and why?
Hmm–if they enjoy more erotic reads, I’d send them to my 1Night Stand’s from Decadent. The Always a Marine series holds a very special place in my heart. They are sexy, saucy, and delicious to read.  If they enjoy something a little bit different with an epic feel, I’d send them to my Fevered Hearts series because those books are paranormal westerns–they have all the magic and powers you could want against the backdrop of the wild west with more than a few spicy scenes thrown in.  If they wanted romantic escape, then my Fortunate Buddha trilogy offers romance, adventure, and humor–which is one of my favorite combinations.
Speed round:
Beer, wine, liquor or none?
Beer.
PJ’s or lingerie?
PJs
Boxers, briefs, commando?
Boxers – I like unwrapping the package
Top 5 favorite books?
Killjoy by Julie Garwood
A Kiss of Snow by Nalini Singh
Archangel’s Blade by Nalini Singh
River Marked by Patricia Briggs
Fair Game by Patricia Briggs
Go to author for a comfort read?
Patti Briggs – I adore her books.
Tell us something that most people don’t know about you? (That you would be willing to share)
I really wanted to be an attorney when I grew up. I thought it would be great to be a crusader for the little guy, fighting against corporate greed and making a real difference in the world. When I was five, I announced I would be the first female President of the United States…
Hmm. I still have time for that.
About the Author:
Heather Long lives in Texas with her family and their menagerie of animals. As a child, Heather skipped picture books and enjoyed the Harlequin romance novels by Penny Jordan and Nora Roberts that her grandmother read to her. Heather believes that laughter is as important to life as breathing and that the Easter Bunny, the Tooth Fairy and Santa Claus are very real. In the meanwhile, she is hard at work on her next novel.
http://www.heatherlong.net
Http://www.facebook.com/HeatherLongAuthor
http://www.twitter.com/HVLong

11 thoughts on “Always A Marine, Books 1 & 2 by Heather Long-Reviews & Interview”