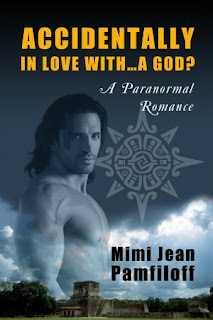 One hundred percent (100%) of all royalties received from the sale of Accidentally Married to a…Vampire from both B&N and Amazon THIS SUNDAY will be donated to The Breast Cancer Foundation.

To celebrate, Mimi Jean is giving away an eBook copy of not only ACCIDENTALLY MARRIED TO…A VAMPIRE, but ACCIDENTALLY IN LOVE WITH…A GOD, Book 1 in the “Accidentally Yours Series”, as well, to 20–yes, you read that
right, 20–lucky winners!

In real life, he’s an enigma. Maybe just a teensie jealous. Definitely overbearing. He’s also a voice only she can hear.

So who or what is he? He won’t say. But if she wants to be free, to be normal, Emma will have to trek to the jungles once ruled by the Mayans and find the forgotten ruin holding the answers.

However, the ruthless deity she’s about to unknowingly unleash on the modern world might not be so easily extracted from her life. Bottom line, he’s got enemies, and now, so does she.

With his golden face beaming, the man smiled as he stroked my sopping wet hair and cradled me against his warm, smooth chest. “I love this dream,” I said with a breathy voice, then stretched my arms above my head, gazing happily into the most striking set of luminescent, turquoise green eyes I’d ever seen.

To boot, they belonged to a breathtaking, masculine face, a face one would expect to see on the cover of a magazine named something like, I’m Way Too Hot to Be Your Man, or In Your Dreams, Honey.

Oh, yeah. Without a doubt, I’d topped myself this time. Sculpted cheekbones, thick dark lashes, chiseled jaw, and lips so full they simply had to be meant for kissing or eating something really juicy. He was way hotter than the specimen of perfection from my last dream, and bonus, he didn’t have that scary vibe. I reached up and ran my fingertip along the ridge of his hard-lined warrior nose.

“Emma, what in the name of the gods’ creation are you doing?” he scorned. “We really don’t have time for your immature little fantasies. We’re in the middle of a crisis. Do you not remember?”

I blinked and slowly moved my eyes from side to side.

Jungle? I was in the jungle. And my clothes were wet. Come to think of it, for a dream, I didn’t feel so hot. My lungs burned, my body felt like it’d been chewed up, and my head was throbbing. So, aside from the perfect man with long, damp, wavy black hair holding me in his arms, none of this felt like a dream. It felt…

“Holy Mother!” I pushed myself away and rolled into the dirt, pointing in disbelief. “Wha—you—you—?”

“Aaah. So eloquent as always, my sweet. It is astounding; you actually have a college degree, yet cannot find better words.” He pushed himself up off the ground.

As he rose, my heart stopped, started, then went into overdrive. His legs and spine straightened into a towering mass of unforgiving muscles. With shoulders like a lumberjack and thick, powerful thighs, I didn’t know if I wanted to run away or climb him like a tree. He was utterly enormous. Jolly Green Giant enormous. Except, obviously, not green. More golden brown. He was a gorgeous, towering mass of golden brown perfection.

No. Definitely not a cave-dwelling, wart-infested troll. Great. Just great. Now I knew I wasn’t crazy—Guy was definitely real—but now I also knew I was way over my head. He was gorgeous.
I stood in awe, my mouth gaping as my eyes attempted to register every rope of muscle, every capacious curve packed with power. Christ, he had to be at least seven feet tall.

“This can’t be possible,” I whispered, my eyes continuing to dart up and down the length of his body, stopping right on dark trail of hair that started just below his navel and continued down, down, down to his enormous beast of a—“Oh! You’re naked.” I turned sharply, but only to stop myself from reaching out to touch it; no man could be that…that…endowed. Wow. “This can’t be happening.” I covered my face.

“Emma,” he moved behind me, placing his powerful hands on my shoulders. A jolt shivered its way through my body.

I was wrong about the vibe. Way wrong. This man, or whatever he was, radiated hazard. He should come equipped with a set of blinking lights or flares. He was…“Bad. Very, very, bad,” I mumbled, pinching the bridge of my nose.

And pathetically, after everything that had happened, all I could think about was this naked, hard-bodied, glorious “man” who’d just permanently seared his image inside the storage compartments of my female DNA. All men from this day forward would have to survive a mental side-by-side comparison against him. They’d all lose.
Amazon |
B&N
Smashwords 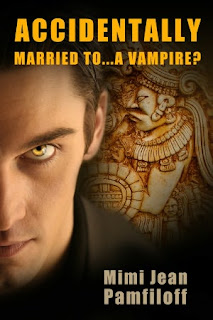 “If you love her, set her free. If she comes back, she’s yours. If she doesn’t…Christ! Stubborn woman! Hunt her down, and bring her the hell back; she’s still yours according to vampire law.”–Niccolo DiConti, General of the Vampire Queen’s Army.

Niccolo DiConti has faithfully served as leader of Her Majesty’s army for over a millennium, but he’d rather sunbathe in the Sahara than spend another grueling day under his demented queen’s command. However, no one has ever left her side and lived to tell. So when a powerful goddess prophesizes he will meet his salvation—a human woman he must turn into a vampire with her consent—he eagerly rises to the challenge. After all, how hard could it be to seduce a human female into taking the immortal plunge? Harder than he thinks. Because his mate won’t be born for another three centuries, and when he wakes up in the goddess’ tomb, not only is his life a mess, but his destined female isn’t about to settle for a coldhearted vampire. Can he win her over before it’s too late? Not if his enemies have anything to do with it.

On the night Helena Strauss meets the fierce, devastatingly handsome vampire who saves her life in the jungles of Mexico, she knows her world will be forever changed. Because an attraction this mind blowing only comes along once in a lifetime—or existence. And when he claims she is his one true mate, destined to be his for all eternity, it’s a fairytale come true. So what if her knight in shining armor is a vampire? Nobody’s perfect. But discovering the powerful, overbearing immortal doesn’t “do love”? Deal breaker. Helena will flee and set out to accomplish the impossible…sever the otherworldly bond between them. And it turns out, Helena is just the leverage Niccolo’s enemies need to break the mighty warrior and wipe out his people.

What the hell is this place?

Then Helena’s eyes focused on something else she couldn’t quite grasp. In the middle of the room, lying across a stone altar, was a naked man with dark symbols tattooed down the length of one arm. But he was not just any man. He was a male so perfect that words would catfight each other just for the honor of describing him. He was a god. A bona fide deity. He had to be. Because a normal man wouldn’t give her the urge to fall to her knees and worship at his feet. Or drool.

The torchlight licked his sculpted cheekbones, angular jaw, and full, sensual lips. Every capacious curve and ripple of hard muscle looked to be packed with raw power, and his size left no doubt that he’d been built in another time. A time when giant warriors roamed the earth, looking to rescue lame
tourists wandering the Mexican jungle at night.

In my dreams. Wait…this is a dream! It has to be.

“Move closer my sweet, delicious woman.” The deep voice radiated from every direction, filling the room.

Helena’s blood pressure crashed to the floor. She gasped as the weight of her body slammed back against the cold chamber wall to keep from falling.

“Hel-hello? Can you hear me?” Fists clenched, Helena waited for a response, her eyes continuing to soak him in. Every inch of him.

Was he real? No, he must be a statue. Too perfect. His full lips were built to nuzzle a woman’s neck. Specifically, her neck. And that hair—thick, long waves of black satin—was the kind a woman could grab fistfuls of while being driven insane by those lips.

Then there were the diamond-cut grooves of his abs, his perfectly shaped navel, the fine dark hair adorning his lower belly that trailed down to his awe-inspiring man-gear. The size and thickness, even in its slumbering state, was something women dreamed of and scores of artists throughout history attempted to immortalize in marble. He was every woman’s fantasy, she thought. And by every woman, she meant hers…’Cause I’m not gonna share.

Had the man said her name? No. Clearly, his lips hadn’t moved. The margarita amoebas were attacking her brain and she was losing her mind.

“Kiss me, woman. I command you,” the voice echoed, this time compelling her to obey.
Helena’s survival instincts gave her a hard kick, jarring her back into the horrific reality of the situation. But as she tried to regain control of her body, her tongue slipped from her mouth and wet her lips.

Traitorous tongue. Backstabbing lips. What the hell are you doing? Her body inched closer.

Blood? What the…? Every nerve in her body fired on all cylinders, but she couldn’t run even if her hair had been on fire. It seemed the harder she fought, the stronger the force controlling her became.

“Brush it against my lips, my love. I want to taste you when you kiss me.”

Without realizing it, her hand stretched down to coat her fingertips with the thick, nearly dried blood frofrom her knee. Trembling, she smeared it over his lips.

“No! No! Let me go!” Helena struggled, but her body’s betrayal persisted. Her head dipped, and her lips rested on his sensuous mouth. In that instant, the compelling force dissipated and her entire body lit up into one glorious pyre of life.

Had she been asleep the last twenty-four years? Because she could swear she’d just taken her first breath. Ever.

Holy hell, what was that?

The torches flickered, and the wind kicked up around her.

The altar was empty.

She crumbled to the cold, dusty floor. A pair of strong hands gripped her shoulders from behind.

“Oh, Christ. You…you’re behind me, aren’t you?” she whispered.

The deep dark voice replied, “Sì, my love. Stand, and let me see my mate.”

Helena slowly rose to face the naked god behind her.
Amazon |
B&N |
Smashwords 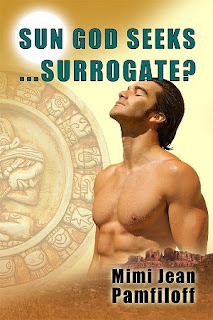 Twenty-four-year-old Penelope finds herself in all sorts of hot water, vaporous and otherwise, after agreeing to become a surrogate mother for an eccentric, wealthy, and devastatingly handsome man who isn’t exactly a man.

Before taking up a permanent residence in the San Francisco Bay Area, Mimi spent time living near NYC (became a shopaholic), in Mexico City (developed a taste for very spicy food), and Arizona (now hates jumping chollas, but pines for sherbet sunsets). Her love of pre-Hispanic culture, big cities, and romance inspires her to write when she’s not busy with kids, work, and life…or getting sucked into a juicy novel.

She hopes that someday, leather pants for men will make a big comeback and that her writing might make you laugh when you need it most.