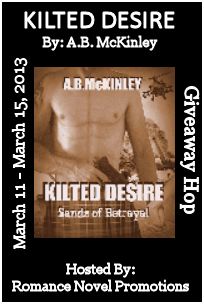 We are so pleased to take part in AB McKinley’s Giveaway Hop, celebrating his release of
his KILTED DESIRE Series!

What’s that you say?  You’re not familiar with Mr. McKinley?

Well, let us help you out!  Mr. McKinley certainly knows about all things Kilts, Tartan, and Scotland.  He has plenty of experience with the military, Romance novels…especially the covers and has a fantastic sense of humor.  He also knows how to write some pretty sexy and romantic books!  You can get to know him better the same way we did…through his books and his Facebook page.  We know you’ll want to thank us later. 😉

We’re giving away a $5 Amazon Gift Card.
You can pick a book (or maybe two) that feature a hot Scottish
hero. 😉

To enter, leave your name and email below plus a comment letting us know just what you like to see in your romance hero.
The winner will be chosen, at random after the close of the Hop.
There is also a tour wide giveaway of five (5) ebook for this title. To enter, complete the Rafflecopter form below. 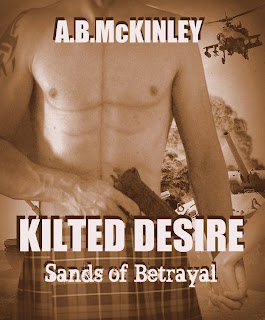 Scott Maclaren, a strong, Special Forces Scotsman, terribly injured during his tour of duty in Afghanistan. His journey begins with a broken heart after his wife leaves him for another man during his time in the hospital. Traveling across the Atlantic to visit family, his story now begins.

After years of physical therapy and being alone, things were about to look up. Katie Johnson, a beautiful Ohio schoolteacher, was where his ‘dream’ of passion and love were to become reality. Smoldering embers became a passionate, raging fire between them. A wanting and desire that burned for one another as neither had ever experienced before.

Scott’s love for Katie and her two girls would lead him to great lengths to make all their dreams come true, including a six-month security contract in the Middle East. The money would ensure financial security for life.

For more chances to win, be sure to follow the hop!