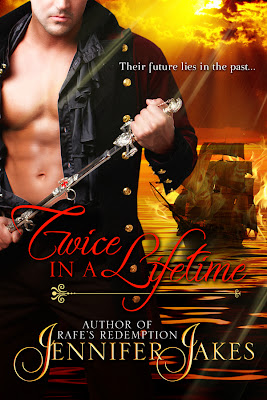 No-nonsense stuntwoman Isabella Douglas will do anything to stop an unwanted divorce and reclaim the happy life she had, even allow her old friend to concoct a magical spell to turn back time. But when the spell goes awry, Izzy finds herself trapped aboard a 1768 Caribbean pirate ship with a captain who’s a dead ringer for her sexy as sin husband, Ian. Convinced he’s playing a cruel joke, she’s furious – until she realizes he doesn’t know her or believe they’re married.

Trapped in a vicious cycle of past mirroring present, Izzy knows they only have days to find Ian’s sister and prevent disaster from striking a second time. If she doesn’t, their marriage will be destroyed again – along with the man she loves.

Ms. Jakes had me at the cover.  I love pirates and all that they encompass.  Sexy, driven, alpha but tender on the inside.  What kept me in the story was the witty dialogue and captivating story.

Izzy is a woman that is on a mission.  She doesn’t want the divorce that her husband has decided between the two of them.  Izzy still loves Ian very much and will do anything to stop the divorce.  When Ian shows up on the set of Izzy’s latest movie, she feels like something is off, something not natural.  With the help of her friend, Izzy gets the one chance to make things right with Ian.  What she didn’t count on was Ian not remembering you she was.

This book was a joy to read.  Quick, fun, sexy, hilarious in parts and a feel good read, too.  Ms. Jakes weaves time travel and the real world seamlessly.  One minute you are on the movie set and the next on a pirate ship.  The dialogue between Izzy and Ian was great.  I had laugh out loud moments and sigh worthy moments.  The sexual tension you could cut with a knife and Ms. Jakes makes it all worthwhile in the end.

I would highly recommend Twice in a Lifetime for anyone that likes a little magic with their story and a heart stopping pirate to fill your fantasies.

12 thoughts on “Twice in a Lifetime”