After her promotion from law firm Runner to Investigator, Kathleen Turner is learning the ropes of her new job from none other than assassin-for-hire Kade Dennon, a situation her boyfriend Blane Kirk is none too happy about. But the lessons with Kathleen take a back seat when Kade becomes a target. Previously untouchable, his enemies now know of the chink in his armor – his brother’s girlfriend. And Kade’s not the only thing coming between Kathleen and Blane.

From Blane’s inexplicable defense of a man guilty of a horrible crime, to a mysterious stranger from Kathleen’s past, to Kathleen’ risky investigation into human traffickers, the obstacles mount against a relationship that’s just begun to find trust again. While Blane considers a job offer that would take him back to the front lines in the war on terror, Kathleen is determined to pursue her new career, with or without his approval.
Unfortunately, her current case is far more dangerous than anyone knows. Someone close to Blane will go to extreme lengths to split them up, lengths that may prove worse than death for Kathleen. Kathleen, Blane and Kade must atone for the sins of the past and the present. The fallout will force Kathleen to a turning point…in her career, and her life.
Special Post from Author Tiffany Snow:

Thank you to Harlie’s Books for hosting me on the blog tour for TURNING POINT, the third book in The Kathleen Turner Series.  There will be a total of five books in the series.  Book four, OUT OF TURN, will be released on 12/17/13.
Writing a series presents certain challenges and rewards.  I love staying with my
characters for longer than just one book, giving them time to grow into their
relationships and their lives.  My focus is always on keeping the characters true to themselves and how they change and are affected by the events that happen to them.
Kathleen begins the series as very innocent and naïve in both life and love.  She’s
young, on her own, and trying to figure out exactly what she wants to do with her life.  Enter Blane Kirk, a Navy SEAL who’s currently a powerful, high-profile attorney who just happens to be her boss.  His playboy ways make Kathleen  hesitant to become involved with him, but in the end, how do you resist a gorgeous, sexy, alpha-male who’s got you in his sights?
Answer:  You don’t.

Things don’t always go smoothly in love and Blane and Kathleen’s relationship is no exception, with bad guys wanting to either put a termination on their relationship, their lives, or both.
An added complication is Kade Dennon.  Ex-FBI agent and cybercrime specialist, Kade now freelances in hacking…and an odd assassination (or three) on the side.  He and Kathleen are forced into cooperation, which begins a complicated relationship made even more so by the fact that Kade and Blane are brothers.
Murder, mayhem, drama, love, betrayal, jealousy and angst.  The trio of Kathleen, Blane and Kade weather all this and more as their lives unfold and are inextricably
entwined. 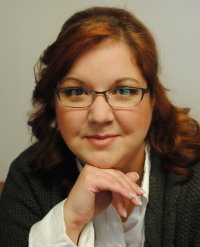 After working as a Microsoft Systems Engineer in the IT field for nearly fifteen years, I now write full-time and am thrilled to be a part of the Amazon Montlake family. My debut novel, NO TURNING BACK, is the first book in the Kathleen Turner Series. I write about things I love to read myself – a heroine who could be a neighbor or best friend; two men who each portray their own version of darkness and light, each vying for her affection; and a story that focuses as much on the characters as it does the suspense.
I’ve recently released Book Two in the Kathleen Turner Series, TURN TO ME, in which these same characters continue their lives and relationships. The third book, TURNING POINT, will be released by Montlake in 2013. There will be a total of five books in the Kathleen Turner Series.
As for me, I’ve been reading romance novels since I was way too young to read such things, have an unhealthy obsession for all things Doctor Who, prefer Pepsi to Coke and Absolut to both, think men who drink girly cocktails are wusses, have learned to never stop believing in my beloved St. Louis Cardinals, and can recite the entire scripts of When Harry Met Sally and Apollo 13. George Washington is cool, Bon Jovi still rocks the house, and Bruce Willis is the ultimate badass. Most of all, romance never, ever gets old.
Visit my website www.Tiffany-Snow.com for more information and special extras.

Tiffany is giving away, a grand prize of the winner’s choice, KINDLE Paperwhite or HD. Winner will be selected by Rafflecopter.  Each blog will be able to award one lucky commenter a Kindle copy or print copy of one of her KATHLEEN TURNER books, winner’s choice (Print copy is Continental US only) .