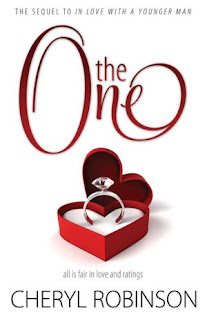 Title:  The One (Sequel to “In Love with a Younger Man”)

Also here is the link for the all the scheduled stops…  http://cblspromotions.blogspot.com/2012/02/blog-barrage-one-sequel-to-in-love-with.html

10 Romantic Destinations
10 Eligible Bachelors
1 Difficult Decision
A fateful encounter with a savvy young producer lands aspiring writer Olena Day the role of America’s bachelorette on the new reality show The One. There are just two problems: Olena despises reality TV, and technically she’s not single. What could she possibly hope to gain? A book deal? But Olena’s made it clear; she won’t resort to the stereotypical antics often portrayed by women on reality TV. But ratings rule and the producers have plans of their own to assure the show’s success—even if it means exposing some of Olena’s long-held and most embarrassing secrets.
Jason Nix is a former NFL superstar turned TV sports commentator. He’s been dating Olena off and on for almost a year. Financially, he’s set for life, but he isn’t happy. When Olena’s preoccupation with reality show stardom puts their relationship on the rocks, he meets a young woman from Dallas who captivates him in ways no other woman has. There’s something about the makeup-free, Bible-toting Texan that Jason can’t seem to get enough of, and soon makes him wonder whether she’s too good to be true, or if the real problem is she’s not Olena.
Step behind the scenes of the highly competitive and unique world of reality dating shows, in this relationship-driven page-turner that keeps delivering surprises.

LINK TO PROLOGUE AND FIRST CHAPTER:

ABOUT THE AUTHOR:
Born in Detroit, Michigan, Cheryl Robinson has a Bachelor of Science degree from Wayne State University. Her passion for writing was sparked while taking a fiction writing course as a college elective. She began her literary career by self-publishing two novels before acquiring a literary agent and then a publishing deal. Remember Me was her sixth novel with New American Library, an imprint of the Penguin Group.
In January 2012, Cheryl embarked on her own new beginning with the launch of her independent publishing company Rose Colored Books. She lives in Central Florida and will release The One on February 14, 2012. She is currently writing her ninth novel, Like Mom.
Website:
http://cherylrobinson.com

9 thoughts on “The One Book Barrage with Giveaway”