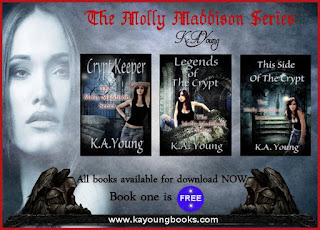 The third installment of The Molly Maddison Series is available now.

This Side of The Crypt

Molly Maddison stands in the arms of Death, at the mercy of those who understand her world far better than she does. A creature of the night has her brother, but Molly will never allow her brother’s captor to take away the only family she has left even if that means damming the universe in the process.
For Molly nothing ever goes as planned. As the enigmatic Levi and the sensual guardian Damon vie for her body and soul, another secret of her past is revealed that just may shed some light on who and what Molly is along the part she is expected to play in this new world.
As the future unfolds, Molly comes face-to-face with soul shattering truth—about herself, her family, her best friend Jewels and Levi.
Links –
Amazon US – http://amzn.to/1KuA5tt
Amazon UK – http://amzn.to/1KuA9JG
Barnes & Noble – http://bit.ly/1KuAewW
iBooks – http://apple.co/1GQcZpY
Nook UK – http://bit.ly/1H2I1yb
Kobo – http://bit.ly/1Hxw2tN
Smashwords – http://bit.ly/1LhhmSj
Not started this Series yet? You can start for free with…

Molly Maddison grew up in a funeral home that unfortunately backed up to the largest Insane Asylum in the state. Very few understand what happens after death, Molly does. While other children were playing in the park with their living friends, Molly was in the cemetery playing with the dead. To say she is troubled is an understatement.
Now Molly has a new plan, to attempt to lead a normal life, and ban the contact with any of the dead. Realizing that she is madly in love with one of them was never part of that plan. However neither life or death ever go as planned and Molly is called upon to perform her role as the family Crypt Keeper…
Is she up for the task? Only time will tell.
Links –
Amazon US – http://amzn.to/1Jz9JpS
Amazon UK – http://amzn.to/1gci9Hi
Barnes & Noble – http://bit.ly/1zPHQEs
iBooks – http://apple.co/1FUabHI
Nook UK – http://bit.ly/1v7LiIZ
Kobo – http://bit.ly/1T80GOz
Smashwords – http://bit.ly/ZAylcE 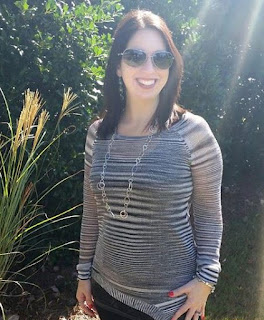 K.A. Young writes fantasy. Dark, edgy and sexy fantasy books with a strong female lead for adults and exciting adventurous fantasy books for teens. KA is a non-conformist with a coffee and dark chocolate addiction. She loves the ocean, the sun, traveling, reading and spending time with her kids and hubby.
Note from K.A. Young
If you enjoyed one of my books, I would be beyond grateful if you would take a moment to post a review somewhere online to help other readers discover it. There isn’t a right or wrong way to write a review, it can be as long or short as you like.
Thanks for reading, Kate
Other FREE READS from K.A. Young

Prophecy of The Female Warrior

Anna Wilkins is a prototypical housewife. She buys groceries, picks up the dry cleaning and host dinner parties.
Everything was picture perfect from the outside looking in until the life she was born to live collided with the life she was living. Her husband is murdered by a creature from another realm, a creature that is only visible to her. Through her pain, his death awakens a part of her she didn’t know existed. She is then thrust into a life of Vampires, Werewolves and Sexy Nephilim Warriors.
Drawn to her by a bond as old as their race, a Nephilim Warrior finds Anna at her darkest hour and seeks to arouse what lies dormant within her. The scorching sexual attraction she and the Warrior feel for one another may be beyond anything either of them can control…
Links –
Amazon US – http://amzn.to/1FUsj4f
Amazon UK – http://amzn.to/1T82PtA
Barnes & Noble – http://bit.ly/1H2Vg1U
iBooks – http://apple.co/1IQKPwd
Nook UK – http://bit.ly/1CcSlVt
Kobo – https://store.kobobooks.com/en-us/ebook/prophecy-of-the-female-warrior
Smashwords – http://bit.ly/1RTwYu5

Elise Michaels’ motto has always been: no guts, no glory. She is a thrill seeker, continually craving excitement and adventure. The idea of being tied down to a place or man never interested her, even though a betrothal spell was cast linking her and the Head of Council’s son when they were mere infants.
Being a distant third in succession to assume the Head Mistress role, she felt confidant that her secret would remain in her past along with Coven life. Unfortunately, nothing in our fun loving heroine’s future is anything she or anyone from the supernatural realm is prepared for.
Now, she’s forced to return to the place and the Sorcerer she so desperately sought to forget.
Elise has no idea the power and gifts that await her. Can she let go of her own desires and embrace her new role? Or will she surrender to the faceless evil coming for them all?
Book one in the tantalizing Elise Michaels Series a spinoff of The Nephilim Warrior Series.
Links –
Amazon US – http://amzn.to/1GPWcnO
Amazon UK – http://amzn.to/1CcDHxJ
Barnes & Noble – http://bit.ly/1C1C3yp
iBooks – http://apple.co/1CcDOt3
Nook UK – http://bit.ly/1KuBb8n
Smashwords – http://bit.ly/1IQBm8i

*14+ Young Adult* You know those times when you’ve just had a fight with your mom and behind closed doors you say horrible things like I hate you or I wish you were dead? Well, it really happened. Mom is dead, gone forever they all are; every single person in our entire town disappeared overnight, like some freaking nightmare. I’m Kylie Daniels and my brother and I are the only ones left and now we have to figure out how to survive… When sixteen-year-old Kylie Daniels wakes one morning to the sound of her kid brother hysterically screaming, she soon discovers that life as she knew it, had changed forever… Follow Kylie and her brother Mason as they discover that the veil that separated the human realm from that of the supernatural was compromised exposing them to shifters, slashers, demons and Valkyrie.
Links –
Amazon US – http://tinyurl.com/US-Amazon-Awakening
Amazon UK – http://tinyurl.com/UK-Amazon-Awakening
Barnes & Noble – http://tinyurl.com/Nook-US-Awakening
Nook UK – http://tinyurl.com/Nook-UK-Awakening
iBooks – http://tinyurl.com/iBooks-Awakening