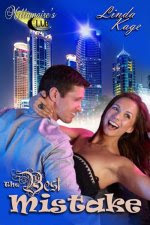 Her biggest mistake might be the best thing ever to happen to him.

Deri “The Mistake” Crandall wants nothing more than the love and acceptance from a family. After her mother dies, she finally discovers who her father is—except he and his family aren’t exactly everything she’s dreamed of. Not about to let a little thing like that bother her, she strives her hardest to fit in. Though honest to a fault, she even lies to gain their affection. But who could have predicted the one man with whom she immediately clicks is the very millionaire her grandfather orders her to betray?

Cole Harrety’s life is all about work and ignoring play, until a petite, curvy bundle of quirky woman literally tumbles into his lap. From the moment he loses a staring contest with her, he knows Deri is exactly what’s been missing from his mundane life and no other woman will ever compete with her.
With a web of deception already woven, can their new bond survive a shattered trust?

His chocolate-brown eyes filled with sympathy as he lightly stroked her hair. “We’ve almost got you free. Just hang in there.”

A moment later, some unknown person yanked the ladder away. The release of pressure was almost more brutal than the pinching agony, but it soon dissipated to a dull throb.

“I’m going to check your ankle out, okay?” Large, capable fingers slipped off her shoe.

She ground her teeth and swallowed yet another whimper.

“Sorry,” he rasped. He gently cupped her heel as he examined the damage, prodding with the barest of pressure from his thumb.

When she heard, “Holy mother of God,” her eyes flew open, and she lifted her face.

Hot Guy shifted to block her view from the damage. “Don’t look.”

“Well, it’s…it’s swelling and bruising already. We need to get you to a hospital. Now.”
She nodded. “Okay.” But how was she supposed to walk out of here? Gah, even the thought of standing made her stomach pitch with nausea.

“Wrap your arms around my neck,” he answered her unspoken question. “I’ll carry you.”

The sheer, noble romance of his command caused Deri to lose her breath.

What? Run away with you and bear your twenty children?

Sure. As long as he kept looking at her exactly as he was now, she was pretty much game for any suggestion he made.

She stared deeply into his brown eyes and nodded. “Okay.”

This book had me from the first page.  There is humor, romance, miscommunication between Deri and Cole.  The difference with The Best Mistake is that there was a twist in the end that I didn’t see coming and Ms. Kage’s voice is fresh and inviting.

Deri is the “mistake” in her family.  Everyone in her family thinks that she is a failure and she has believed that for so long that she actually believes it.  She doesn’t strive to really better herself and when confronted with a task from her grandfather, she jumps at the chance to prove herself to her family.  I really felt for Deri because she really is a great person but she has been beat down so much by her family that the self doubt had taken over.  When she falls and twists her ankle she never realized what fate would bring her.

Cole is your basic workaholic that leaves little time for play.  When he sees Deri trip and fall literally in his lap, his life is changed forever.  As he and Deri get close, he doesn’t understand why is suddenly quits the company and refuses to see him.  She is his perfect woman and knows it.  With some time and romance, they might have a chance.  What Cole didn’t see coming was that the tangled web that Deri was in would ultimately be his and Deri’s test of the trust with one another.

I have never laughed so much in a book in a very long time.  The excerpt is just a teaser for the rest of the scene.  Trust me, you will have tears streaming down your face.  Ms. Kage writes with a sense of humor that is true to the characters that she has created.  Deri doesn’t mean to be funny but with her self doubt, wanting to be part of her family that she was denied and her time with Cole, you really can’t help but laugh and feel for her.  Cole is a dream but I honestly had my doubts towards the end.

Ms. Kage has written a great story about two people that meet under the funniest circumstances but ultimately realize what is important in their lives and find the strength within themselves to reach for their own happiness.

3 thoughts on “The Best Mistake-review”