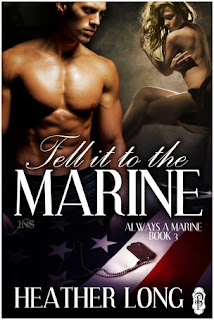 Title: Tell It To the Marine (Always a Marine, Book 3)
Author: Heather Long
Publisher: Decadent Publishing (1NS)
Length: 12,000 words
Genre(s): Contemporary Erotic Military Romance
Available at:
Decadent Publishing | Amazon| BookStrand
Blurb:
PFC James Westwood wasn’t a typical Marine. A clinical psychologist who devotes time to his brothers by working at Mike’s Place, James recognizes that his band of brothers need a helping hand on their journey home.  When Captain Dexter encouraged everyone to sign up for the 1Night Stand dating service, Westwood committed himself, what did he have to lose?
The last thing he expected was screen goddess Lauren Kincaid.
Movie star Lauren Kincaid grew up splitting her time between the cold reality of the Hollywood scene and her family home in Plano, Texas   After two decades of artificial friendships and inflated egos, her greatest desire is to meet a real man, not a Hollywood talking head.  Her agent suggested the 1Night Stand service for its discretion and exclusivity. When she arranged to meet her date at Dallas’ famed Sybarite Club, she wasn’t sure what she was expecting, but the gorgeous psychologist with rapier wit blew her expectations away.
Everyone needs someone to hear them.
James and Lauren share an unmistakable connection, but when one of James’ patients suffers a crisis, Lauren more than proves her mettle.  Can one night turn into happily ever after for this Marine and his movie star?
Excerpt:
“Your party is this way, sir.” She beckoned him down the red-carpeted steps into the lounge proper and he followed her path through the club to a booth in the back. Acclimating to the low lighting, he saw a slender feminine arm extend from the right side of the booth until a red-nailed hand cradled a wine glass.

A curl of excitement twisted in his gut. He’d planned to keep this low key, but the club, the music and the atmosphere teased his anticipation. The waitress halted with a sweep of her arm to allow him to precede her.

“Can I get you anything, Mr. Westwood?”

“Soda water with lime, please.” He preferred to keep his wits about him. “And bottle of whatever the lady is having.” If they were going to have a dinner, the least he could do was provide her with her preferred wine.

“Of course.”
Free of the waitress’ distraction he turned back to the booth. His fingertips rested against the table as the golden-haired goddess looked up at him. Sea-blue eyes seemed to catch every drop of light in the room and reflect it in shimmering azure as she rose to offer him her hand.
“James?” Milk and honey flowed through her voice and his spine straightened, his cock already jerking into a salute. “I’m…”
“Lauren Kincaid.” He could only hope he wasn’t drooling like a lovesick fool. Lauren Kincaid, a goddess of the silver screen, was his one night stand?
Her laughter, low and throaty, dragged his open mouth into a smile. Shaking off his shock, he took her extended hand and shook it carefully. Her slender fingers seemed totally engulfed by his and he didn’t want to squeeze her with excitement.
“It’s a pleasure to meet you.”
“Ma’am, you have no idea.” His date was Lauren Kincaid. The only chick flick star he would pay money to see with or without a date.
Review:
The third installment of Heather Long’s Always a Marine series follows PFC James Westwood, Marine turned clinical psychologist so he can help out his fellow Marines acclimate to civilian life. With his whole unit signing up for the 1Night Stand service and it turning out so well for his fellow Marines, he has nothing to lose and everything to gain. Movie Star Laura Kincaid is sick of the artificial men she keeps meeting in Hollywood so she allows her agent to sign her up for 1Night Stand where she is paired up with James, who just happens to be her biggest fan.  Lauren falls in love with the way he cares for his patient and fellow Marine, and he falls in love with her compassion and ability to empathize with the plight of Marines struggling to reenter civilian life.
The thing I love about the way Ms. Long tackles these Novellas is that she doesn’t just cram in hot mindless sex. There is lots of hot steamy sex but she builds the story and lets us fall in love with the characters in just a short span of time. I feel like that takes a mastery that not a lot of other authors possess, and is what keeps me coming back to this series. James and Lauren aren’t fully committed after one night but they are well on their way to a happily ever after, and it’s believable.  My biggest complaint is that story is too short, but that isn’t a bad thing because it’s handled beautifully, I just want more because I’m greedy and the story is that good.

Heather Long lives in Texas with her family and their menagerie of animals. As a child, Heather skipped picture books and enjoyed the Harlequin romance novels by Penny Jordan and Nora Roberts that her grandmother read to her. Heather believes that laughter is as important to life as breathing and that the Easter Bunny, the Tooth Fairy and Santa Claus are very real. In the meanwhile, she is hard at work on her next novel.
http://www.heatherlong.net
Http://www.facebook.com/HeatherLongAuthor
http://www.twitter.com/HVLong

20 thoughts on “Tell It To the Marine (Always a Marine, Book 3)-Review & Giveway”