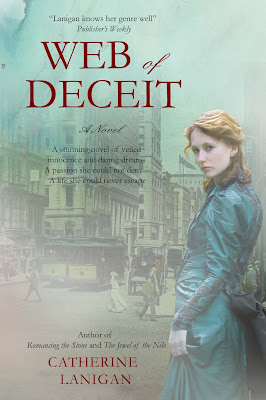 From the depths of a London slum, Amanda Granger created an illusion of wealth and breeding that became her passport into New York society. With her dazzling beauty and the ease with which she lived her lie, Amanda captivated an adoring public and drove men to bold and dangerous passions.

But for all her fierce ambition, all her daring dreams, Amanda Granger knew that her heart’s desires were held together by the fragile threads of deception and secrets. Triumph would always be elusive until she escaped from her web of deceit.

Catherine Lanigan is the international bestselling and award-winning author of forty published titles in both fiction and non-fiction, including the novelizations of Romancing the Stone and The Jewel of the Nile, as well as over half a dozen anthologies, including “Chicken Soup for the Soul: Living your Dream”, “Chicken Soup for the Writer’s Soul”, and more. Ms. Lanigan’s novels have been translated into dozens of languages including German, French, Italian, Spanish, Russian, Portuguese, Chinese, and Japanese. Ms. Lanigan’s novels are also available in E-books on Amazon.com and Barnes and Noble.com, Apple Store, Mobi and Kobo. Several of her titles have been chosen for The Literary Guild and Doubleday Book Clubs. Her Vietnam war-based novel, The Christmas Star, won the Gold Medal Award Top Pick from Romantic Times Magazine and has also won Book of the Year Romance Gold Award from ForeWord Magazine as well as Book of the Year Romance from Reader’s Preference.

Lanigan is the author of a trilogy of non- fiction books regarding angelic intervention in human life: Angel Watch, Divine Nudges and Angel Tales published by HCI and Cedar Fort.

Lanigan was tasked by the NotMYkid Foundation to write a non-fiction book addressing teen addictions. Ms. Lanigan’s first Young Adult adventure novel, The Adventures of Lillie and Zane: The Golden Flute, was published by Cedar Fort.

Currently, she has published six novels in the Shores of Indian Lake series for Harlequin Heartwarming: Love Shadows, Heart’s Desire, A Fine Year for Love, Katia’s Promise and Fear of Falling. Sophie’s Path pubs July, 2016. She has recently contracted for three more in the series: Danger Zone, Wedding for Isabelle and A Bride for Mica.

As a cancer survivor, Ms. Lanigan is a frequent speaker at literary functions and book conventions as well as inspiring audiences with her real stories of angelic intervention from her Angel Tales series of books. She is an outspoken advocate for domestic violence and abuse and was honored by The National Domestic Violence Hotline in Washington, D.C. (THE EVOLVING WOMAN). She has been a guest on numerous radio programs including “Coast to Coast” and on television interview and talk show programs as well as blogs, podcasts and online radio interview programs.

4 thoughts on “Spotlight of Web of Deceit by Catherine Lanigan w/a rafflecopter giveaway!”