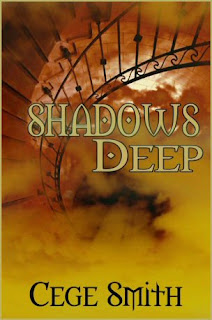 I would like to welcome Cege Smith with her new release of Shadows Deep.  The blurb and excerpt are below.  Enjoy….
Title: Shadows Deep (Shadows, Part II)
Author: Cege Smith
Publisher: Self
Length: 70,000 words
Genres: Horror, Paranormal (Non-Romance)

Peeking Out From Beneath the Blindfold
I grew up a bit of a goody two shoes. I went to Catholic school. I was a dutiful student in school. I was responsible, did my chores, and was generally respectful to my parents. I broke up with a boy in seventh grade because he wanted to kiss me. (What a cad!)
Okay, I confess, I’m still a bit of a goody two shoes. Which means that I like all things, including my romance reads, more on the traditional side.
I love a HEA (happily ever after) as much as the next gal and that’s what I go looking for when I read a book in that genre. But I have gotten older and my romance has gotten more mature, I frequently find myself squirming in my seat when the action gets a little bit…intense. I lean toward stories where the author gives you free rein to envision what’s happening in your mind without all the details. That point of view ensures the story is comfortable and sweet, and doesn’t push me outside my goody two shoes boundaries.
When I released the first book in my Shadows series, The Edge of Shadows, I called it a paranormal romance. It’s got the paranormal elements in spades, no doubt about it. But I struggled a bit with the romance label because although I have a strong romance subplot between Ellie and David, that isn’t the main focus of the book. Their bond happens fast and with everything else going on in the story, they don’t even have a chance to take their relationship to that next level.
Add into that, I write like I read: my romance is sweet and subtle. But it was an area that I wanted to delve into further with the sequel, Shadows Deep. Given that these aren’t YA books, I think that readers expect at least a little spice to stir up the romance. So I pushed myself outside my comfort zone.
Even though I’m a writer, I always consider myself a reader first. The best way to figure out how to go about doing something is to do some research. I found a free book one day by Selena Kitt and the cover showed this was clearly a book that I don’t normally read.  Just browsing the excerpt had my cheeks blazing, but I was intrigued. I took the plunge and downloaded the book.
Well, I can easily say is that in the name of research, that book really opened my eyes. What I appreciated most about that short little story was that it wasn’t all sex either; Kitt took time to do some character development as well. I read this book right before the 50 Shades of Grey phenomenon really took over, and if nothing else that confirmed for me that readers are looking for books that will push those boundaries.
So I decided to dip a toe into those sultry waters with Shadows Deep and included one scene where Ellie and David get a little hot and heavy. It’s doesn’t go beyond a major makeout (they get interrupted) but it was a big deal for me. I squirmed the entire time I wrote it even though no clothes even came off. At the same time, it was empowering and I have to admit that I enjoyed it.
While I still don’t intend for the romance in my books to become the main focus of the story, I do see value in giving readers a clearer taste of what’s going on in these smoldering scenes. I don’t want them to feel like they have to work for it. A little spice makes it nice, and who knows, maybe someday I’ll take both the goody two shoes and the blindfold completely off.

Ellie Coulter made a deal with the devil, and now it’s time to pay the price. Little did she know, the shadows that have swirled around her life since her parents’ death were not a coincidence. As Ellie’s destiny is revealed, it comes with the knowledge that her fate is the lynchpin in a far larger, and more dangerous game. And the one who found her has no intention of ever letting her go.

Ellie walks a fine line between keeping up the appearance of acceptance while gathering the information she needs to escape. Along the way, she has to decide who to trust and that includes the man she loves.  As facts give way to lies, Ellie begins to question everything.

With her true intentions on the verge of being discovered, Ellie must find a way to defeat her captor before she becomes a shadow herself.
Excerpt:
Letting go was one of the hardest things a person could ever do. Ellie knew that. What happened when she let go of the idea that reality as she knew it was merely a cover on a rabbit hole? She had willingly taken the cover off and fallen down into the unknown darkness. She’d surrendered. Somehow it felt easier that way. But the Voice kept picking at her even though she was deep in her hidey hole. It wouldn’t leave her alone.
“What was it like for you when your parents died?”
Ellie had answered some variation of that question what seemed like a million times over the years, but her response always paled in comparison to the effect of that one event on the rest of her life. How could she explain the depth of pain she felt when the two people who she loved most were ripped out of her life? Or the excruciating, almost debilitating sense of loneliness that followed when she finally comprehended that she was completely alone in the world?

“I was eight,” Ellie replied. “I had no other family. One minute I was surrounded by love. In the blink of an eye I was an orphan. What do you think it was like?” No one could understand what she had been through, and eventually she gave up trying to explain. Her parents’ death was just something that happened to her a long time ago. Ellie preferred to leave that buried there.

“I am sure it was difficult. But you obviously learned to cope, even thrive.”

“Thrive isn’t the word I’d choose,” Ellie said. “I learned how to survive. Eventually I learned ways to be happy again, but I did that on my own. I never felt like I belonged anywhere again.”

The Voice was silent for a while and Ellie was relieved. When it wasn’t poking at her, the darkness was peaceful. Ellie was used to being alone.

“Tell me about your ability. You’ve linked that to your parents’ death.”

Ellie was tired of the questions. They had covered the same ground over and over again. But it was like the Voice was missing some nuance, and so it all started again. Combing through her life. Looking for clues. “I noticed it the first time at the funeral. I was standing there in the cemetery, looking at their caskets, with the social worker beside me. I kept looking around for more people, but it was just the three of us: me, the social worker, and the minister. And then I noticed that the longer the minister spoke, the more these colors seemed to grow out of him. It didn’t make any sense at the time. The colors were deep purple and blue and they got more vivid every time he made eye contact with me. It scared the hell out of me. I didn’t know what to do.”

A familiar cloud of sadness fell over her thoughts as she remembered that lost little girl. “When the service was over, I wanted to kick and scream and lash out. I wanted to push over those caskets because I convinced myself they were empty and it was some elaborate hoax. Any minute they would appear to take me home. But it wasn’t a hoax. My parents raised me to think that showing emotion in public wasn’t ladylike, so as desperately as I wanted to throw a tantrum, I knew they wouldn’t approve. I looked at the social worker and she had a glow of white tinged with yellow around her. Even though I didn’t know what it meant, the colors were soothing. I had to accept that I was left with nothing but this woman to take care of me. I was naive and automatically assumed that she was kind and that she’d be good to me.”
“She wasn’t?”
Ellie sighed. “After twenty-five years of reading auras, I know now that she was indifferent. She probably saw a dozen kids just like me every week. Her aura meant that she was at peace and even slightly happy, but it had nothing to do with me. I was part of her job, and while I was watching my parents be buried, she was probably thinking about getting a manicure or going home and having a glass of wine. Me, I had no home left.”

“You went into foster care.”

“Yes, and in foster care I stayed until I applied for emancipation when I was sixteen.” She remembered the day that the court approved her request. It had been bittersweet.

“Your ability must have been advantageous in that kind of hostile environment.”

“If you mean it helped keep me out of trouble, then probably it did. But I was always a good kid. I studied hard, got decent grades, and generally stayed out of everyone’s way.  I never gave my foster families any reason to really concern themselves with me. I wanted to be invisible. I was pretty good at it,” Ellie said. She had closed herself off from anyone who tried to reach her. It was a defense mechanism that worked well. Perhaps too well.
“Until you met Veronica.”

A face flashed in Ellie’s mind. A pretty blond with infectious laughter. Whereas her parents’ faces had faded over time, Roni’s was vivid and seemed so real that Ellie almost thought her friend was there with her in the darkness.

“Roni just wouldn’t take no for an answer,” Ellie said. “She saw something in me that I didn’t see in myself. And for some reason she wanted to be my friend. I owe her a lot.” It was strange talking about Veronica. Those memories were under strict lock and key for a reason. 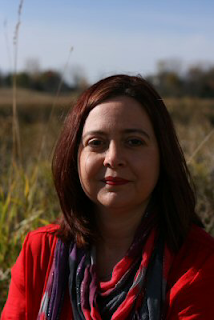 About the Author:
Cege Smith is a Minnesota based writer who is addicted to lattes and B-rated horror films. She had been crafting spooky stories since she was twelve years old. She lives with her husband, two adorable stepsons, and mini long-hair dachshund, Juliet in the suburbs of Minneapolis.
Blog: http://www.cegesmith.com
Facebook: http://www.facebook.com/cegesmith
Twitter: https://www.twitter.com/cegesmith