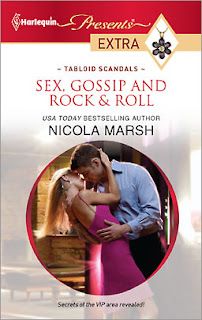 In all her time as premier tour manager to Australia’s stars, Charli Chambers hasnever had someone as infuriating—or delectable!—as successful businessman Luca Petrelli along for the ride. He might always be in the gossip columns, but there’s no way she’s letting him claim VIP status!But Luca’s wicked eyes are just too tempting. In spite of herself, Charli’s soon attending after-parties—just for two. She wants to believe this is one duet that’s about to go platinum, but in spite of Luca being unprintably good in bed, can she ever get close enough to the real Luca for their fling to be more than just a one-hit wonder?

I know, I know. Most people are already exiting the review because its a Harlequin book and that’s rather sad. As most people know, I love my Harlie’s and promote, talk about and holler has loud as I can about them. I chose to read a Presents Extra for a number of reasons. The first reason is that I haven’t read one in over a year and secondly, I love Nicola Marsh’s Harlequin Romances. I was not disappointed in picking this one up.

Charli is a complicated character as first. She is a tour manager for the premier record label in Australia. She was literally thrown out of her house at an early age and was picked up by Hector, the label founder; she was mentored, nurtured and grew with his help. The one thing that she really never experienced was love. Luca was Hector’s grandson and was never accepted as a member of the family based on his father’s never acceptance of him. When Hector needed Luca to tag along with Charli as the finance manager on Storm Varth’s (the name is awesome) comeback tour, Luca and Charli didn’t expect to fall in love.

Ms. Marsh has created two lovable and likeable characters. Charli hides behind her job and her snarky attitude. Afraid to trust herself and her feelings for Luca. Luca, on the other hand, never experienced what it was like to be truly loved and accepted. What started off as flirting and strong innuendo between Charli and Luca ended with hurt feelings and hearts broken.

While this is a Harlequin Presents Extra, the bedrooms scenes are tasteful, loving, hot but not graphic. You could lend this book to your mother or grandmother and not be embarrassed. They are emotional and thought provoking. My heart broke for both of them at one time and I really worried about them.

The dialogue is crisp, clean and hilarious. The secondary characters are supporting and not intrusive. I highly recommend Sex, Gossip and Rock & Roll for anyone that wants an emotional satisfying read with hilarious flirting and a sigh worthy ending.

13 thoughts on “Sex, Gossip and Rock & Roll by Nicola Marsh”