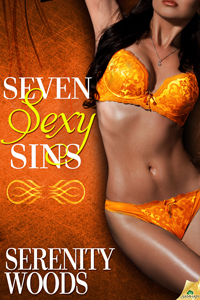 Oooo, Serenity is here describing Avarice and there is an excerpt at the end.  There is a daily prize, winner’s choice, one of Serenity’s backlist or $5 amazon gift card.  Please leave a comment and email.  No email, no prize.  Also, there is a grand prize of a $20 Amazon Gift Card, so don’t forget to fill out the form at the end.

Sin Number Six – Avarice
Hi everyone! It’s wonderful to be here today to talk about my new book from Samhain Publishing.
Samhain have labelled this friends-to-lovers romance as a Red Hot, and that’s certainly relates to both the setting and the heat level! Set in the sub-tropical Northland of New Zealand during a hot and sultry summer, the  story follows the sexual journey of Faith Hillman, a journalist who decides to look around for a partner to help her explore the Seven Sexy Sins. These are based on the seven deadly sins, and relate to seven articles she’s been commissioned to write by a well-known women’s magazine about ways to experiment in the bedroom.

Her brother’s best mate, Rusty, doesn’t like the thought of her carrying out this research with a total stranger, so he offers his services. Of course he’s being completely noble and it has nothing to do with the fact that he’s fancied the pants off her for years! Faith’s excited to think Rusty wants to go to bed with her and accepts his offer, although she does ask him to sign a contract stating their relationship is for the seven sins only. Of course this doesn’t stop her falling for him, and soon she has to figure out a way to prove to Rusty that he is worthy of love, and the family devil that has plagued his father, brother and grandfather hasn’t been transferred to him.

Faith’s sixth sin is Avarice. What better way of illustrating this, she thinks, than greed for orgasms? She and Rusty go away to a beach house on the west coast for a day and a night, and determine to find out how many times a couple can actually do it and still walk the next day. What’s their final score? You’ll have to read the book to find out 🙂 But by the time they finally decide enough is enough, things have turned dark, and it’s becoming clear they’re not going to be able to walk away easily when the seventh sin is done.

Here’s a clip from the beginning of the scene, when they first arrived at the beach house and decide they may as well get started.

They arrived around eleven and found the house easily. It sat just off the beach on a bank of grass, with a large living room that overlooked the sea. The water was a sparkling turquoise, topped with white surf, the sand a shimmering gold.

“Oh.” She sighed as Rusty opened the sliding doors and let the warm March air into the house. “It’s beautiful.”

He came up behind her and wrapped her in his arms. “It’s nearly a full moon tonight,” he murmured in her ear. “I want to make love to you out here, and watch the moon turn your skin silver.”
She turned around to face him. “‘Make love’?” she said playfully. “When did we start ‘making love’?”

“Sure it is.” She reached up to kiss him, whispering, “And how many times do you think you can ‘make love’ in one day, hmm?”

“I don’t know.” He picked her up, making her squeal, and wrapped her legs around him. “But I think we should get started. I don’t want to run out of time.”

“God forbid.” She kissed him, and he carried her back into the house, up to the kitchen, and lifted her onto the worktop.

“Pre-sex sex?” She tightened her legs around him, pressing his now-very-obvious erection to her.

“Just a warm-up.” He slid his hands under her top, up her ribcage and cupped her breasts.

“So this doesn’t count then.” She arched her back as he slipped his hand inside her bra and rolled her nipple.

“Well, I didn’t say that. I still think it should count toward our golden total.” He stroked her and kissed her until she began to squirm against his fingers. He put his hand up her skirt and pushed aside her panties, and within seconds he was inside her.

She tipped her head back as he pulled her to the edge of the worktop and slid right into her. “Oh…” She looked back at him, her gaze unfocussed. “So what’s your guesstimate, then?”

“For what?” He seemed to be having trouble concentrating.

“How many orgasms can a man have in one day?”

“I’m aiming for half a dozen,” he said as he began to move inside her, “but I expect you to top that.”
“Ooh.” She shivered at the sensual slide of his skin on hers. “Six-plus orgasms? Oh God, is this just the perfect day or what?”

“You have no idea,” he mumbled, increasing his pace. “I can’t believe you made me wait all week.”

“All part of the contract.” Her breath came in gasps. “Jesus, Rusty. You’ve been inside me, like, ten seconds…”
“That’s…what comes…of making…us wait. Fuck.”

They came together, sighing and groaning in turn, and afterward he pulled her to him and wrapped his arms around her.

“One-all,” he said.
She started laughing. “You’re going to keep score?”
“Well, isn’t that the point?”
“I guess.”
And so they were off.
I’m talking about the other six sins on six other blogs  – check out Author’s Angels if you want to read more about them!
Serenity x

I will admit that I’m on the last three chapters of this book.  I know, bad host but with moving, not having internet…

Tease review and I post the rest tomorrow afternoon.  I love Serenity.  I have never read a book from an author that puts in the scene has much as she does.  I can smell the coast of New Zealand; the food that is being eaten; the touches/kisses/sighs of Rusty and Faith.  I’m through Sin 5 now and I’ve learned a thing or two.  Okay, maybe at least a dozen things at this point.

Rusty and Faith are two of the most simple yet complicated characters that I have read this year.  Sexy, smart, best friends in the end.  Honest and Oh.My.Word the things that they are doing to each other.  Off the charts, smoking but loving and tender, too.

I will leave you with this thought…reading this book so far has reminded me about the deep friendship that I had with my husband before we started dating.  I wouldn’t trade that for the world.