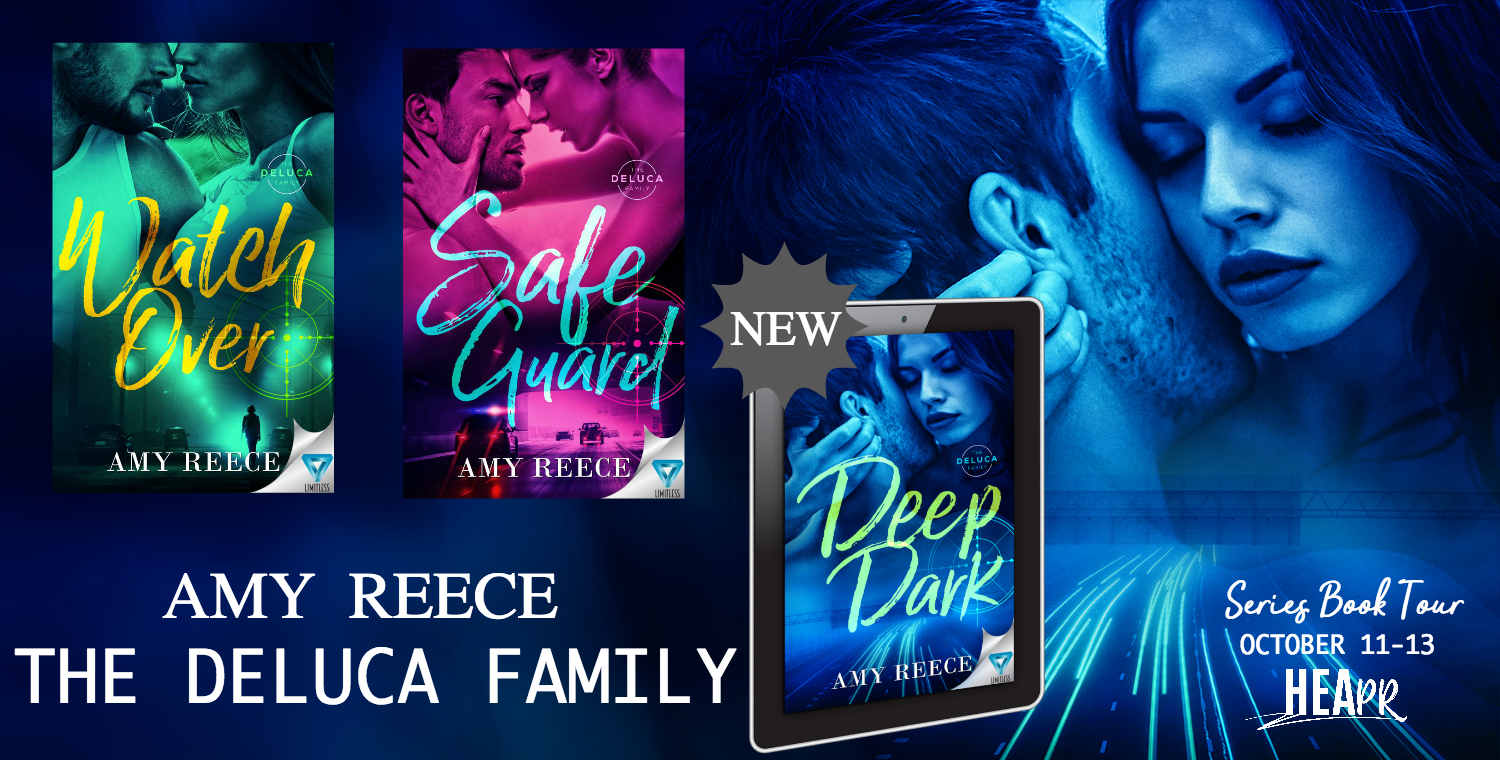 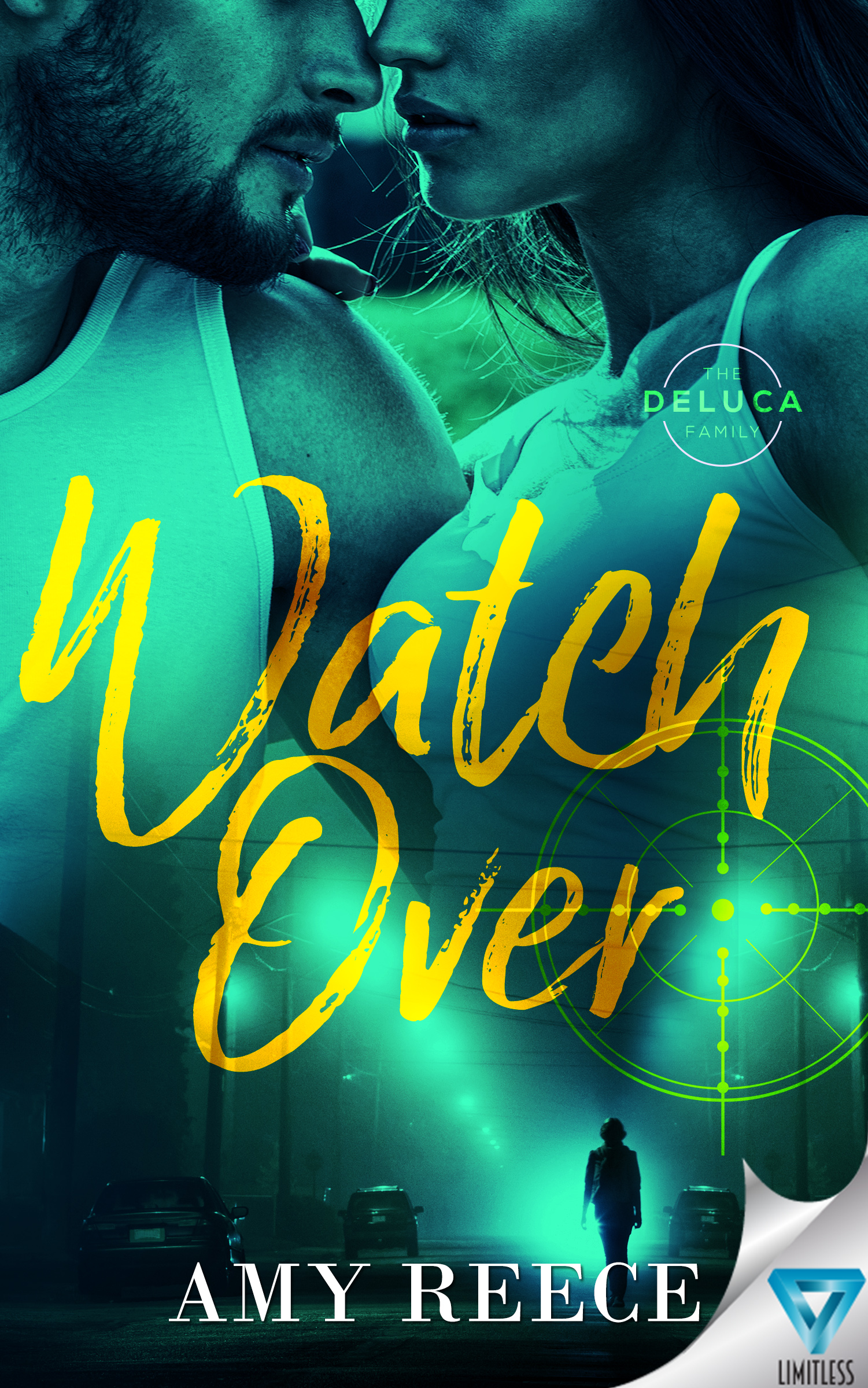 WATCH OVER by Amy Reece
The DeLuca Family #1

Melanie Blythe has a house, a career, and a cat. She doesn’t need a man.

But she isn’t the only one who’s noticed the gorgeous cop down the street. When her faithless cat prances home from the cop’s house with a note tucked in his collar, it might be the beginning of something beautiful…or it might be Melanie’s death warrant.

Detective Finn DeLuca is stuck at home recovering from a hit-and-run accident, and has plenty of time to wonder about the woman two doors down. There’s something mysterious about the beautiful brunette, and he’s determined to get to know her.

But someone else has other plans.

As the two grow closer, someone is watching—and waiting. Sooner or later, their chance will come.

And the two lovebirds will never see it coming. 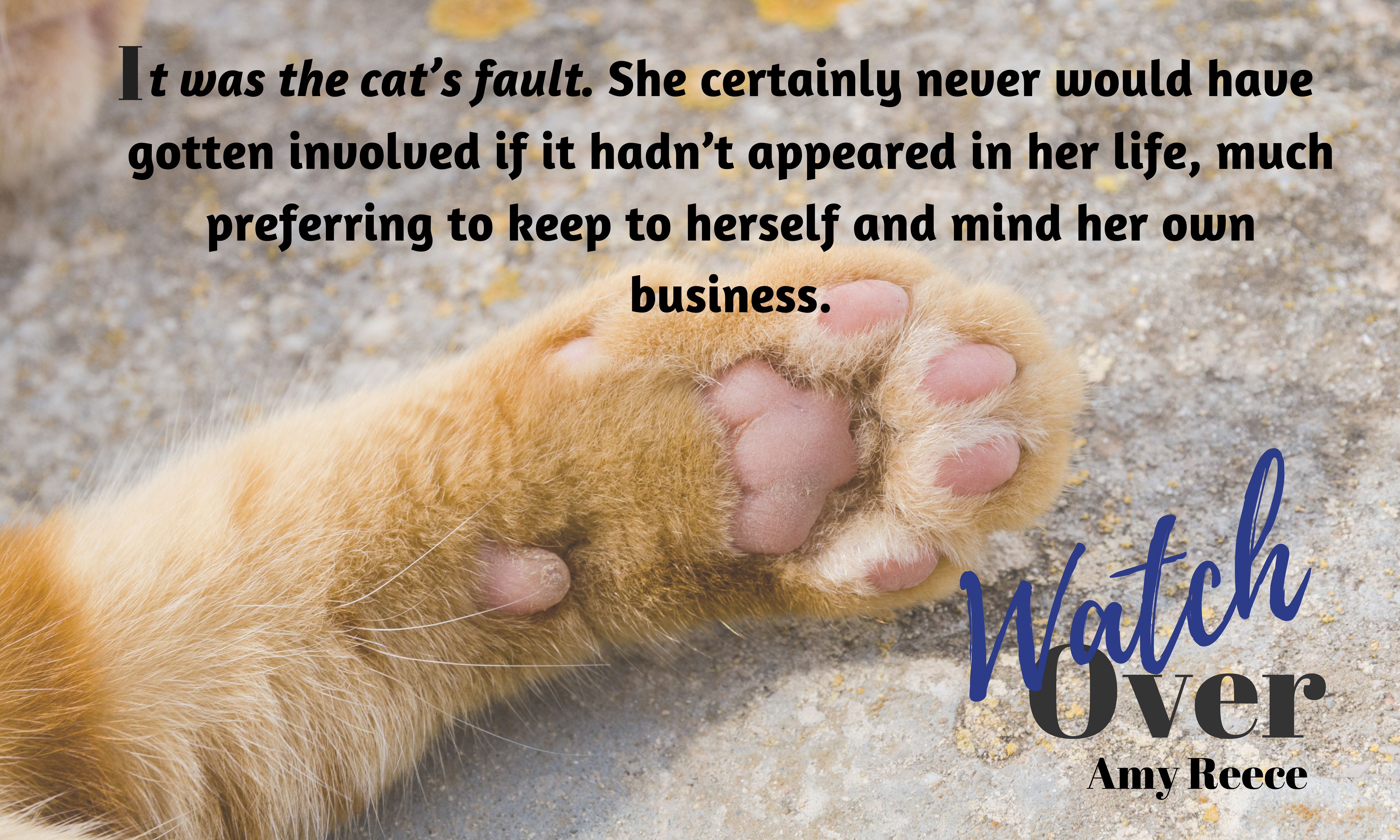 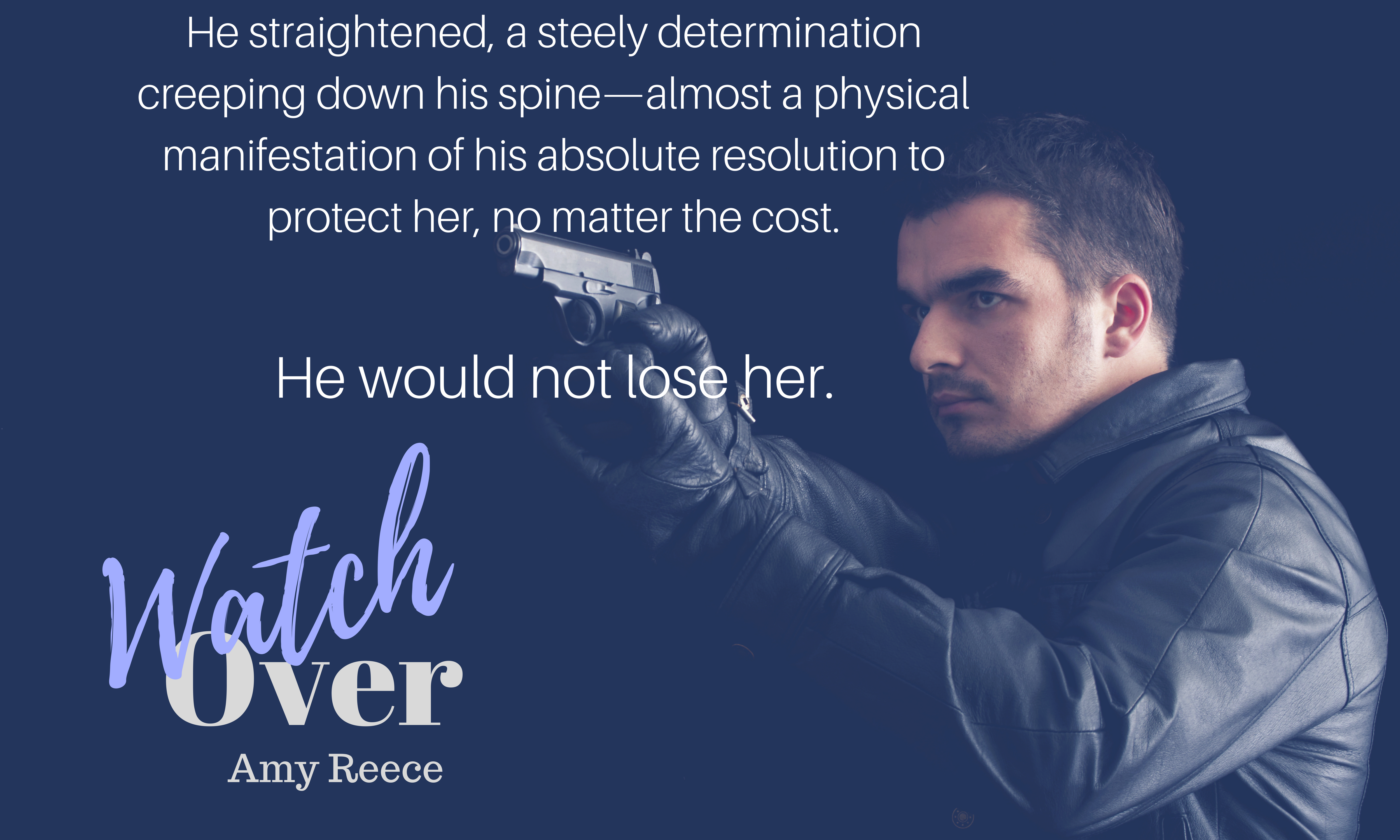 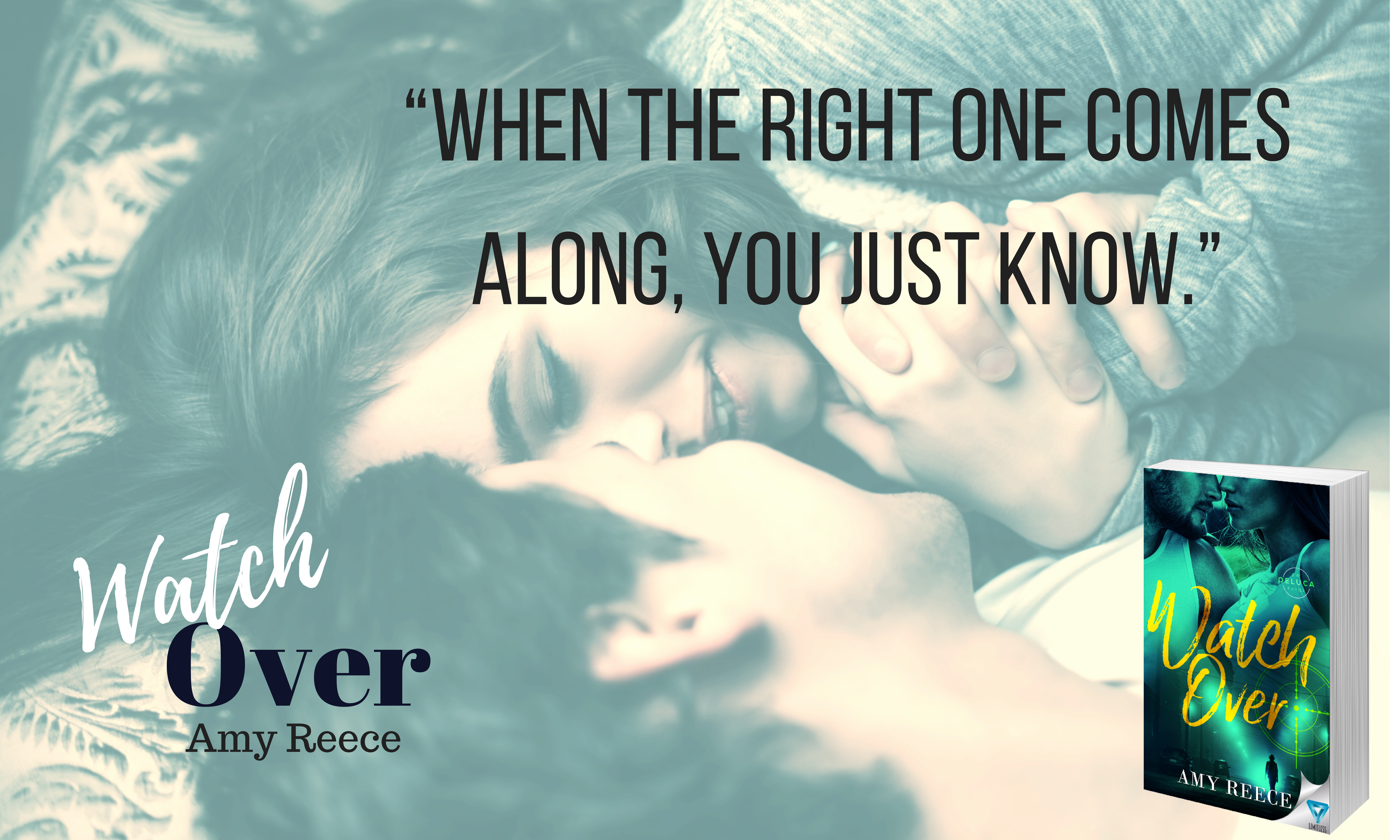 Of all the stories about the family, this one is the cutest.  CJ, the cat, is just too much in the book.  I loved, just loved the notes that passed between Finn and Mel in the beginning.  It’s how they kinda got to know each.  Plus, there is Fluff, the dog.
I really enjoyed watching their relationship blossom.  Mel has some issues to overcome like self-image, having a true relationship with a man, sexual feelings and then being overwhelmed by Finn’s family.  She’s never really lived up until she meets Finn.  Mel is the one person in the book that had the most character growth to achieve.  Ms. Reece wrote her beautifully in that sense.  You get to watch her get out of her shell and live a little.  Plus, it helps that Finn’s sister, Cara (LOVE HER, LOVE HER) is right there to help.
Finn is a dream.  He’s not as heavy-handed as Hugh but protects what’s his.  Mel is his and he won’t let anyone stand in his way.  I especially liked how we met him.  He’s had a string of bad luck but he is not one to dwell on it.  He picks himself up and works through it.  His relationship with his partner Chris is great, too.  His family is hilarious.  Loving, honest and funny but at times can be overwhelming to anyone, not just Mel.
I NEVER saw the suspense element coming.  When all is revealed, I was shocked.  I kinda had an idea but I just couldn’t figure out the “why”.  I love when an author does that to me.  Bravo, Ms. Reece.

Hugh DeLuca wants to settle down and start a family. But the only woman he wants—the one he can’t get out of his mind—doesn’t seem the family type.

She’s Christine Hart, a tough-as-nails police detective, and she happens to be investigating a mob murder at one of his construction sites.

As Chris’s feelings for him start to show, Hugh struggles to keep his distance. He’s afraid the savvy cop will break his heart, that she’ll choose her career over him—or worse yet, her deadly job will take her away forever.

Little does he know, he’s the one who will break her heart…and turn the murder investigation upside down. 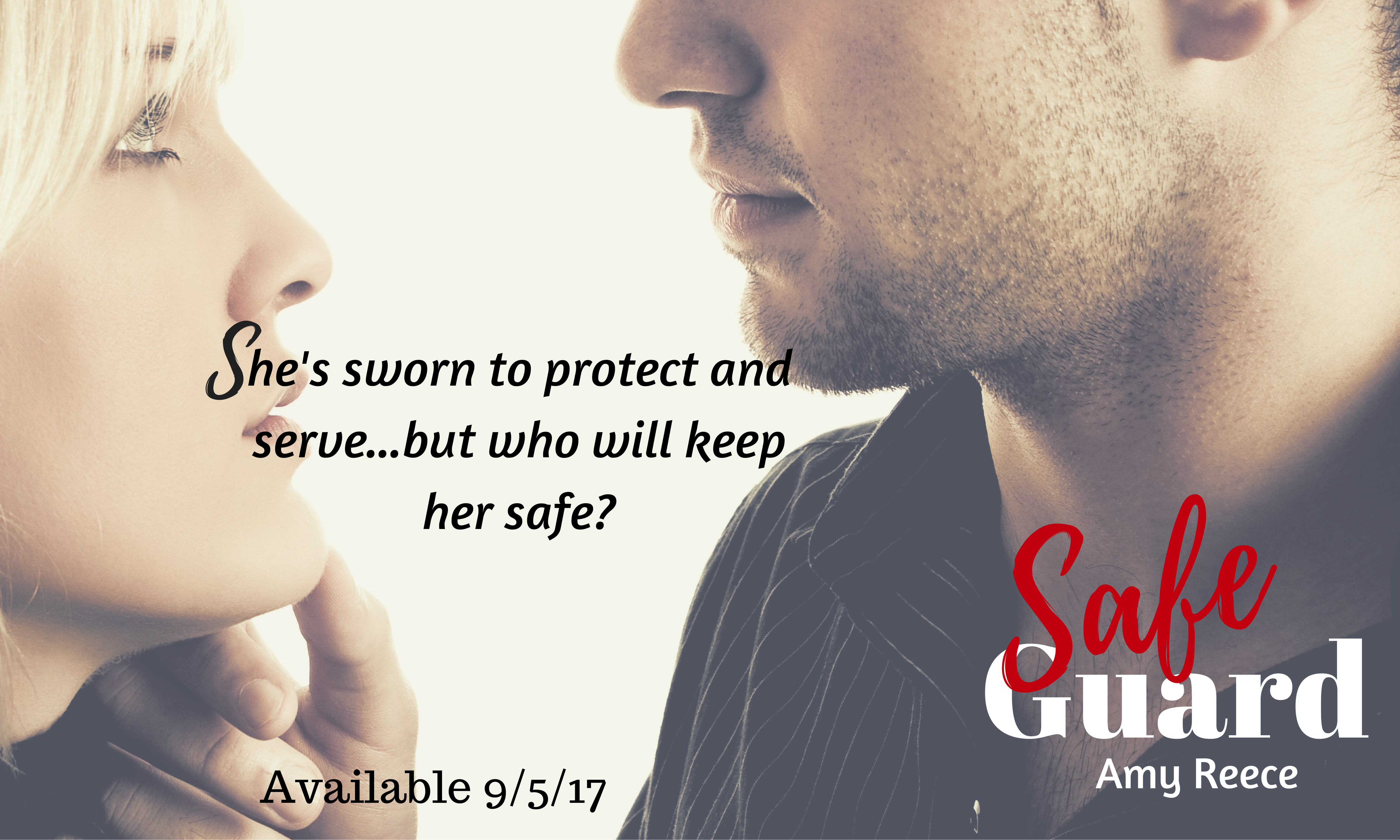 OH.MY.GOSH!  This book.  It has all the feels for me.  Strong heroine, strong hero.  Great plot and a bit sexier than the rest.  In fact, I will admit that Hugh and Chris are my favorite couple so far in the series.  Sure, sure, I liked the others but there is just something about this couple that had me from the get-go.  I liked the dancing around that they did in the beginning with the does she like me/does he like me.  I know, it sounds a bit junior highish but trust me, it’s great.
These two have met previously as Chris or Chrissy as Hugh calls her, is Finn’s partner.  I liked her in the first book and LOVED her in the second.  She’s strong, stubborn and will not take Hugh’s heavy-handedness or over protectiveness in stride.  She fights for her job and also her love for Hugh.  Sometimes, I just had to giggle when it came to her getting all copish on Hugh, too.  Another thing is how she gets along with the girls in the book.  There is a true friendship with Izzy, Cara, and Mel.
Hugh is just terrific in the book.  He loves Chris to distraction and he’s oldest sibling protectiveness gets in the way of their relationship.  But that makes Hugh who he is.  Once he finally figures out that Chris needs a partner in life, not a protector its perfection.  It takes him awhile but he finally gets there.  And let’s not forget that he uses his dog, Bob in his wooing of Chris.
The suspense element in the book is great, too.  We really get to see the partnership between Finn and Chris grow.  Plus, she’s just a bad**s!
Do yourself a favor and pick up this book.  You won’t be disappointed.

Isabelle DeLuca is capable of juggling her family obligations and her career as co-owner of DeLuca Construction. What she can’t do is reveal the huge secret hidden in her past—not even to her best friend or her own mother.

But when that mystery man suddenly appears again in the flesh, she’s forced to face the truth she’s tried so hard to hide.

Then, while looking into a lead on a business associate, she stumbles across something big—big enough to get Homeland Security involved—and soon finds herself embroiled in an investigation of possible domestic terrorism.

Who knew love—and bookkeeping—could be so hazardous? 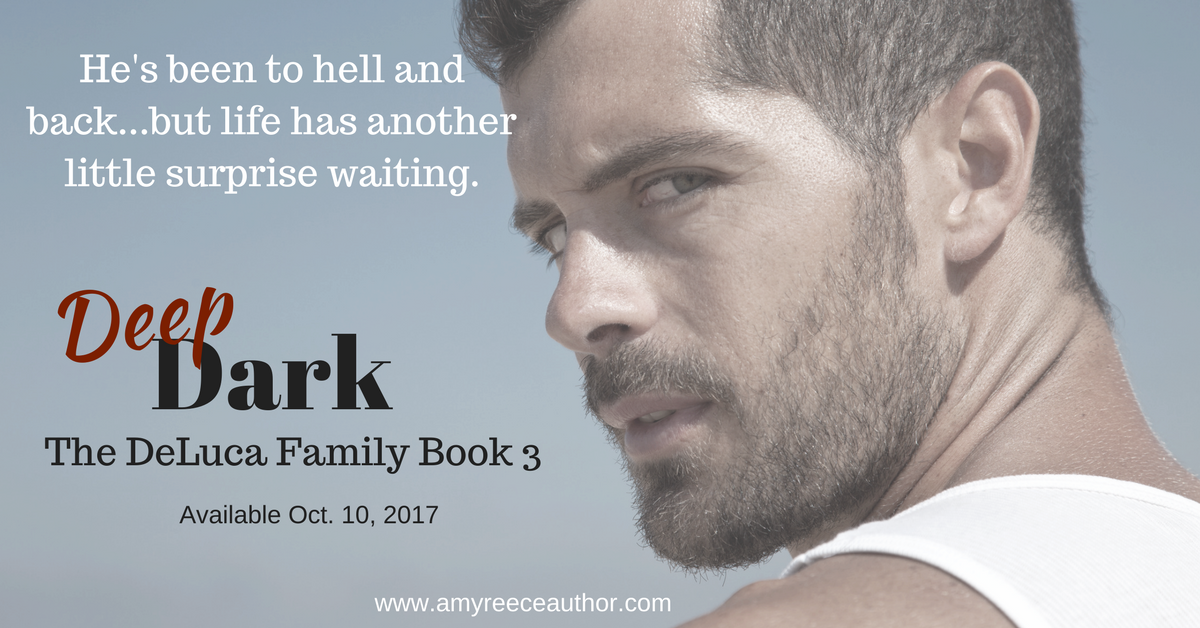 What a tangled web we weave.  I loved this story.  The thread about Janey’s paternity and Izzy’s reluctance to reveal who it was is great.  Mac is a guy to die for.  Really he is.  And Izzy?  I really felt for her in the end.  Such a strong woman and raising a child on her own.  How these two reconnected is awesome!!!!  I mean, in a mall of all places.   I would have freaked out but Izzy didn’t.  Oh no, not our Izzy.
Izzy is the sister that is a mystery up until this book.  I like how Ms. Reece kept her a bit of secret until now.  Izzy is subtle in the other books, but she is so much more here.  Her dynamic with Hugh in the business is at times humorous but also strong.  They play off each other perfectly.  Ms. Reece also does a great job with letting us know how Izzy feels about being a single mother.  It’s hard.  At times, frustrating but Izzy will do anything for Janey.
Mac just cracks me up at times.  The second chance at love trope here is perfection.  Ms. Reece does a very nice job of getting them together early but uses some real-life obstacles to get in their way of true happiness.  It’s real life.  Getting to know a person again.  Finding out you’re a father and balancing a new career while wooing the woman that you love.  Ms. Reece does an excellent job of weaving it all together.
The suspense element is great in the book.  You get Finn, Chris, and Mac working together and at times, it has its problems.  Finn isn’t too thrilled with Mac being in Janey and Izzy’s life and it spills over to the job at hand.  I get that and we see Chris getting them to play nice in the end.
I would be remiss not to mention the DeLuca family has a whole.  I LOVE this family.  Every last one of them.  If I had to pick, Cara is my favorite and we don’t even have her book yet.  She’s a teacher, strong, very opinionated but I sense a vulnerability there that I hope Ms. Reece explores.  She’s been burned before in love and I don’t think she has quite gotten over it.
Don’t miss this series.  I will be the first one to pre-order the next book when it comes out.  You should, too.

MEET THE AUTHOR:
Amy Reece lives in Albuquerque, NM, with her husband and family. She loves to read and travel and has an unhealthy addiction to dogs. She believes red wine and coffee are the elixirs of life and lead to great inspiration. She is the author of The Seeker Series (YA paranormal) and The Way to Her Heart (YA Romantic Suspense).