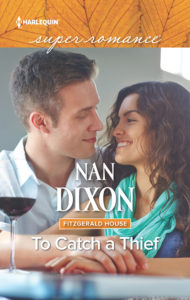 To Catch A Thief

What would you do for your family?

When Carolina Castillo’s once vivacious mother becomes ill, she gives up her singing dreams and comes home to Savannah. She’d do anything for her Mamá, even work at Fitzgerald House for the family she should have been part of. She’d even steal.

Carolina’s decisions make perfect sense until she comes up against the immovable rock that is gorgeous FBI agent Sage Cornell. The honorable cop sees the world in black-and-white. He would never understand the difficult choices she’s had to make, the secrets she’s been forced to keep close. And he could never love a woman like her. Or could he?

He boosted his butt onto the stool, moaning like he was Gramps after being in the saddle for a day.

Two women worked behind the counter drawing beers. He closed his eyes and took a couple of deep breaths.

The napkin slipped out of her fingers and floated to the floor.

“You got the job.” Did that make him feel better or worse since she hadn’t called?

“First day.” Her deep blue eyes had that stunned look, like a white-tailed deer caught in a four-wheeler’s lights at dusk.

“How’s your mother?” He schooled his voice, hoping she couldn’t catch his disappointment.

Her shoulders moved up and down with her sigh. His eyes dropped to her chest. Even in the modest polo, he didn’t need much imagination to remember how she’d pressed against him as they’d kissed.

So why in blazes hadn’t she called?

“They can’t get her seizures under control.” Her fingers crushed the second napkin she pulled for him. “She’s still in the hospital.”

“Thanks.” She stared into his eyes.

The noise of the room slipped away. He wanted to make the pain in her deep blue eyes disappear, too.

“I’ll have their seasonal.” He could have one beer and make it last through dinner.

“I’ll get that.” But she stayed right in front of him.

He smiled. Maybe she hadn’t been blowing him off. Warmth flooded through him.

Cripes. He let go and the warmth faded like a leaking balloon. He was an idiot. “Sorry.”

Over her shoulder, she quipped, “I didn’t mind.”

“Like I said, I’m available for dinner or just a shoulder to cry on.” Preferably in bed, but even he wasn’t crass enough to suggest that to her. He wanted to help any way he could. It was the Cornell way.

Before you start throwing darts at me because of my ranking of this book, please note that this book has a trigger in it for me.  That’s the ONLY reason why I gave it the ranking I did.  For some people, they will pass over it without a word but for me, I just couldn’t.

I’m writing this review on Mother’s Day and to say that I had major issues with Carolina’s mom would be an understatement.  Look, I get, maybe they why, she had Carolina lie to everyone.  But I didn’t like the way Rosa treated Carolina in the book at all.  I know, she is dying and has seizures/cancer but I just couldn’t get past that she has treated Carolina that way for a while.  At some point, I wished that Carolina had taken up for herself when it came to her mother.  I have a difficult relationship with my own mother and it wasn’t until I was in my 40’s that I finally had to realize that I wouldn’t have the type of relationship with her that I had always craved.  She is who she is and I’m me.

What I truly loved about the book is the romance between Sage and Carolina.  It was extremely relatable and at times swoon-worthy.   Carolina took up for herself when it came to that relationship so I knew that she could have done it with her mom.  *sigh*  Plus, Sage needed to be taken down a peg or two with this holier than thou attitude.  Thank goodness for his mom and the revelation that she told him.  Sage is just the type of hero that I like.  Not alpha or beta.  Just an all-around good guy that needed a slap upside his head by a strong woman (his mom) that finally made him realize what he was truly missing out on in life.

The Fitzgerald sisters are all here.  I’ve read all of their stories, too and it was great seeing them play a huge role in this book.  Of course, the reaction from their mother is priceless but understandable.  Too bad that the sisters had to find out the hard way that their daddy had done.  Parents can do stupid things but they are human.  Maybe more human than children would like to see.  This book is truly about family and what consists of being a family.  The good, the bad and the ugly.  It’s all here and Ms. Dixon wrote it perfectly.  Even if I didn’t like Rosa. 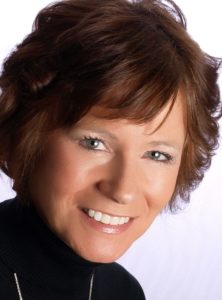 Award winning author Nan Dixon spent her formative years as an actress, singer, dancer and competitive golfer. But the need to eat had her studying accounting in college. Unfortunately, being a successful financial executive didn’t feed her passion to perform. When the pharmaceutical company she worked for was purchased, Nan got the chance of a lifetime—the opportunity to pursue a writing career.  She’s a five-time Golden Heart® finalist, lives in the Midwest and is active in her local RWA chapter and on the board of a dance company. She has five children, three sons-in-law, two granddaughters, one grandson and one neurotic cat.

Nan Dixon will be awarding a $25 Amazon/BN GC to a randomly drawn winner via rafflecopter during the tour.