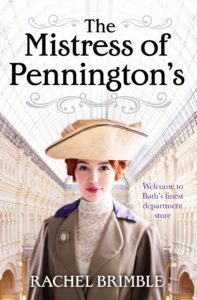 The Mistress of Pennington’s

Elizabeth Pennington should be the rightful heir of Bath’s premier department store through her enterprising schemes and dogged hard work. Her father, Edward Pennington, believes his daughter lacks the business acumen to run his empire and is resolute a man will succeed him.

Determined to break from her father’s iron-clad hold and prove she is worthy of inheriting the store, Elizabeth forms an unlikely alliance with ambitious and charismatic master glove-maker Joseph Carter. United they forge forward to bring Pennington’s into a new decade, embracing woman’s equality and progression whilst trying not to mix business and pleasure.

Can this dream team thwart Edward Pennington’s plans for the store? Or will Edward prove himself an unshakeable force who will ultimately ruin both Elizabeth and Joseph?

He moved to walk away, and she reached for his arm before she could think just how dangerous such contact could be. He halted, and even when he looked at her fingers clutched on his forearm, she did not remove them. It suddenly felt important she touch him; that he understood she had care for what he said or asked her.

Even though the physical contact set her heart racing, she held her grasp. ‘Why do you ask me about your family?’

He closed his eyes and dropped his chin to his chest.

Disquiet whispered through her. What had caused such uncharacteristic hesitation in him?

‘Joseph…’ She slid her hand from his arm, ignoring the pang of loss that the break of contact brought. ‘If there’s something bothering you, please, share it with me.’

He slowly raised his head, his blue eyes full of irritation once more. ‘I will, but not here. Not on the street. I’d prefer to come to your office tomorrow.’

How was she supposed to wait until tomorrow? Her curiosity was rife. It was clear something had changed between them. Something, it seemed, of which she was the cause.

She nodded. ‘I’ll send a message to you first thing in the morning.’

‘Thank you. Until then, I bid you good day.’

He walked away, leaving Elizabeth with questions and words flailing on her tongue. She stared after him, fearful of the pull deep in her chest that Joseph’s concerns had somehow become hers. No good could come of such caring. Her only goal should be proving her worth and capability in Pennington’s and beyond. She could not allow one man, any man, to have such an effect on her.

She inhaled a long breath and walked towards Pennington’s doors.

Welcome Rachel! Please start off by telling us a little about yourself.

I’ve been married to the fabulous ‘Mr B’ for twenty years and we have two beautiful teenage daughters as well as my baby, a chocolate Labrador called Tyler. I have been published since 2007 and have since had twenty-one novels published by small presses as well as Harlequin and eKensington.

Just recently I signed a 4-book contract with Aria Fiction in the UK and I’m absolutely thrilled to be working with such a wonderful, enthusiastic team. When I’m not writing, I like to read, knit, walk the English countryside and watch far too much TV.

Is The Mistress of Pennington’s a single title, or part of a series?

It’s book 1 in a brand-new Edwardian series, but I promise all the books will read well as stand-alone, too.

Please share your setting for The Mistress of Pennington’s. Have you ever lived or visited there? If so, what did you like most?

The book is set in the city of Bath, England which is just a short thirty-minute drive from where I live. I adore Bath! It’s steeped in Georgian and Regency history and the architecture is astounding. If your visitors have never been to this historical city, I strongly them to do so. For me, the must-sees are the Bath Museum, Royal Crescent (including No1 which is open to the public), the Roman Baths and the Theatre Royal.

As for the department store where the majority of the action in The Mistress of Pennington’s takes place, that’s inspired by Le Bon Marche in Paris.

Ooh, great question! It would have to be Nora Roberts, Philippa Gregory, Margaret Mitchell, Jodi Picoult and Alex Grecian.

I am a huge fan of these authors and would love for them to share all their tips and plotting skills, so I can finally understand this writing thing!

My second obsession to writing is knitting – I absolutely love it! Nothing is more relaxing to me than sitting in front of the TV with my knitting. I literally can’t watch TV without a pair of needles in my hands – it feels so strange and, no matter how good the show, boring, lol! Every now and then, I consider if I could start a business selling my creations but, deep down, I know I’m nowhere good enough!

I’ve shared this advice a LOT over the course of my career, but it was truly the best advice I was ever given – ‘Give yourself permission to write a crappy first draft’.

If you can get rid of your internal editor and that little voice in your head saying, ‘you can’t do this’ ‘you’re not good enough’ or ‘every word is rubbish’, your output will quadruple, and you’ll get to the all-important END. A filled page can be polished, a blank page can’t. Simple!

What can I say?  I’ve been reading Ms. Brimble since she started and this is her best book to date.  She just nails with the first book in the series.  I will admit though, that this time period is a mystery to me.  I’ve read enough all of the “other” historical time periods, including hers to know what I’m reading.  But this?  Fascinating.  I don’t watch Downtown Abbey, so I’m clueless to the time.  It’s the woman’s movement and men are still stuck in the Regency period.  Heck, they have evolved into the Victorian Age yet.

To me, Ms. Brimble brings her vast knowledge of the area, the time period but most importantly her characters.  Ms. Brimble’s characters never cease to amaze me.  Elizabeth and Joseph have got to be some of my favorites that she has written.  It’s a clean, sweet romance between them and honestly, I’m grateful for that.  Elizabeth has been belittled, badgered and put down by her father for the longest time and she has decided that she doesn’t need a man.  Her father is just awful.  I’ve never read such a vile, cruel character in all my years.  It is no wonder that his wife…oops.  Almost gave away a plot point.  But when she meets Joseph and realizes that he has the same goals as her, what’s a gal to do?

Joseph is the enlightened character in the book.  He actually understands Elizabeth and what she wants to accomplish.  Plus, come on gloves?  No one wears them anymore but I do remember my grandmother’s and my mom wearing them.  Or at least having them.  Again, Ms. Brimble takes us into a world that is elegant, interesting and above all…not boring.  Reminder:  Harlie hates when an author gives too much detail in a historical romance and not enough about the characters.  Ms. Brimble never does that.  Her books are more character driven but she surprised me with the depth of detail in the relationship between the characters and the department store itself.  I actually pictured the scene in Wonder Woman where she is trying on clothes and went from there.

I wish I could write a novel about this book but I would bore you to tears.  Again, this is Ms. Brimble’s best book to date and I can’t wait to see what happens in the next book at Pennington’s. 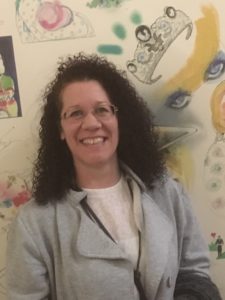 Rachel lives with her husband and two teenage daughters in a small town near Bath in the UK. Since 2007, she has had several novels published by small US presses, eight books published by Harlequin Superromance (Templeton Cove Stories) and four Victorian romances with eKensington/Lyrical.

In January 2018, she signed a four-book deal with Aria Fiction for a brand new Edwardian series set in Bath’s finest department store. The first book, The Mistress of Pennington’s, will release in July 2018.

Rachel Brimble will be awarding a $25 Amazon/BN GC to a randomly drawn winner via rafflecopter during the tour.