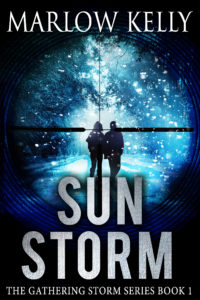 In Montana to prove her portable solar panel can solve the world’s energy problems, naïve scientist, Dr. Marie Wilson must first fight to survive and then expose the powerful businessman intent on destroying her life’s work.

Ex-special forces soldier, David Quinn is haunted by the horrors of combat, and yearns to be left alone with his beehives, but agrees to do one last job for his old mentor.

When the scariest man she’s ever met becomes her savior, Marie discovers a heart of gold beats beneath his surly demeanor.

“You’re the one who broke into my cabin. I didn’t make you associate with criminals. And for the record, my life hasn’t been all sunshine and flowers since you crashed through my door,” she shouted back, shocked by her own reaction. What was wrong with her? She never argued, raised her voice, or confronted anyone. David was making her crazy. It was the only explanation. For some reason, she had no problem arguing with him. Maybe it was because he was so aggravating.

She pointed a finger at him. “And I’m really sick of you forcing me into cars.” It was as if all her fear and stress were curled in her chest waiting for an outlet, and he was it.

“I’ve known you for less than twelve hours, and you’ve pushed me into a vehicle three times.” She knew she was being unreasonable, but couldn’t stop.

He rolled his eyes. “Where are my manners? The next time someone’s trying to kill you, I’ll just politely ask if you’d like to get in my truck. Do you want me to curtsey while I’m at it?” He shouted the last part.

“There’s no need for sarcasm.” She sat straight, folding her hands in her lap, hoping if she gained control over her body, then she would gain some much-needed restraint over her emotions.

“I think there is, and do up that window. It’s freezing in here.”

She did as she was asked, but only because her fingers were numb with the cold.

Wow.  Just wow.  This book has it all.  Thrills, lots of suspense, romance, very fast paced, a plot line that makes perfect sense, and more twists than a mountain trail.  Seriously, this book is everything I’ve been craving in a romantic suspense book for a while now.  This book moves very quickly.  Don’t even try to catch your breath and be prepared to start it and have the need to finish it in one sitting.

David and Marie are some of the more mismatched people that an author can come up with as a hero and heroine.  Sure, we’ve all read the alpha Special Forces hero to the rescue of the naive, sheltered scientist but Ms. Kelly gives them qualities that they didn’t even think they had themselves.  Marie does not come off as helpless, just confused.  David is the biggest marshmallow and he knows it.  He just doesn’t like to admit it to many people.  Also, their backstories are powerful and lend themselves to the overall arc of the book and to the relationship.

I wish I could go into the plot with a lot of detail but that would spoil it.  Let’s just say that Ms. Kelly sets up the whole story up from the beginning with most of the major players in place.  You know the major plot points but Ms. Kelly has a way of throwing you off guard and decides she needs to add a person or two to really shake it up.  I’m looking forward to her other stories in this series to further explore that.  And yes, I can’t talk about it because, well, you just have to read the book and trust me, you will be gobsmacked.  In fact, in some ways, it’s still processing in my head.

I can not tell you how much this book meant to me.  It surprised me, left my neck hurting not to mention my fingers wrapped around my Kindle and can’t wait to dive into the next one in the series.  Ms. Kelly is just brilliant in her storytelling, characterization and taking the romantic suspense/thriller genre to a whole new level.  I can’t believe that I’m just finding out about her and the books that she has written.

Don’t do what I did and find out about her too late.  You will definitely be sorry and kick yourself for it.

After being thrown out of England for refusing to drink tea, Marlow Kelly made her way to Canada where she found love, a home and a pug named Max. She also discovered her love of storytelling. Encouraged by her husband, children and let’s not forget Max, she started putting her ideas to paper. She enjoys writing suspenseful, fast-paced romance stories that always feature strong women.

Marlow is an award-winning author and a member of the Romance Writers of America.

For more information about Marlow’s books check out her website at www.marlowkelly.com

Marlow Kelly will be awarding a $20 Amazon or Barnes and Noble GC to a randomly drawn winner via rafflecopter during the tour.