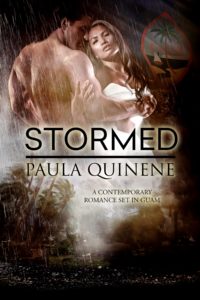 A medical doctor educated in the United States, passionate and fierce Liz Taimanglo must now fulfill her promise and return to her island home. Liz makes the long flight across the US and the North Pacific Ocean to Guam, uncertain of what her future holds. Heading into the epicenter of her family and prime typhoon season for the Mariana Islands chain, the disquiet of her heart threatens to do more damage than any typhoon might inflict on Guam. Little does Liz know, the man featured in the newspaper would indeed unleash delicious torment rivaling even a Category 5 super typhoon.

Manny Artero is adamant about fighting for his island, his culture, and the rights of Guam’s Chamorro people, after having been fired from his teaching job. That is, until Liz walks up to him with her machete-wielding eyes and her undying respect for the American military. Manny had vowed never to risk his heart again and to become a more vocal activist, but this woman threatens to challenge all his intentions about love and life on Guam. Brushing off the safer choice, he plots a series of surprises to change her mind.

For Liz, becoming a doctor of medicine was supposed to be the right path, but her universe imploded when her training failed to save the life of the most important person in her world. Though a former US Marine, Manny could no longer accept the loss of land, rights, and freedom that Chamorros continue to suffer in their own homeland. Helpless against the strengthening attraction between them, Liz and Manny must face not only their opposing political views, but the storms stirring in their hearts and the very land upon which they stand.

Liz stared at his hand as he held it out. His laughter fueled her desire. He was standing close enough that all she needed to do was take one step toward him. I want to kiss you. The ache between her thighs surged. She’d been fighting it off all day. And now that they were alone. What’s wrong with me?

He had moved even closer. I haven’t had sex in forever, that’s what’s wrong. He was too close. Her forearms rested on his pecs, and the rhythm of his chest rising and falling glued her against him. His arousal grew on her belly. Lips. Lips were so close she could see . . . Ah. He tasted of burnt sugar. Coconut. Smelled of barbecue. The strength of his hands seared through her T-shirt. Reserved yet wanting. His tongue, giving and taking. Manny’s breath was as erratic as her own. Lord help me. The nipping of his teeth on her lips. His arms flexing tighter around her rib cage and shoulder. Just this once. I want this. I need this. No, no. You can’t. He won’t . . . Naughty and nice struggled within her. The dance of their tongues, the heat of their arousals, the tensing of their muscles. He didn’t seem to mind. The memories resurfaced. Of distaste. Confusion. Rejection. Of him. Stop. The disgust in his eyes, even years past, was so visible. She pushed against Manny’s chest and untangled her tongue from his.

“I’m sorry,” Liz said, standing a foot from him, trying to tame that side of her. “I shouldn’t have kissed you. I was overwhelmed with this place.” She gestured with both hands in midair. “It’s beautiful, and romantic. This isn’t like me.” Liar.

Okay, I will be the first to admit that I knew nothing about Guam except that it was a US territory.  And that I had a cousin that worked on the island for a couple of years and he loved it.  So finding this gem to read was a true treat.  Like, I was hungry the whole time I read it, I really needed to be on a beach and driving my dad’s baby blue C7 Jeep with the top down.  Yes, I remember the early 90’s.  I was in my 20’s at the time so it was nice reading a book that didn’t have all the electronics.  Yes, they actually had to pick up landline phone to call each other.  The memories but I digress.

What really sold me on the book was Ms. Quinene’s writing.  I hate using the word fluid but it is.  Her pacing is perfect and her dialogue between her characters is not forced.  When I was reading the book, I truly felt like I was in on the conversation and trust me, I wish I could have said some things.  I really liked that while there is definitely a romance, she lets the characters explain life in Guam and how much it means to them.  Good and bad.  Manny and Liz are on opposite ends when it comes to what should happen but that’s what makes their romance and friendship believable.  Not to mention the fact that Ms. Quinene lets them actually talk to each other.  And then we have their families that are an absolute necessity in the book.  (I didn’t read the first book in the series, Conquered, which is about Liz’s grandparents but things are explained in this book.)  Also, even though this book could be somewhat classified as historical, Ms. Quinene doesn’t info dump on you.  Again, the characters are the true storytellers here.  Ms. Quinene is just typing it down for them.

However, I wasn’t expecting the heat level in the book, which isn’t a bad thing.  😉  It’s been a while for me but trust me, it is very necessary in the case of Liz’s character.  You will understand when you read it.  I loved Manny from the start.  He truly romanced Liz from the beginning of the book.  The courtyard, the gardens, and the picnics.  Oh my…and let’s not forget dealing with a Typhoon with her.  Which by the way, I really felt like I was experiencing it right along with them.

Peeps, I can’t tell you how much I loved this book.  It is a keeper for sure and now, I need to read Liz’s grandparent’s story to get the full effect.  Great job, Ms. Quinene. 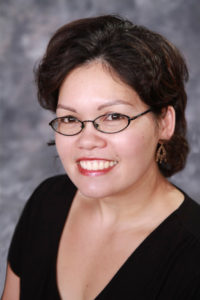 Born and raised on Guam, Paula Quinene continues to take pride in her Chamorro heritage. The Chamorros are the native people of Guam and the Mariana Islands. Paula, like many of her fellow islanders, left home to pursue a higher education. A resident of North Carolina since 2000, Paula’s homesickness has resulted in her Guam cookbooks, A Taste of Guam and Remember Guam, and her Guam romance novels, Conquered and Stormed.