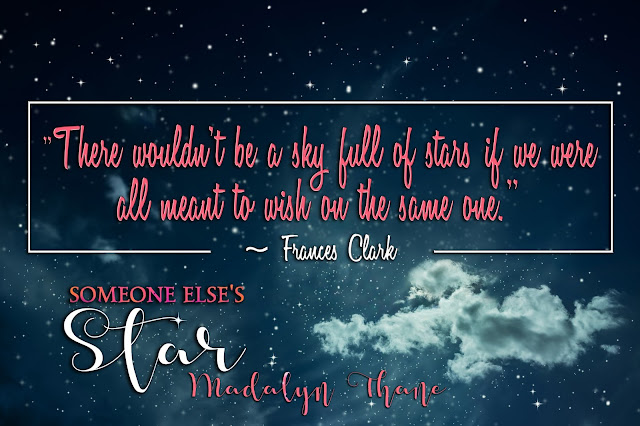 ONLY .99 cents through Release Week
Amazon

Someone Else’s Star Excerpt © Madalyn Thane 2017
“Can you please try to get along with him?” Why did Bree make her feel like she was acting like a petulant child? Sadie was not the friend in the wrong in this situation. She would never ask this of Bree. Damn. Damn, damn, damn. She hated being such a pushover.

“Get along with him? I’m not the asshole who hit him in the face with a dodgeball, forever ruining the line of his nose. I need to think about this. You have no guarantee whatsoever that he won’t try something even worse on the so-called dates. What if he tries to actually kill me, once and for all? Maybe something has finally snapped in his mind and he wants me dead. I fully believe that a serial killer could lurk behind those eyes.”

What a debut.  I mean, really?  I debut.  I’ve been reading a lot of YA over the past year and some of it has been really, really good and some meh.  This book falls into the really good category.  This can be categorized under the tropes of enemies to lovers or childhood friends.  Plus, it has the family issues that some YA books tend to either over angst about or just skim through it.  This one has just the right balance.

I won’t go into the details of how and why Jacob tortured Sadie all those years but let’s just say it isn’t what it seems.  Oh yes, boys at this age don’t sometimes express their feelings in such a nice way.  But Ms. Thane writes it in a way that is sometimes funny but heartbreaking as well.  He really is a big softie in the end.

I really liked Jacob and understood why he did the things he did.  Masking the pain that he was in for so long and then realizing that he had to do something about Sadie was the big growing up moment for him.  He really was a good guy but displaced hunger was getting to him and he realized that Sadie would slip through his fingers.

Sadie is a hoot.  She is snarky but hidden behind all that snark is a girl that has never figured out why Jacob has been so mean to her.  I loved how Bree was able to get to her see Jacob in a new light and just maybe even liking him a bit.  Their dialogue is spot on for teenagers and heartfelt, as well.  I could also understand why Sadie was a bit skeptical at first.  No guy does a 180 like that.

Overall, I really liked this novel.  The ending is OMG!  Ms. Thane has written a beautiful, funny, heartfelt, and oh so good YA book that anyone can enjoy.  Not too much angst, funny moments and two characters that you will just fall in love with.