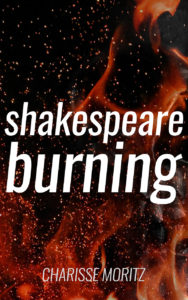 He’s the boy who wants to disappear.

One mistake and seventeen-year-old Shake LeCasse lost everything. Now there’s no going back and no way to move forward. The once-popular Varsity hockey captain is living in the basement of a grandmother he barely knows, ditching school, avoiding friends and working hard on self-destruction.

She’s the girl nobody sees.

Cleo Lee survives however she can. Lie, cheat, steal, whatever it takes, and saving Mr. Popular isn’t part of the plan. Telling him the truth about the night that destroyed his life is downright dangerous. She needs to keep quiet, be smart and let the guy she’s been half in love with since middle school throw away a future she’d do anything to have. Too bad she sucks at playing it safe.

He is sex on a stick:

I look over my shoulder to see Shake watching me. I’m wearing the purple bra and painties, pawing through shopping bags for pants and shirt to wear to school. I’m nervous about going back there. New clothes, new guy, same old me. A tag on my underwear proves I’m a total zero.

I don’t understand the look Shake gives me, but I recognize it. The slight curve of his lips, tip of his chin and concentrated attention of darkened eyes are becoming familiar. It never fails to saturate me in shivers.

I’m not complaining. He is sex on a stick. By this point, his stick should be worn out. But with a T-shirt snagged around his neck and unzipped jeans sagging off his hips, Shake’s smoldering baby blues are again plotting ways to jump my bones.

He prowls toward me. This playful Shake is a brand new animal. “I like purple.”

“That’s what you said about the red undies. And the blue. And the black.” I take a step backward. “You’re a horndog.”

“I’m focused. Goal-oriented. Found something I really want.” He steps closer. He towers over me. “I can’t get enough.”

“Oh, ah … ” My graceful self steps backward and tumbles into the dryer. My heart tries a pirouette but trips and cracks against my ribs. I’ve never felt like this before. I didn’t know anything like this was possible. It’s amazing. And scary. I need a handbook with directions, warnings, maybe diagrams, because I don’t know the next step or what the hell I’m doing. I’m bound to mess it up. Leaving this basement is the first step toward my downfall, but there’s no choice. We can’t stay down here forever. Can we?

“I’m trying. It’s hard. Soooo hard. Kind of a shame to waste it, right?” His smile is all sly boots and as warm as the hands curving round my hips. “How bout I show you just how hard I can try?”

Who needs school? Especially since there’s a whole big, bad world waiting outside, and no one wants to see Shake and me in it together. And once he takes a good look around, he’s gonna agree with them.

Man, this book is raw.  And real, sad, funny, happy and one of the most honest young adult books that I have ever read in my life.  No lie.  Best. Ever.  It’s labeled mature for a reason.  This isn’t a fluff YA book.  It deals with real issues that both Cleo and Shake are having in their lives and trying to make the best of it.  Growing up isn’t easy and with these two it’s even harder.  I won’t go into the gory details but I will tell you that the book is a bit slow in the beginning.  Hang in there.  It picks up speed and doesn’t let you go.

The secondary characters like Rat, Allie, Sam, and even Shake’s grandmother are well-written characters that really enhance their story.  I will have to say that Shake’s grandmother has no filter but she is important.  Very important.  There is also a subplot in regards to what really happened the night that Shake’s family is killed and Ms. Moritz does a fantastic job with it.  I didn’t see it coming at all but it explains a lot with Cleo.  And I will leave it at that.

Ms. Mortiz does an exceptional job of capturing just how crude, crass and unapologetic teenagers can be to themselves and the people around them.  She has taken two very broken people and put them together to “fix” each other in a way.  Only thing is, they don’t need to be “fixed” by the other person but the other person can help them in ways that they didn’t think they could.  Cleo and Shake shouldn’t be together at all, maybe not be even friends but once you read the book, you will understand the why.

Ms. Mortiz wrote one outstanding book for all older teens.  This should be in all libraries.  I know I said that about another YA book that I recently reviewed here and I agree that this one should be right next to it.  It deals with issues that no one should have to go through.  Somehow though, Cleo and Shake do come through it.  A bit burned but with each other.  Plus, the Shakespeare quotes are great and relevant to the book.

Highly recommend for older teens and above.  Just remember, Ms. Mortiz doesn’t sugarcoat some of the heady issues and there are some smexy times.

Emily Award Finalist and Melody Of Love Award Finalist, Charisse M Moritz divides her life between upstate NY and northern Florida. When not barricaded inside her writing cave or enjoying every possible minute with her husband and three kids, you’ll find her listening to 60’s music, singing offkey and looking for new reads.

Charisse Moritz will be awarding a $20 Amazon or B/N GC to a randomly drawn winner via rafflecopter during the tour.