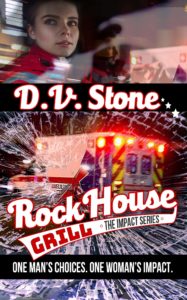 Aden House, a successful but driven chef and TV personality, refuses to slow down. His life implodes one night, damaging him both physically and emotionally. He’s rescued by a woman he thinks of as his angel.

Shay McDowell has rebuilt her life after her divorce. She juggles volunteer EMT duties and her job, while dreaming of becoming a chef. She finds her way to Rock House Grill and back into the life of the man she helped save.

Can love be the ingredient needed to survive the many obstacles they face?

“Easy, you’re going to be okay.” A soft voice eased through the chaos around him. The owner of the voice grabbed his arms and held them in a firm but gentle grip. “I’m right here with you. You are not alone.” “Can hardly m-move.” His voice slurred. “C-can’t see anything.” “You’ve been in an accident. I’m an EMT with the ambulance squad,” the velvety voice calmly explained. “You can’t see well because we’re under a tarp. Hold still, okay?” “‘K.” A small light flickered at the edge of his vision. It shone into a bag next to him. Penlight. “You’re restrained to a board. It’s to keep your head from moving and causing more injury.” She continued to talk to him. The voice reached down somewhere inside him, calming and peaceful, so he focused on it. A glow from spotlights on the outside lit whatever covered them. The shadow gave the woman the appearance of a halo-like an angel.

I have never read this author and it will not be the last book that I will read from her.  I fell in love with her writing, her voice but most importantly, her ability to make her characters relatable and realistic.  Even her secondary characters have a voice that demands to be heard and I’m so glad that Ms. Stone listened to them.

Oh and since this book is published by The Wild Rose Press, I knew that the book was going to be a keeper on the shelf.  Love that publisher.

This book is what I needed to jumpstart my weekend.  Yes, I read it just days ago.  It’s about hope, survival, and a chance at real love.  Both Shay and Aden come with a lot of baggage from the beginning and honestly, the baggage is a huge part of the story.  Two exes that just won’t go away and the suspense that comes with that.  Yes, there is a great suspense storyline in the book, and believe me, I NEVER figured it out.  And Ms. Stone put her characters through the paces when it came to the suspense and not just Aden and Shay.  Olivia, Aden’s sister, had her fair share, too.

That leads me to tell you that there are two romances in the book.  Aden and Shay take center stage but Olivia is there, too with her baggage and love interest.  Trust me, Ms. Stone does an excellent job of keeping it separate in the book so the romances don’t compete with each other.  I was connected to both of them at the same time and in the end, both romances are connected.  I won’t go into most of the book but trust me when I tell you that once you start reading, you will not put it down.  It’s been a long time since a book pulled me from the first page and I’m dying to read it again.

Aden could have been written as a douche but he isn’t.  He has a big heart but let other factors influence his life and it almost killed him.  Shay, on the other hand, isn’t the meek, weak woman that she thinks she is.  Her ex did a number on her but she gets her inner strength soon enough and it’s great.  There is miscommunication between them in the middle but honestly, they needed to really see what the other one was going through.

Again, the suspense in the book is top-notch.  It’s different and highly plausible.  I’m sure that Ms. Stone used some of her past life for some of the twists, which I can see.  Once again, I read a book that I couldn’t put down.  I need more books like this in my life right now.  I want to forget for a while and Ms. Stone let me do that.  So when is the next book in the series coming out? 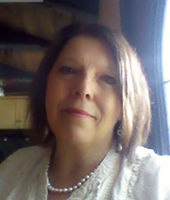 Born in Brooklyn, D.V. Stone has moved around a bit and even lived for a time on a dairy farm in Minnesota before moving back east. Despite her wandering, she always considered herself a Jersey Girl. She met the love of her life and moved, this time to Sussex County. Her husband, Pete, is a lifelong Sussex County man. They share their home with Hali a mixed breed from a local shelter and Baby a small gray cat who bosses everyone around.

She’s had varied career path from working with the disabled led to becoming a volunteer EMT, which in turn led to working in hospital emergency rooms and then in a woman’s state prison. After a few years, she took a break from medical tasks and became the owner of Heavenly Brew, a specialty coffee shop in Sparta NJ, and small restaurant in Lafayette. Life handed some setbacks, and she ended up back to medical field, but this time in a veterinary emergency hospital.

During the poor economy, she was laid–off from a long-time position she cared about. Devastated, D.V. wondered what to do with her life. Finding comfort in her love of reading, she realized it was now time to follow her dream of writing. It’s been a long road but worth every minute of it. Now a published author she also works in a people medical office again.

“Thank you for taking the time to read about me. Each time you open the pages to one of my books I hope you’ll be swept away by the story and to, never in the real world give up on hope.”