From playboy to papa!

Kendall Ross’s latest PR assignment is the perfect jump start for her career. But her client is hotel magnate Sawyer Locke—the no-holds-barred one-night stand she had six weeks ago. Sawyer knows the feisty redhead is the key to successfully launching his new hotel, but with his meddling father sabotaging his business plans, they have to keep their arrangement strictly professional. As in, no kisses. No fondling. And certainly no mind-blowing sex! Yet when their best-laid plans end with an unexpected pregnancy, the rebel billionaire must choose between his bachelor ways or losing Kendall and his baby for good!

Pregnant by the Billionaire is part of The Locke Legacy.

You know what’s even better than the one night stand, oops we got pregnant, second chance scenario?  Actually caring about the characters and hoping that they work out in the end.  I know, I read a lot of tropy books and I won’t apologize for it, but there are times when I just wanna go WTF?  What I mean is that sometimes one of the characters just doesn’t work for me but then I love the other one.  I’ve been finding that out in the last couple of books that I’ve read.  Not the case with Kendall and Sawyer.

Sawyer could have been the overbearing, alpha but he wasn’t.  He really cared for Kendall even if he didn’t call her after the wedding.  Dummy.  She waited and waited and then finally gave up.  I loved that she even mentioned it to him and then let me have it.  Kendall is my kind of heroine.  Fiesty, unsure at times but in the end finally stands up for herself when it counts.  Her work situation was interesting to read.  If it had been me, I would have said something a lot earlier to her boss.  What a witch.

Sawyer is dealing with a bunch of crap in relation to his father and I can’t wait to see how his siblings, Noah and Charlotte’s stories play out that arc.  I almost feel sorry for the man.  His kids can’t stand him but it seems like what he does to them is for the attention and love that he so wants from them.  I also loved the connection that Sawyer had with the hotel.  A speakeasy?  Sign me up.  I had a grandmother that I was very close with and when she died, her house had to be sold.  I’m still sad about it but we couldn’t buy it.

Overall, Ms. Booth does it again.  I really love her Desires and I can’t wait for the rest of the Locke Legacy.  Bring it! 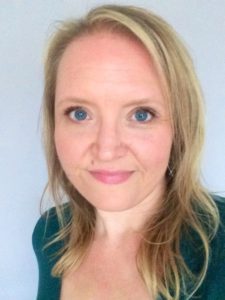 Karen Booth is a Midwestern girl transplanted in the South, raised on ‘80s music, Judy Blume, and the films of John Hughes. An early preoccupation with rock music led her to spend her 20s working her way from intern to executive in the music industry. Now a mom of two, her world no longer revolves around the world of band dynamics and backstage passes. Instead, she’s up before dawn writing sexy contemporary romance.

Back Forever (the sequel to Bring Me Back)

Claire’s Diary (a prequel to Bring Me Back)

Hiding in the Spotlight

Save a Prayer (a prequel to Bring Me Back)

That Night with the CEO

Pregnant by the Rival CEO

The CEO Daddy Next Door

Pregnant by the Billionaire

Snowed in with a Billionaire (December 2017)

Between Marriage and Merger (February 2018)

Where to Buy Harlequin Books: