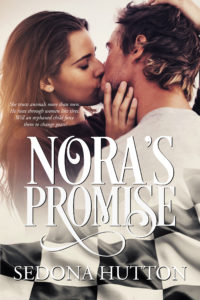 She trusts animals more than men. He runs through women like tires. Will an orphaned child force them to change gears?

With her sister’s death, Nora’s life changed in an instant. Forced to raise her orphaned nephew, the animal rescuer doesn’t expect to be dumped and fired by her kid-hating boyfriend/boss. After her own close call and a message from beyond, Nora introduces the little boy to his handsome, fast-living absentee father.

Davey Johnson is a hot-shot NASCAR driver who never wanted to be slowed down by fatherhood. But when he finds out he has a nine-year-old son, he vows to be a better father than his old man. When his first efforts fail in a big way, he enlists Nora’s parenting help. But what starts as a chore transforms into something way hotter than a final lap.

When Davey’s sponsors clash with Nora’s vegan ways, he’s forced to choose between his passion for racing and his love of Nora. Will they be able to blend their lives or will their romance run right off the track?

Five minutes later, Davey arrived. He quickly spotted her, but spent the next little while signing napkins, papers, and a ballcap as he made his way toward her. With each interruption, Nora’s jaw clenched. By the time he slid into the seat across from her, she was simmering with irritation.

“Glad you could finally make it,” she said, her voice heavy with sarcasm.

He raised a single brow and nodded at her mug. “Haven’t had enough caffeine this morning?”

When Davey turned to look for the waitress, she shot over faster than Nora could blink.

Nora rolled her eyes while Davey laid on the charm. She had to admit he was good-looking. That is if you liked the sun-kissed blond, blue-eyed, tall, lean look. And apparently, the waitress did. As Davey signed her order pad, she hung on his every word. She told him that he’d had a great season and that she had cried after he’d wrecked in some race.

Cried? Seriously? It was a race, not a matter of life and death. Finally, she took Davey’s order for a cup of coffee. When she started to walk away, Davey touched her arm and the woman turned back. Her eyes sparkled and her face flushed as she glanced back and forth between Davey’s hand on her arm and his face. “Amber, could you also bring Nora—” he nodded in her direction “—another tea?” His lips ticked up into an obnoxious grin. “She seems to be a little short on caffeine this morning.”

After Amber pulled herself together and made her way toward the kitchen, Nora pinned a look on Davey. “It must be exhausting to be you.”

I can honestly say that I picked this book up because of the NASCAR angle.  I love NASCAR.  Sue me.  Anyway, this book is so much more than a “bad boy” in NASCAR.  Davey ISN’T a bad boy at all.  He has severe family issues, abandonment issues, doing something that he is good at but does he really like it and then to find out his a father.  Yes, that’s a lot for our hero to deal with.  Nora isn’t without her own abandonment issues and then having to raise her nephew because of the bad life choices her sister did.  Men seem to walk out of her life and she feels that Davey will, too.

Let me just tell you that this book will grab you from the beginning and before long you are lost in it.  The writing is top notch and it just flows like a stream.  No lags and while the book deals with some serious heart rendering things, there is plenty of funny moments.  The meet-cute between Nora and Davey is one of my top 5 moments.  Yes, its that funny and snarky.  What’s even better between Nora and Davey is their honesty with each other.  Both of them still have some growing up to do but they do that on their own.  Nora doesn’t “need” Davey and Davey doesn’t “need” but together they are perfect.

Ben is very much part of the story.  He is not window dressing.  He is a well thought out character on his own.  Davey just has to figure out what to do with his son.  Cruz, Steph, Pap, Ella, AJ (love him) are secondary characters that are also awesome.  You will come to love them as much as you will Nora and Davey.  They also don’t “over help” when it comes to Davey and Nora’s relationship.  I loved that Ms. Hutton let them work through their problems themselves and didn’t rely on someone else.

Now, the vegan part of the book.  Look, I love meat and animals.  But I just can’t be a vegan.  I have a cousin that is vegan and I respect her and her beliefs.  So I thought that that aspect would be a bit preachy but it wasn’t.  The scene with Davey and Ben at the restaurant is actually pretty funny and Davey deserves it.  But my favorite scene is at the end with AJ and Davey.  Nora and Davey didn’t have to compromise on their beliefs but did have to figure out what was best for them.

The animals are just awesome.  I don’t think I’ll ever look at piglets the same way again.  Plus, knowing that the cow is there for not just Nora but Davey, too.  *sigh*

If you are looking for a just a read contemporary romance without all the hype, issues that anyone and everyone has faced, a slow burn romance that burns hot at times, animals that you want to take home and knowing that Nora and Davey will linger in your thoughts, this is for you.  I can’t wait for AJ’s book next year.  He’s a hoot and a good friend to Nora and Davey.

Author Sedona Hutton finds inspiration in the beautiful Smoky Mountains of Tennessee, where she lives with her husband and curly-coated retriever. In addition to writing, she’s a Reiki Master and a certified Chopra Center Meditation instructor. She enjoys reading, yoga, gardening, playing with her dog, and riding motorcycles. Her “Peace, Love, & Joy” blog can be found on her website. Visit her at www.SedonaHutton.com, Facebook @SedonaHuttonAuthor, and Twitter @SedonaHutton.

The daughter she gave away. The family she always wanted. The journey to redefine her fate. If you like headstrong heroines, heartwarming stories of family and forgiveness, and new age concepts, then you’ll love this empowering tale. Cloud Whispers was a Finalist in the 2018 Readers’ Favorite Contest and an Official Selection in the 2018 Summer eBook Awards for New Apple Literary.

Sedona Hutton will be awarding a $10 Amazon GC to a randomly drawn winner via rafflecopter during the tour.