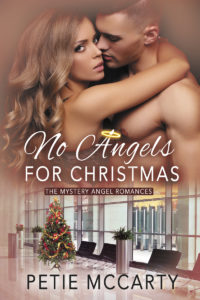 No Angels for Christmas

No Angels for Christmas . . . a cozy romantic mystery with suspense from The Mystery Angel Romances series. An angel hidden in every book waiting for you to figure who . . .

Child psychologist Rachel Kelly isn’t quite sure how to handle the situation with her newest client — a six-year-old boy who says he can talk to angels and one is coming to help Rachel. She already has her hands full of trouble this Christmas season, and things quickly take a turn for the worse when a stalker crashes Rachel’s Christmas party and takes her young clients hostage.

Police negotiator, Lt. Jake Dillon, walked away from his fiancée Rachel when she suddenly balked at having kids. His kids. Yet when the hostage crisis erupts, Rachel calls Jake first. Now he has a choice to make — stand back and wait for the cavalry to save Rachel or step in and try to save her himself. Time is running out, and Jake may be their only chance for rescue.

Unless Rachel’s little angel-spying client is telling the truth…

“Since this isn’t our Publix, I’m assuming you stopped on your way home from work,” Jake said when she reached his side.

Our Publix? Did he even realize he’d said that?

“My apartment’s just around the corner.”

That simple statement shouldn’t hurt—she knew his apartment was near here—but it did. She nodded.

“I’ll help you out.” He gently nudged her hands off the cart handle and took over, setting his own bag on top of her stack.

Rachel paced alongside the grocery cart as they moved through the electronic door and knew a moment of joy that her parking spot lay at the far end of the lot. She would have a few extra moments to be with him. How pitiful was that? She eased a step closer, anxious to inhale his unique scent of soap, aftershave, and pure Jake.

He glanced over and caught her staring. Heat rushed to her cheeks, and she hoped he didn’t notice the flush.

“Jake, look out!” She grabbed the cart to stop it just short of a car backing out.

He gave her his sexy crooked Jake-smile. “Guess I should keep my eyes on the road.”

Her heart ka-thumped inside her chest. “At least until we get to the car.”

His smile went to an all-out grin.

Had she just flirted with him? Had it been that easy to get past her trauma for a few brief minutes?

Far sooner than she would have liked, he stopped the grocery cart next to her Honda and helped stow her bags in the trunk, leaving his in the cart.

“Thanks for helping me,” Rachel told him.

“I’m glad you decided to stop at this Publix tonight.”

“Yeah. I’m glad I got to see you.” Jake grazed a knuckle gently across her cheek leaving a streak of tingly nerve endings in its wake.

Why couldn’t she finish a sentence tonight? Bad enough she felt pathetic, now she sounded pathetic.

“You thought I might’ve what?”

She swallowed hard. “Might’ve found someone else by now.”

He studied her for a long moment. “After all we meant to each other, you thought I’d go right out and grab a new girlfriend, just like that?” His mouth tightened to a thin line.

She hadn’t meant to rile him. The last thing she wanted to do was fight with him. Without thinking, she reached up and brushed two fingers gently across his lips, wanting that sensuous mouth to smile at her again.

She startled him, and he jerked at her touch. She whisked her fingers away. “Sorry. I don’t want you to be mad.”

His gaze trapped hers, his pupils expanding until little of the brilliant green remained. “There’s no new girlfriend, Rachel,” he said gruffly.

He slowly shook his head, his all-dark eyes tracking hers. He seemed closer than he’d been a minute earlier.

She exhaled hard. “Not yet anyway.”

Why had she said that?

He was definitely closer now. If she eased forward just a few inches, she could press her lips to his, feel that certain sizzle that always flared when they touched. But Jake had walked out on her. His move. Though she ached with the need to hold him, if only for a second.

“Yes. Very glad. I don’t want you to find someone else—”

His lips brushed hers into silence—sweeping gently across as though seeking permission—the touch just light enough to make her lean in for more. He didn’t miss the movement and kissed her again, his lips settling on hers and nibbling at her lower lip.

The sensuous teasing had her knees growing weak, and she grabbed the placket of his dress shirt to steady herself.

He didn’t miss that movement either, and he cradled her cheeks in his big palms to deepen the kiss.

Suddenly lightheaded with desire, she twisted her knuckles into his shirt to keep him close. She didn’t care if they were kissing in front of God and everybody. If Jake wanted to throw her down here in the middle of the Publix parking lot, she was ready. She could always shop at Winn-Dixie.

Admittedly, this is not my first book by Ms. McCarty and this is the second book in a nonconnected series that I have read.  Ms. McCarty just keeps getting better and better with her storytelling and characters.  I will warn you though, this book has a lot of characters so you really need to pay attention when you read it.  Did I figure out the angel in this story?  Not a chance but when it was revealed I was actually shocked.  I would also say that this book has romantic elements, not a full-blown romance.  Jake and Rachel have a lot to go through before you get the big payoff and its worth it in the end.

Jake and Rachel have broken up at the beginning of the book and only the reader and Rachel know why.  Poor Jake.  He just can’t get a break with Rachel and their relationship.  Miscommunication is a big thing with these two and a time or two, I just wanted to bash them in the head but then there would be no story to finish.  🙂  Both have huge hearts when it comes to their jobs and it shows but when it comes to each other, not so much.  I won’t tell you the reason why they broke up but I understand it.  It’s just that Rachel really needed to be honest with Jake from the beginning.

The mystery and suspense in the book are fantastic.  Taut and suspenseful, I honestly didn’t know how it was all going to play out in the end.  Truly, I didn’t.  Just when you think the story is over, there are two more very important scenes that are just terrific and really solidified the book for me.  The kids in the book, Chad, Emily and Alex are dealing with some issues that are not easy to read in the book.  From physical abuse, a child pedophile and then just thinking your child is crazy because he can see angels.  Ms. McCarty has done her research and it shows.  Bravo and I loved how the kids bounded in the end.  Especially Chad and Emily.  Brought a smile to my face.

Overall, I really liked No Angels for Christmas.  Ms. McCarty knows how to write a book and keep the reader engaged.  This is not an easy book to read in parts but well worth it in the end.  Plus, Jake and Rachel…well, you need to read it.  Enjoy. 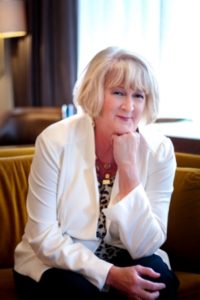 Petie shares her home on the Cumberland Plateau in Tennessee with her horticulturist husband and a noisy Nanday conure named Sassy who made a cameo appearance in No Angels for Christmas.

Petie McCarty will be awarding a $10 Amazon/BN GC and 3 ebook copies of Duke Du Jour, book 1 of the Lords in Time series to 4 randomly drawn winners (one prize per winner) via rafflecopter during the tour.

5 thoughts on “#Review of No Angels for Christmas by Petie McCarty w/a rafflecopter giveaway!”