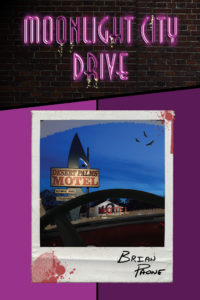 11:18 p.m. Subject is checking into the Desert Palms Motel, accompanied by an unknown female.

Snapshot in the parking lot. Man and woman embrace. Betrayal, I see it every day, like my own reflection in the mirror staring back at me. Another case, another bottle of booze, life is no longer a mystery to me …

… Because I’m the private eye, hot on your trail; the top gun for hire. You’ll find me lurking in the shadows, always searching for a clue. I’m the bulletproof detective. I got my eye on you …

I’m digging you a desert grave, underneath the burning sun. You won’t be found by anyone. Vultures circle in the sky, and you, my dear, are the reason why.

… I was always easily influenced.

Smith spit out another peanut shell onto his Chevy’s floorboard as his gaze stayed trained on the Desert Palms Motel’s front entrance. His fingers instinctively found the opened bag in the complete darkness and pinched another nut. He squeezed his eyes closed to ward off the simmering residual headache from the most recent blackout. The sound of the rain pelting the windshield was soothing.

“Come on. Where are you? You took the last two nights off. I can’t imagine you being on vacation.”

Headlights turning into the parking lot diverted his attention from the motel’s front door. He squinted to decipher the make and model of the vehicle through the downpour. A Bentley. He sighed and returned his focus to the motel as he fingered the brim of his newly purchased replacement fedora and then tossed it next to him in frustration.

Smith removed his revolver from his shoulder holster and checked that all six chambers were loaded for the umpteenth time. He secured the weapon and grabbed the small notebook from underneath his discarded fedora, lying on the passenger seat, where Wynn should be sitting. But she had maintained radio silence throughout the past two days since storming from Hank’s office. He shook his head in disgust for letting Wynn’s drama distract him from the job at hand.

He swiped the Chevy’s dashboard with his palm to clean off the thick layer of dust that had collected from months of neglect. He wiped his hands on his pants, leaving a graying smear across the fabric covering his thighs. He reached into his trench coat’s inner pocket and removed a silver flask. He opened the top and looked at the engraved insignia on the front. His index finger traced the shining eyeball hanging freely in the cut-out middle of a pyramid. Taking a swig from the decorated flask, he grimaced as the brown liquid hit the back of his throat.

Can I be honest with you?  Really honest?  I’m not sure how to word this review.  As you can tell but the genre listing its a mixture of things.  Plus, its based on an album.  Like if I were to write a novel about Queensryche’s Operation:  Mindcrime.  Or Pink Floyd’s The Wall.  Yep, its that type of book.  Trust me, I’ve never even heard of the album but with Mr. Paone’s prose, I did hear it.  And hear it, I did.  It’s kinda weird, suspenseful, sexy and mind blowing all at the same time.

Mr. Paone has written a book that completely surprised me.  Of course, since I didn’t have a clue going in, I just went along for the ride.  It’s dark, twisted with characters that you despise but can’t help like at the same time.  Again, it’s just weird but a good weird.  Since I read other books besides romance, I read a lot of “different” books but this one is in the top ten of the best books that are not in the true romance category.  I loved how Mr. Paone was able to pull this romance reader into his world and hold me until the very end.  I’m still thinking about this book even though I finished it a while ago.

Again, I’m sure that I’m rambling but I honestly don’t know how to put my feelings on the page about it.  Creepy, weird, different, and completely well written.  Mr. Paone knows how to use his words.  It’s atmospheric, with a paranormal twist that I never saw coming.  Does he finally get the bad guy preying on prostitutes?  You will have to read it to find out.  If you are looking for something different, read this book.  I’m glad that did.  Now I need to figure out how to write that novel featuring Operation:  Mindcrime.  Which I HIGHLY recommend.  Geoff Tate at his best. 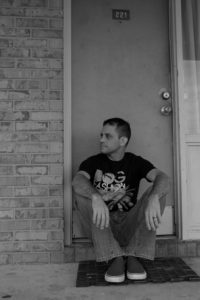 Brian Paone was born and raised in the Salem, Massachusetts area. Brian has, thus far, published four novels: a memoir about being friends with a drug-addicted rock star, Dreams are Unfinished Thoughts; a macabre cerebral-horror novel, Welcome to Parkview; a time-travel romance novel, Yours Truly, 2095, (which was nominated for a Hugo Award, though it did not make the finalists); and a supernatural, crime-noir detective novel, Moonlight City Drive. Along with his four novels, Brian has published three short stories: “Outside of Heaven,” which is featured in the anthology, A Matter of Words; “The Whaler’s Dues,” which is featured in the anthology, A Journey of Words; and “Anesthetize (or A Dream Played in Reverse on Piano Keys),” which is featured in the anthology, A Haunting of Words. Brian is also a vocalist and has released seven albums with his four bands: Yellow #1, Drop Kick Jesus, The Grave Machine, and Transpose. He is married to a US Naval Officer, and they have four children. Brian is also a police officer and has been working in law enforcement since 2002. He is a self-proclaimed roller coaster junkie, a New England Patriots fanatic, and his favorite color is burnt orange. For more information on all his books and music, visit www.BrianPaone.com