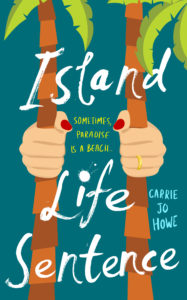 Peg Savage has contractually agreed to move to Key West, Florida. The smudged signatures on the damp cocktail napkin are irrefutable proof.

“An adventure…” her husband Clark says.

Peg can’t swim; she’s afraid of bridges (there are 42 of them); and she doesn’t want to leave her friends. However, after a bottle of Cabernet, a move from Chicago to the southernmost city in the United States seems like the best decision ever.

But now Clark has taken a long term job in Cuba and she’s on her own.

Neither her dog Nipper, nor the ghosts in the attic, offer up any good advice. But how hard can it be living in paradise?

Peg dives into island life but the more effort she makes, the wider her wake of catastrophes. She is tortured by a paddle board, a giant poisonous toad, the local Conservation group, and the patron saint of hurricanes. Not to mention the persistent sweat rash under her left breast.

A tropical depression descends on the island – one that can’t be cured with medication. Peg must gather her strength if she has any hope of surviving the storm.

Welcome Carrie Jo Howe! Please start off by telling us a little about yourself.  Hi and thank you for hosting me! I’m a Chicago transplant to Key West, Florida. The island is the southernmost part of the United States and closer to Havana than a Target store.  My husband took a job transfer five years ago. I thought it was going to be fairly temporary, yet we’re still in Paradise. We have three grown boys and a 13 year old Vizsla. The dog is the boss of us all.

Is Island Life Sentence a single title, or part of a series? The book, is the first part of a trilogy. I’m working on the second book now.

What were your inspirations for the story? Well, Peg is a fictional Mid-western woman who moves from Chicago to Key West. It sounds familiar, doesn’t it? Peg’s (mis)adventures are based on true stories. Yes, my dog was nearly poisoned by a deadly Bufo Toad. Yes, my house is haunted by haints (Key West ghosts). Yes, I survived a category five Hurricane named Irma.

Please share your setting for Island Life Sentence.  Key West is a lush tropical island at the bottom of the chain of the Florida Keys.  It is aptly named “the end of the road” for its location and for the fact that it attracts some lively characters.  There’s some funky evolution going on down here–Darwinism at its finest.

When did the writing bug first bite? I think of myself as more of a storyteller.  I like to write about funny or strange events. For example, my first book, Motherhood is Not for Babies, tells about my shock at the effort it takes to raise a family.  I was surprised at how uncooperative they all were. It is therapy to write about it–makes it seem less overwhelming.

Who are you favorite authors, book/series?
The Florida writer, Carl Hiaasen  is an an ex-journalist who writes about Florida and all of its anomalies. Before I moved to Florida, I thought he exaggerated his humorous tales…I’ve since learned that, in reality, he’s quite factual.  My favorites of his books are Tourist Season and  Razor Girl.

I’m a fan-girl of Tina Fey’s Bossy Pants and Amy Poehler’s Yes Please. These two friends are strong and funny. In my dream world, I’m sitting at a table with them in a restaurant and not getting arrested for stalking.

Do you have any hobbies or special things you like to do in your spare time?  I love my teachers at the Pilates Studio of Key West. They know their stuff and make the classes demanding but entertaining.  That’s saying a lot since the exercise program uses torture terms like, “reformer”, “straps” and “chair”. I also volunteer as a mentor for a high school student for the program Take Stock in Children.  TSIC provides college tuition for low-income, academically minded students. I’m proud to be part of such a well run and necessary organization.

What’s the strangest thing you’ve heard or seen?  Hmmm, let’s see…since it’s Key West, that’s tough to narrow down. Would you mind if I shared a photo of Happy Hour last Friday?  Words can’t do this justice. 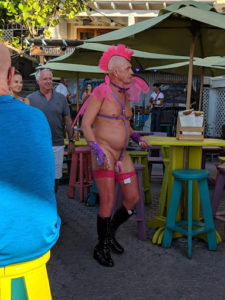 Is it okay to say that while I read this book I almost peed my pants?  There are parts of this book that had me laughing out loud and often.  Other parts, I wanted to shake Peg and tell her to put on her big girl panties and suck it up.  Yes, at times, Peg came across as the Too Stupid to Live heroine but once she finally figured out stuff, her brilliance shined.

The situations that she finds herself in are at times funny and then, farfetched but they are meant to be.  She is a true “fish out of water” when it comes to living in Key West.  I’ve never been but I have been to Chicago many times, so her life back in Chicago resounded with me.  I couldn’t imagine moving from Chicago to Key West but it would be an adventure for sure.  I did like the fact that the author had the same experiences that Peg did, Clark not withstanding.

Her husband is a douche.  I could use a stronger word but I’ll keep it PG at best.  The ending of the book is definitely poetic justice but I really did want to know what Peg was going to do now.  I understand the sequel is being written and I can’t wait to read more about Peg and her dog, Nipper.

Randolph, Trudy, Bernie, Nipper, the ghosts and even the setting are perfect secondary characters.  Ms. Howe has written a great chick lit book with heart, humor, a bit of ridiculous but overall a great read.

It was dark. The power and the air conditioning had gone out hours ago. Peg hugged her dog under the makeshift bed-tent, clutching him to her sweaty pajama’d breasts.

An engraved locket pinned to Nipper’s blue life vest dangled under his pirate dog collar. Hurricane rain pummeled the bedroom window – the violent wind shook the glass panes. Peg wondered about the moaning sound until she realized it was coming from her own throat.

She shrieked at the sudden crash on the metal roof. Several days of binge drinking without proper oral hygiene, or any hygiene for that matter, produced noxious vapors in the tent. Nipper’s nostrils flared as he took in the odors and licked her fluorescent orange, cheesy, tear-stained fingers. 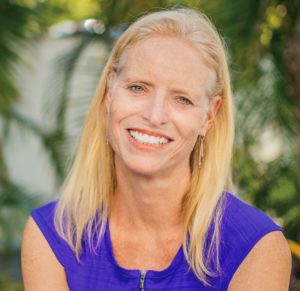 After raising three boys in the suburbs of Chicago, Carrie Jo Howe now lives in Key West, Florida with her husband and her dog. Her latest novel, Island Life Sentence, is a fictional account of an American Midwestern woman who feels like an alien in the “one human family” of Key West. Carrie Jo’s first book, Motherhood is NOT for Babies, received a rave review (thanks Mom), and works wonderfully as a form of contraception. Her blog Florida Keys Crime Report, tells of all the goings on in the Keys, where bank robbers get away on bicycles, and perps caught with undersized, pinched, out-of-season lobsters get more jail time than drug runners. She is currently working on the sequels to Island Life Sentence.

Carrie Jo Howe will be awarding a $10 Amazon/BN GC to a randomly drawn winner via rafflecopter during the tour.