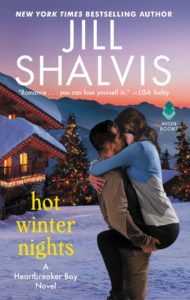 Most people wouldn’t think of a bad Santa case as the perfect Christmas gift. Then again, Molly Malone, office manager at Hunt Investigations, isn’t most people, and she could really use a distraction from the fantasies she’s been having since spending the night with her very secret crush, Lucas Knight. Nothing happened, not that Lucas knows that—but Molly just wants to enjoy being a little naughty for once . . .

Whiskey and pain meds for almost-healed bullet wounds don’t mix. Lucas needs to remember that next time he’s shot on the job, which may be sooner rather than later if Molly’s brother, Joe, finds out about them. Lucas can’t believe he’s drawing a blank on his (supposedly) passionate tryst with Molly, who’s the hottest, smartest, strongest woman he’s ever known. Strong enough to kick his butt if she discovers he’s been assigned to babysit her on her first case. And hot enough to melt his cold heart this Christmas.

It took Lucas Knight longer than it should have to realize he had a woman in his bed, but to be fair, he had a bitch of a hangover. Even worse than that, last night was a blur, prompting him to take quick stock. One, there was a bundle of sweet, soft curves against him. Two, his head was currently threatening to secede from the United States Of Lucas. And three, his side hurt like … well, like he’d been shot.

It’d been two weeks since he’d gotten caught in some crossfire on the job and he hadn’t yet been cleared for more than light duty – something he’d obviously managed to ignore last night given that he was palming a nice, warm, feminine ass.

Straining his brain, he remembered taking a pain med before going to O’Riley’s Pub to meet up with some friends. A client had been there, someone he’d recently helped save from a multi-million dollar corporate espionage. The guy had ordered shots to toast to Lucas and … shit. Knowing better than to mix pain meds and alcohol, he’d hesitated, but everyone had been waiting on him, glasses hoisted in the air. Thinking just one shot couldn’t hurt anything, he’d knocked back the drink.

Clearly, he’d been wrong and it’d been enough to mess him up big time, something he hadn’t been in years, not since his brother Josh had been killed. Shoving that away for another time – or never — Lucas cracked open one eye, but when his retina was stabbed by a streak of sunlight glaring in through the window, he immediately slammed it shut it again. Taking a deep breath, he told himself to suck it up and opened both eyes this time, learning two additional facts.

He was naked and completely uncovered.

And the woman snugged up at his side was rolled up in his comforter like a burrito.

Don’t kill me when I admit that this is the first book I’ve EVER read by Ms. Shalvis.  As you know, I can be so slow when it comes to reading the “bigger” known authors, so getting the opportunity to read it and review was an honor and a treat.  Ms. Shalvis did NOT disappoint me at all.  Now I understand all the fangirling, swooning, sheer love and love of her writing.

Lucas and Molly are a match made in heaven.  Since I didn’t know them from the other books, Ms. Shalvis does an excellent job of giving me tidbits of their relationship together and their relationships with the other characters in the book along the way.  I love it when an author doesn’t forget that they might have new readers to their work and need a little bit of information when we jump right into a series.  The secondary characters are top notch and she does a great job of letting them do their thing to move the story along but know when to fade them to the background.  If I had one complaint is Molly’s brother Joe.  I’ve never been a fan of the overbearing brother when it comes to the heroine but I also understood where he was coming from.  Due to a lack of judgment on his part, he was still paying for a mistake that he made when it came to Molly, so he was doing it out of trying to make amends but still…At times, he and Asher really needed to back off.

Molly is such a bright heroine.  Nothing gets her down and it becomes evident that she is exactly what Lucas needed in his “dark” life.  He just really never stood a chance and he knew it.  The banter between them is golden.  I don’t think I’ve ever really belly laughed while reading a book in a long time.  Plus, I just loved how Molly strung him along when it came to the opening of the book.  Priceless.

The suspense element in the book is spot on, too.  It doesn’t overpower the romance and at times, it’s actually funny.  Ms. Shalvis blends the sexy times, suspense, and the emotional extremely well.  Why have I never read her before?  I totally get why other people say that she is the ultimate comfort read.  I settled in and never stopped reading.  I was hooked and I will not make that mistake again when it comes to Ms. Shalvis.

If you are looking for a great comfort read but a trully terrific author, look no further than Ms. Shalvis.  I have gotten on the train and I don’t plan to get off. 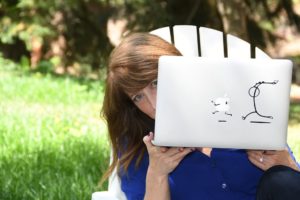 New York Times bestselling author Jill Shalvis lives in a small town in the Sierras full of quirky characters. Any resemblance to the quirky characters in her books is, um, mostly coincidental. Look for Jill’s bestselling, award-winning books wherever romances are sold and visit her website,www.jillshalvis.com, for a complete book list and daily blog detailing her city-girl-living-in-the-mountains adventures.