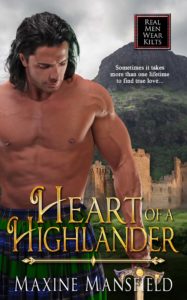 Heart of a Highlander

Staff Sergeant Ian Mackay didn’t care if he lived or died. He’d left what really mattered strewn across Afghanistan three years ago. All the self-help groups and doctors in the world couldn’t assuage his guilt. But when an accident takes his life and Fate steps in with an offer to fix what was once unfixable, he jumps at the second chance to save his men. Now he’s stuck in a strange land, in an even stranger time, and expected to bed his equally strange but desirable new bride. Healer Aila Gordan of the Sutherland clan thought her betrothed dead, had even seen his lifeless body the night before their wedding. Why then is her sworn enemy, Ian Mackay, standing before the priest, waiting for her to repeat the vows that would make her his wife? The fairies must have possessed his body, a frightening notion, indeed. But marriage to the handsome laird, possessed or otherwise, couldn’t be any worse than living in her brother’s castle where, like all women in 1643 Scotland, she has no freedom. And if the kiss at the altar is any indication, she could just steal the heart of a highlander.

“I’m from the future, Aila,” he spat out. “Almost four hundred years from now to be exact. But I’m not from this body you now see me in. You were right. The original Ian Mackay was dead that night you found him. He was one of my ancestors, you see, and we shared the same name and linage. When I died in an accident—in the future—Fate himself sent me back into the past and into this Ian Mackay’s body to correct a mistake that should never have happened in the first place.”

“What should nae have happened, Ian?” she asked.

He gulped. “Your death, Aila.”

Yall this book.  I love a good time travel and this one is the best I’ve read.  There were things that I wasn’t expecting at all.  Let me explain if I can.

Fate is hilarious.  Great characterization and I felt the frustration that Ian had whenever he was trying to talk to Fate.  There is a saying that Karma is a fickle bitch, well, Fate at least has a sense of humor.  I loved how Ms. Mansfield used Fate to flesh out Ian’s backstory and his motivation to get back to his own time.

Ian is one of those characters that you just love from the first page.  He means well and has a heart of gold.  His issues with PTSD are real and are dealt with honestly.  He really did feel bad and thought they only way to help was to go back in time.  Little did he know how much Aila would change his life for the good.  I especially loved how Ms. Mansfield shaped their relationship as equals based on his parent’s relationship in the past.  Most often, historical writers still have their women as fragile women that can’t handle much on their own.

Which brings me to Aila as the heroine.  She was strong, smart and funny all at the same time.  Her belief that Ian was a fairy is hilarious.  The Scots are very religious and believe the legends that are passed on.  (Watch Brave, you’ll understand what I mean)  But what really stood out with me was her ability to believe Ian in the end and loving him no matter what.  Now her brother, Fergus was a tool in the beginning but towards the end, he ended up being a great character for both Ian and Aila.

But folks, this book is set in the Northern Highlands so some of the dialogue is Celtic (LOVE), and their way of life is brilliantly played out.  Ms. Mansfiled did her research and it shows.  She also doesn’t weigh the book down with all the very small details that some authors do when writing this time period.  She has a very deft hand and knows when to back off and just let her characters tell the story.

Again, this book.  It’s spicy and I love how Ms. Mansfield lets the characters own it.  It feels natural and not rushed.  Pick up this book and read it.  The ending is beautiful.  I wasn’t expecting it and I sighed and swooned in the end. 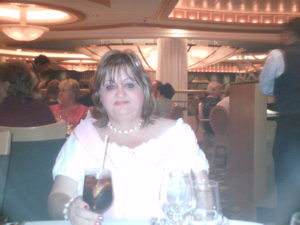 Maxine Mansfield will be awarding a $25 Amazon/BN GC to a randomly drawn winner via rafflecopter during the tour.