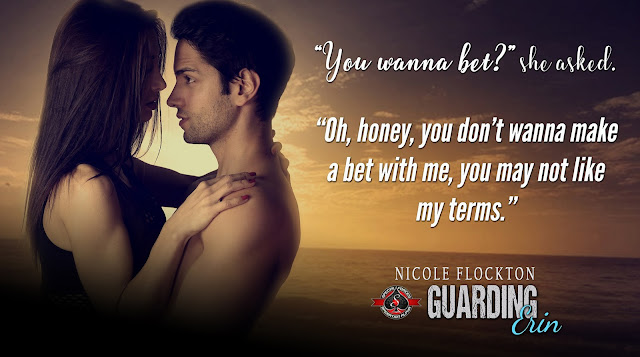 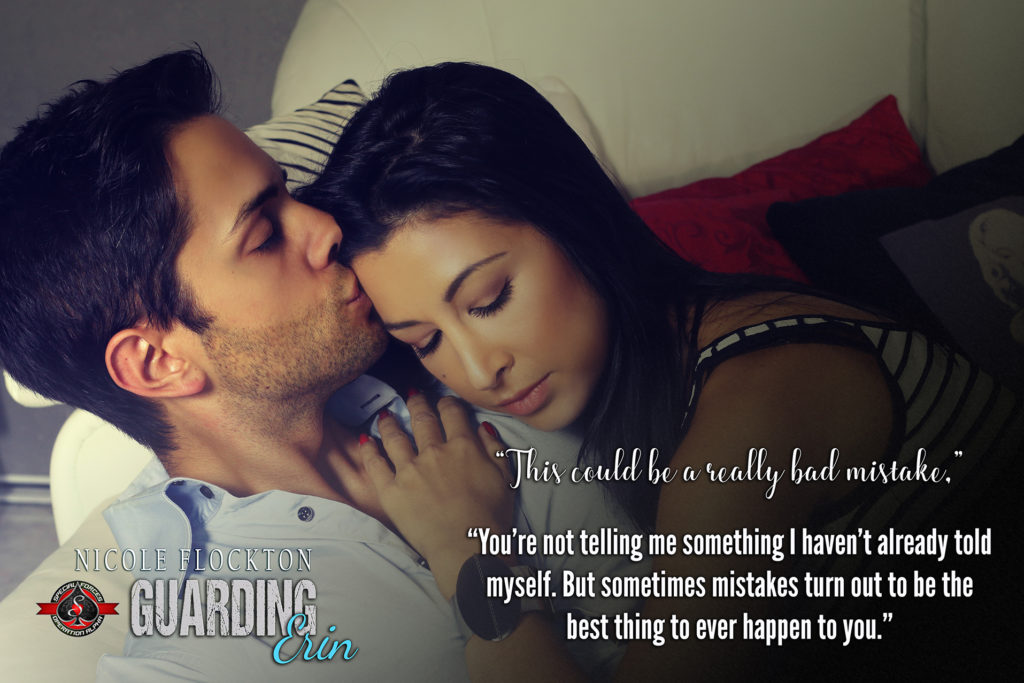 Guarding Erin Excerpt © Nicole Flockton 2017
Exhaustion bit at her heels. It had been a shit of a day. A computer software problem had all their reservations jumbled up tighter than a pair of stockings in a washing machine. The last thing she wanted to do was go to dinner, but she really needed a girl’s night.
She turned the light off and closed her office door. At the end of each day a sense of pride filled her with all she’d accomplished in the past four years. Hard work and determination had gotten her to the position of General Manager quicker than she ever imagined possible.
Before she left, she stopped at the registration desk. “If any issues crop up overnight, call me. No matter what the time.”
The clerk smiled. “Certainly, Erin. Hopefully, I won’t have to. Have a good night.”
“Thanks.” Secretly, Erin prayed her phone wouldn’t ring. After dinner she planned to go home and fall into bed. Between the stress of Bryan turning up in her life again, and today’s work drama, a solid eight hours of sleep sounded like an unreachable dream.
She skipped down the stairs, glad to be outside and absorbed everything that made New York, New York. The sounds of taxi drivers sitting on their horns, the aroma coming from the hotdog stand on the corner, the flow of people streaming out of the subway stations.
“Hello, Erin.”
Shocked at hearing Carlos’s voice, her foot slipped and she missed the bottom step. Instead of finding herself kissing the sidewalk, warm, strong arms closed around her. Without thinking, she laid her head on Carlos’s chest. She breathed deeply and the aroma of hotdogs was replaced with a tangy citrus smell that was intoxicating. She inhaled again.
He chuckled. “Did you just smell me?”
Erin came to her senses and pulled away from him. Surprise made way for embarrassment. “What are you doing here?”
If she thought her terseness would put him off, she was living in a fantasy world. Instead of putting distance between them, he grabbed her hand again.
“I got your text message and I was worried.”
“What text message?” Confusion colored her thoughts. She knew she’d sent him a text last night, but she hadn’t asked him to travel up to New York to see her. She expected him to call.
His hand went to his pocket and pulled out the phone, all the while he maintained his hold on her. Her skin sizzled from the connection, drawing her back to the first time they’d kissed when they’d been sixteen. At the time, she’d thought her reaction to his touches and kisses had been because he was her first boyfriend. A crush that had turned into juvenile love. Now she had to wonder.
After the first couple of dates with Bryan, her body had never flared to life like hers was doing right now. They were only holding hands for goodness sake.
“This message.” A phone was shoved under her nose.
“I didn’t send …” She re-read the message and then it hit her. This was the message she’d started to send to him while on the subway and then she’d had second thoughts. “I, um, I didn’t mean to send it to you.”
“Right. Who were you sending it to.”
She could fabricate that she was sending it to a friend. Somehow she didn’t think he would buy it. “You.”
“But?”
“Well you didn’t respond to my message last night and then I didn’t know what to say.”
Everything she’d told him was the truth. The only problem was she still didn’t know what to say to him. For a brief second on the train she’d wanted to ask him for his help with Bryan. She’d helped him, he could help her. But could she ask that of him though?
“I was out last night, and didn’t see your message until I checked my phone this morning.”
“Uh huh. Well,” she looked at their connected hands and then at the crowd bustling around them. “I’ve got plans, so I’d better get going. Good seeing you, Carlos.”
She went to pull her hand out of his grip, but he tightened his hold on her.
“What’s going on, E? And don’t tell me nothing. I know you. I can see the tension in you.”
Anger rippled through her and she yanked her hand out of his grip. “You don’t know me at all now. You were the one who walked away from me. From us. And yes, I’m tense. After the shit day I had, you’d be tense as well. Now, if you’ll excuse me I’ve got places to be. Real friends to catch up with. Goodbye, Carlos.”

I loved this story so much.  Yes, loved it.  Second chance, childhood friends to lovers tropes that I love.  Ms. Flockton is superb at writing it.  Her knowledge of her characters, the backgrounds of them and the secondary characters in the book are on point.  Keep in mind that this is a Kindle World book so knowing the details of other members of the team is key and Ms. Flockton knows her stuff.

What’s refreshing about the book is that Erin and Carlos in how they lived their lives apart from each other but had a deep understanding of how the other one lived.  I know it sounds confusing but they both knew that the other one had grown up since they left each other all those years ago.  They still are hot for each other and in love with each other.  I loved how Erin reached up to the other women and asked how they dealt with what their husbands do for a living.  That’s never really discussed in a military book before.  Ice cream and wine.  Ha Ha!   Again, it’s refreshing.  Plus, Carlos knew why most of his friends were single even if he didn’t like being single at all.
Carlos and Erin have insane chemistry.  It just leaps from the pages but they still have some things to overcome for it to all work out in the end.  Plus, Bryan is a real piece of work but I really loved how the action in the book didn’t happen until the end.  It was intense but palpable.  In some action/suspense scenes, its just over too quick but Ms. Flockton takes her time and sets it all up.  I was holding my breath the entire time.  Plus, poor Rocket, too.  Knowing that there is something going on with Erin’s friend and she is kidnapped, too.  In fact, Nicole when can we read their book?!  Seriously.
This isn’t my first book by Ms. Flockton and won’t be my last.  I love her voice, how deep her characters are and let’s face it…her sexy as hell heroes and the strong women that she pairs them with.