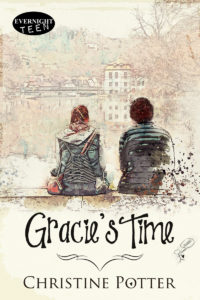 It’s almost Halloween, but something a lot scarier than ghosts is on everyone’s mind: nuclear war. After President Kennedy’s speech to the nation about the Cuban Missile Crisis, Grace Ingraham overhears her parents’ plans to keep her safe. She’ll be sent off to live with a wealthy uncle—in the nineteenth century.

Gracie’s from a family of Travelers, people who can escape into time. Too bad her mom and dad haven’t Traveled since their honeymoon trip to the Lincoln Inauguration. So Grace will have to go alone—even though taking a wrong turn can have serious consequences: like heading for 1890, and ending up …in 2018.

I sat with Zoey on her crazy bed-turned-into-a-swing. Or was it a swing turned into a bed?  She’d designed it herself. It was made out of weathered grey wood and hung from the ceiling on four heavy black chains. She had a homemade quilt and about a million pillows. The bed swung gently as we talked, which was strange, but I have to admit it was also very soothing.

I leaned back against a giant pillow made out of pieces of torn-up blue jeans and my charm bracelet jingled at my wrist. “It’s so weird having Dylan in art with me! I can’t believe they don’t separate out the grades.”

“Why would they?  Art’s a workshop, silly. Only logical.” She crossed her legs under her swirly brown and green flowered dress, pulling it down over her knees.

Unfortunately, Dylan hadn’t talked to me very much. I caught him smiling in my direction a few times, but that was it, despite the Valentine and the walk in the cemetery. Everyone—Zoey, Claire, even Amp—seemed to be crazy about Dylan. Who was indeed very good looking. Even—okay, I’ll use the word again—dreamy. But guys who come that well-recommended … well, it’s confusing, especially if you end up in art class with them and then they go silent on you.

“He hasn’t texted me or anything. I wouldn’t want to seem too…”

“Aggressive? Horse hockey. You text him! Smash the patriarchy!”

I sighed. The patriarchy. As if I didn’t have enough to worry about, there was the patriarchy. Zoey talked about it—lots. There were women announcing the news on TV now. And women doing all sorts of things they didn’t used to…

Welcome Christine Potter! Please start off by telling us a little about yourself Greetings!  I’m the world’s oldest young adult.  I taught high school English for many years, and I have a theory that you become the age that you teach. I might have a few wrinkles but I’m sixteen years old at heart.  Other than that, I’m a poet and a writer who lives in a very old (yup, haunted) house in the lower Hudson River Valley. My husband plays the pipe organ at a big old church just up the road from Sleepy Hollow.  And we have two spoiled cats.

Is Gracie’s Time a single title, or part of a series? It’s actually both.  Gracie’s Timeis a perfectly good standalone read, but it’s also the fourth installment of the time traveling Bean Books.  It takes the older characters up into the year 2018, and introduces a bunch of new, young characters.  It has time travel, a mystery, a love story, and a make-you-cry story about growing away from your parents.  Also, there’s a demon, but just a wee one. It’s a nasty little bugger, though.

What were your inspirations for the story? I was thinking about how uncertain things felt (and still do feel) in the world. I’m old enough to remember the Cuban Missile Crisis. We all believed that there could be a nuclear war back then. My elementary school teachers made me hide under my desk (duck and cover!). It occurred to me that kids are still hiding under their desks and afraid—but now we have something even more terrifying: active shooter drills. Since I write time travel, I wondered about bringing a character from the Cuban Missile Crisis—October, 1962—into the present. And then the tragic shootings at Parkland, Florida happened when I was about fifty pages into my manuscript.  I knew I had to finish Gracie’s Time then.

Please share your setting for (Gracie’s Time). Have you ever lived or visited there? If so, what did you like most? My books all tend to be set on my home stomping grounds: the beautiful, haunted, historic Hudson River Valley. My father’s family has lived here since the first Dutch settlers in Manhattan.  I love how old it is.  We have buildings here that predate the United States itself. My own house is one of them: built in 1740. I especially love the sweet villages that line the Hudson River.  Stormkill, the setting for all the Bean books, is there, in Headless Horseman territory.  The ruined mansion that plays a big part in Gracie’s Time is based on one I snuck into as a child.

When did the writing bug first bite?  I was a little girl, making pretend, taped-together books and writing silly lyrics to songs on the radio when I first started playing with words.  I think I was in high school when the bug bit hard.  I was churning out mildly embarrassing paranormal fiction in the form of short stories then, and very angst-ridden poetry.  Free verse, of course, because I was a raving hippie. The Bean Books contain plenty of raving hippies.

Who are you favorite authors, book/series? I love a LOT of authors.  In YA fiction, I tend to go for the classics: Madeleine L’Engle’s Time Quintet, which includes A Wrinkle in Time, Lucy Maud Montgomery’s Anne of Green Gablesbooks, but especially her Emily series—and of course the Harry Potters!  Potter is my real last name, by the way. I like a lot of grownup authors, too—Sarah Waters, who writes historical fiction, and Armisted Maupin, who wrote Tales of the City.  My poetry role models are Robert Bly and Anne Sexton.  I also read cookbooks like novels.

If you could have an author roundtable discussion with any authors, who would you invite?  It would involve bringing some of them back from the next world, I think. I just missed studying with Madeleine L’Engle, so I’d love to invite her.  And why not Lucy Maud, too?  I did a sort of masterclass residency thing for a week with Karen Joy Fowler when I was writing the first Bean book (she was a Beta reader!)  She’d be on my guest list.  And since I forgot to say how much I admire the poet Mark Doty, I think I’d better mention him here, too. I’ve met him and he is a generous teacher and a kind man.

Do you have any hobbies or special things you like to do in your spare time? I DJ old school rock and roll at an internet radio station and sing choral music with my husband’s choir.  And I cook just about every night.  I like the hobbies you can eat.

What’s the strangest thing you’ve heard or seen? I saw two slugs mating once.  It was at a party and we were all outside.  Everyone watched.  It was…slimy.  I’ll spare you the details.

Guys, this book.  Oh, my word.  I’ve read Evernight Teen books before but this one has to be there best yet.  I haven’t had the pleasure of reading. Ms. Potter beforehand and I now MUST read the other Bean books in the series.  I read that they are all about Bean, Zak, and Amp.  Speaking of Bean, Zak (Bean’s boyfriend) and Amp they are awesome characters.  They are hilarious, perfectly written and help our time traveler, Gracie.

Gracie is a great character.  I loved how Ms. Potter wrote her as a fish out of the water, but Gracie’s no dummy.  She’s smart and figures out most stuff on her own.  She still needs lessons on her cell phone but I loved how she manages to keep her sixties cool while dealing with a somewhat boyfriend, dealing with pseudo parents (Amp and Claire), finding a bestie, Zoey and then having all these “travels” that she can’t control or explain.  Loved her.

I really, really loved this book.  Some parts were a bit creepy.  I mean, the uncle from hell, and then someone pulling a gun on Gracie and her friends in another time.  Great stuff.  While the book is all kinds of fun, there is a bit of a lesson to be learned.  Sometimes finding your voice and home aren’t always where they are supposed to be.  I felt like Gracie in the end, found what she needed and I would love a follow-up to her story.  What really happened to her mom and brother?

The setting of the book is a character unto itself.  Beautiful imagery and I can honestly say that I would like to see the Brown Estate for myself.

If you want to read a light-hearted, at times spooky book about a teen that “travels” to another time while still dealing with things from her past, this book is for you.  It shows how a community comes together to help a teen find herself, deal with the uncertainty of leaving everything and everyone beyond and finally figuring out that you are where you are supposed to be.

BTW, Amp is cray cray (in a good way) and I wish I had Claire’s sewing skills.  Just saying… 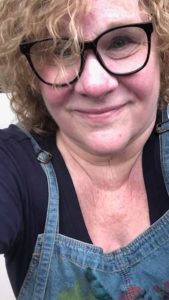 Christine Potter lives in a very old, haunted house, not far from Sleepy Hollow.  She’s the author of the time-traveling Bean Books series, on Evernight Teen: Time Runs Away With Her, In Her Own Time, What Time Is It There? and Gracie’s Time.  She’s also a poet, with several books in print (the most recent is called Unforgetting). Christine loves all kinds of music, DJ’s, and plays dulcimer and guitar. 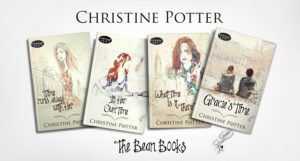 Christine Potter will be awarding a $30 Amazon/BN GC to a randomly drawn winner via rafflecopter during the tour.