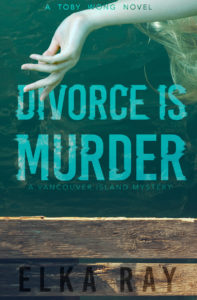 As teens, they bullied her. Twenty years on, she’s not scared of them. Except she should be…

After returning to her quiet hometown to care for her ailing mom, divorce lawyer Toby Wong is hired by Josh Barton, a guy who broke her heart as a teen at summer camp. Now a wealthy entrepreneur, Josh wants to divorce Tonya, the mean girl who tormented Toby all those years ago. When Tonya is found murdered, Josh is the prime suspect.

Together with her fortune-teller mom and her pregnant best friend, Toby sets out to clear Josh, whom she still has a guilty crush on. As she delves deeper into Tonya’s murder, Toby keeps running into catty ex-campers she’d rather forget. Are her old insecurities making her paranoid? Only too late does she realize she’s in danger.

Colin peers into the empty parcel, then sticks two fingers inside. He pulls out an envelope-sized slip of paper and lays it onto the table. Although the words are facing the wrong way, I have no trouble reading it. Fashioned from letters cut out of newspaper, the note reads: LEAVE VICTORIA, BITCH.

Tonya had received a similar note with her red-paint-flecked Barbie doll.

A muscle in Colin’s jaw jumps. He looks angry. “Who could have sent this?” he asks. “Do you have any bitter ex-boyfriends? Guys you might have rejected? Anyone who came on too strong?”

I shake my head. I’d rather not tell Colin that it’s been nineteen months since my last date, with a guy I met in a Toronto doctor’s office who spent our entire date describing—in vivid detail—his recent hernia surgery.

“How about social media?” asks Colin. “Are you active on dating sites? Have you gotten any similar sorts of messages. Anyone seem obsessive? This kind of stuff can start online and then escalate.”

Again, I say no. My few attempts at internet dating were so lame I swore never again. The real world is weird enough. “There’s nothing like that.” I survey the bra, wishing the label weren’t sticking out, those double AAs on full display. “But it’s my bra,” I admit. I explain how, just last night, it vanished from my building’s communal laundry room.

Colin’s frown deepens. “Last night? That means whoever sent this was in your building.” He tugs at his collar, clearly agitated. “This isn’t good, Toby.”

Yall this book.  I was so excited to read it.  I’m getting really into the cozy mystery/romantic elements genre right now.  Ms. Ray does not disappoint.  I fell in love with Toby and all her friends.  Quinn is a mess but Toby needs her to be the sounding board she needs and her mother Ivy, is a trip.  I loved how Ms. Ray has developed more of a friendship now with Toby and her mother.  Mother/daughter relationships are tricky at best, but Ms. Ray handles theirs perfectly.

The whole mystery is a hoot.  I never figured it out.  At one point I thought the murder was really a no-go; a prank.  Toby was severely bullied by these people and in some ways still is but she holds her head up high and tries not to let it get to her.  The bullying aspect could be a trigger for some but once again, Ms. Ray handles it well and really makes you think about all the stuff you did to other people growing up and honestly, I felt a little shame.  I was never outright cruel but I wasn’t kind to certain people either.  The bullies in the story are your typical mean girls but a couple of them are just downright nasty.  And not just to Toby.  One, in particular, you could almost say bullied Tonya at some point.  Shocking, I know.

The romance is very subtle in the book and let’s just say that it is a loose end.  Colin and Josh have strong attributes to them but I will have to say, I’m Team Colin right now.  Even after solving the mystery, Josh would have to do some major growing up for me to be on board with him.  Colin just gave me all the feels when he was with Toby.  And of course, Toby has blinders on because of Josh but I think Colin could win her over.

This is a fast-paced book.  I read it in a couple of hours and I miss Toby, Ivy, and Quinn already.  The bullying is brought up in flashbacks in Toby’s mind and it can be painful to read.  I hate bullies and to think I might have been one, a time or two.  It makes me sick to think that but it will make you think.  I can’t wait for the next book. 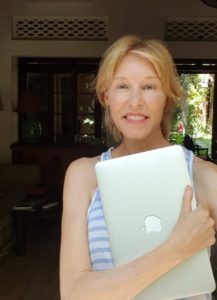 Elka Ray writes fast-paced romantic mysteries and scary thrillers – a dichotomy that reveals her belief in Yin and Yang, or the balance of opposites. A great lover of scientific facts, she may be found clutching crystals for good luck; reads highbrow journals and tabloid trash; and refuses to watch romcoms yet moved in with her now-husband on their first date.

Elka is the author of three novels – the romantic mysteries DIVORCE IS MURDER and HANOI JANE – and the noir thriller SAIGON DARK. She also has a collection of short crime and ghost stories set in Southeast Asia – WHAT YOU DON’T KNOW. Elka lives with her family near Hoi An, Vietnam. She is represented by Folio Literary Management. – link to http://foliolit.com/agency#f.About

Elka Ray will be awarding a $15 Amazon or B/N GC to a randomly drawn winner via rafflecopter during the tour.