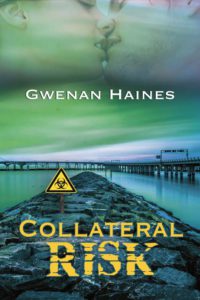 After losing her sister to a serial killer years earlier, scientist Mia Lindgren survives by focusing on the most dangerous viruses known to man. She’s become adept at shutting herself off from human contact—until her lab partner drowns under suspicious circumstances.

Forced to accept the assistance of Nick Doyle, an FBI counter-terrorism expert on leave, she soon realizes someone at the Institute for Research of Infectious Diseases is involved in a deadly deception. As she and Nick race to find a killer who will stop at nothing to accomplish his version of Armageddon, they can’t ignore their own chemistry. But can Mia truly put the past to rest?

Mia finished reading the articles and took a chair opposite him. If it hadn’t been for the fact they were talking about the end of the world, it would have been cozy, sitting there with her. Small problem.

“If he wasn’t dead, I’d say it would be natural for him to have them. Working with this stuff is what we do. If he came across those articles, he’d keep them.” She hesitated, averting her gaze. “I would too.”

“Well, you’re right about one thing, Bride of Frankenstein,” he said. “The man’s dead. And I’m guessing this has something to do with it.”

“So you believe my theory—about him not really drowning.”

“I’m starting to. I called to get the results of the autopsy and hopefully should have them in a day or two if nobody decides to stall.”

“You think they’re going to stall?”

“I don’t know. We’ll see. I’m supposed to be on leave, so it’s possible the powers that be don’t want me getting involved in something I shouldn’t be.”

They got that right. Under the yellow overhead light, Mia’s hair fell down over her shoulders in pale waves. He’d never seen it down. He almost wished he hadn’t.

She gave him a hard look. “Maybe you shouldn’t. I mean, you’re supposed to be getting better, aren’t you? Healing. This can’t be helping.”

“It is helping,” he said quietly. “You’re helping.”

She looked away. For several seconds, she didn’t speak. “I don’t think so,” she said at last. “I’ve never helped anybody. Not even my own mother.”

“Okay.” He wanted to reach out and take her hand in his. No, he wanted to take her upstairs and show her how much she’d helped him heal, one long kiss at a time. But if he told her that he’d lose her. Whatever had happened to her in the past had scared the hell out of her. If he pushed too hard, he’d lose her.

And he wasn’t going to get involved with her in the first place. Wasn’t that what he kept telling himself?

4 in a row.  That is a record for me.  Plus, this is a new to me author.  And it deals with bioterrorism, something that I know nothing about.  I read the authors notes and definitely have a new found respect for the CDC.  Oh and Ms. Haines, I had heard about that island.  That’s some spooky stuff right there.

If I had one thing to nitpick about the book is I would have liked a bit more of the romance.  I know, I know.  Believe me, I felt the connection between Mia and Nick but I felt like it was more of an HFN.  Both of them had some serious relationship issues to be worked out.  Nick’s dead wife and Mia’s whole family issues but I still would have liked a cleaner ending.  But hey that’s just the romantic in me.

The thriller part of the book is phenomenal.  Yes, phenomenal.  There were times that I had to read some parts twice just so I could get a better sense of everything that was going on.  While the plot is simple in context, Ms. Haines has written it where there are some red herrings that I never saw coming.  You definitely have to pay attention and I love when an author makes me think while I read a suspense/thriller book.  Plus, I learned a lot about bioterrorism.  People, that’s some scary shit.  Sorry for the language but it is.  And the depths that some people will go to to make it happen.

Ms. Haines writing is very fluid and taunt.  She knows how to write a very balanced suspense/thriller.  The book starts off fast and really doesn’t let up.  Okay, there is that one time.  *wink wink*  I also liked how her secondary characters are fleshed out and not just window dressing or plot devices that make no sense.  Mia mom, Angela, is one of those characters that at first glance would be throwaway but she has depth and I especially liked how she and Mia tried to bond in the end.

Do your self a favor and pick this book up.  It’s taunt, thrilling, suspenseful and characters that you truly will care for.  Plus, I have a soft spot for the “wounded” FBI agent.  Oh yes, I didn’t mention that about Nick?  My bad.  He He!!  And if you are worried about Mia being soft?  Don’t be.  She’s tough.  Just scared when it comes to having a real relationship with anyone.  *sigh* 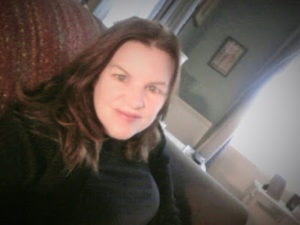 Gwenan Haines lives in New England with her daughter and a Siberian husky born on Halloween. She’s been hooked on suspense ever since her mom read her an old Nancy Drew mystery when she was five years old. She also loves romance and fantasy. Her paranormal novella, WRAITH, and novel, SHIFT, the first two installments in the SHADOW WORLD series, are under contract with Wild Rose Press’s fantasy line. When she’s not plotting her newest mystery, she teaches community college and writes lots of poetry.

Gwenan Haines will be awarding a $20 Amazon/BN GC to a randomly drawn winner via rafflecopter during the tour.