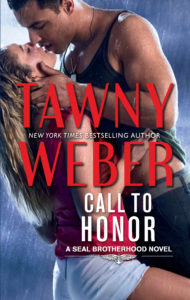 “No man left behind” is inscribed in the DNA of every SEAL and Lieutenant Diego Torres is no exception. But with a team member killed—and the body missing— Diego’s honor is sorely tested. Now his career and reputation are on the line, and a traitor is hiding among them. Diego wants answers…and only one woman has them.

Single mom Harper Maclean has two priorities—raising her son Nathan and starting a new life. Her mysterious new neighbor may be impossibly charming, but Diego asks too many questions about her past—and about the father of her child. Questions she fears will reveal her burning attraction for Diego, and ultimately put them all in danger’s path.
~~~~~~~~~~~~~

Harper stepped through the iron fence and froze.

The new neighbor was in his backyard. Barefoot and shirtless, he wore what looked like black pajama bottoms. He simply flowed across the moon-drenched lawn. Kicks, turns, chops and punches flowed in a seamlessly elegant dance.

Was that martial arts he was doing?

She couldn’t quite get past that one particular point.

It was too delicious.

But instead of licking her lips, Harper clenched her fists tight at her side.

Why the hell was a man who looked like that living next door to her? More to the point, why did her libido choose now to wake up? Was it some cosmic joke that she’d remember now, despite her claims to the contrary, she was a sexually aware woman who had needs and desires?

Harper watched him do some sort of flip, feet in the air and his body resting on one hand. Muscles rippled, but he wasn’t even breathing hard as he executed an elegant somersault to land, feetfirst on the grass, knees low and arms extended.

She’d bet all of her needs and desires could be handled quite nicely by her gorgeous, and quite physically impressive, new neighbor.

Harper would have growled if she weren’t worried the guy would notice the slightest sound and turn around. The last thing she wanted while she was going through this personal crisis was attention.

She wanted to blame Andi. Oh, not for the new neighbor. Arranging for good-looking neighbors wasn’t one of Andi’s oft-bragged about skills. But putting the idea of sex and lust and, yes, dammit, craving, into Harper’s mind so her imagination ran wild when she looked at the new neighbor? That was totally and completely Andi’s fault.

Her stomach tightened with an edgy need she recognized as desire as the guy did a series of kicks, each one higher than the other with the last aimed straight overhead.

A cross riding low on his hip and something tribal circling one bicep.

Who knew tattoos were so sexy?

Sweet Jesus.  I have to admit that I haven’t read Ms. Weber in a while.  Somehow she got out my rotation when it comes to Harlequin books.  And yes, I forgot how delicious her heroes are and that no one write SEALs better than her.  Yes, I put her SEALs up against anyone else.  She’s that good.  So on to the review.

Torres and Harper are match made in heaven.  On paper, they don’t seem to fit but once you get through their layers, they are closer to a couple that is destined to be together.  Similar backgrounds and the bravery, fortitude, dedication, and love that they have for their friends.  Plus, there is nothing better than watching a big, bad SEAL brought to his knees by the thought being able to settle down with a woman, her son that the adores and the feelings that come with it.  Torres, just didn’t know what hit him.

Harper is the type of heroine that doesn’t whine, pout but is loyal, funny and fiercely protective of Nathan, her son.  Not to mention that her friend Andi, is a hoot.  Plus, I loved that Harper, after a huge dryspell, was the one that put the moves on Torres.  Oh yes, sex kitten is what she turned out to be.  He He!  I also like Ms. Weber didn’t drag out the black moment between them either.  They had a common goal that they working towards but in no way to she gloss over it.  I loved how it ended but now, I need Prescott’s book.  Plus, I didn’t mention that Andi and MacGuyer…well, I’m sure their book will come later.  🙂

Overall, I missed Ms. Weber and her SEALs.  I will be reading the rest of this series.  Trust me, I will NOT make this mistake again.  She made my heart happy and reading this book for me was like welcoming a long lost friend back into the fold.

New York Times and USA TODAY Bestselling author of more than forty books, Tawny Weber loves writing about sexy heroes, most notably her popular Navy SEALs series.  Her sassy, emotional romances are filled with men dedicated to being the best—and women determined to have the best.  Tawny credits her ex-military alpha husband for inspiration in her writing, and in her life.   The recipient of numerous writing accolades, including Romantic Times Reviewers Choice and in addition to the NY Times and USA Today bestseller lists, Tawny has also hit the number one spot on Amazon and Barnes & Noble.

Tawny will be awarding a $25 Amazon or B/N GC to a randomly drawn winner via rafflecopter during the tour.
a Rafflecopter giveaway ”