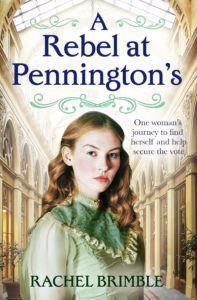 A Rebel at Pennington’s

1911 Bath. Banished from her ancestral home, passionate suffrage campaigner, Esther Stanbury works as a window dresser in Pennington’s Department Store. She has hopes and dreams for women’s progression and will do anything to help secure the vote.
Owner of the prestigious Phoenix Hotel, Lawrence Culford has what most would view as a successful life. But Lawrence is harbouring shame, resentment and an anger that threatens his future happiness.

When Esther and Lawrence meet their mutual understanding of life’s challenges unites them and they are drawn to the possibility of a life of love that neither thought existed.
With the Coronation of King-Emperor George V looming, the atmosphere in Bath is building to fever pitch, as is the suffragists’ determination to secure the vote.

Will Esther’s rebellious nature lead her to ruin or can they overcome their pasts and look to build a future together?

Women’s Suffrage & A Rebel At Pennington’s

When I was around the age of thirteen or fourteen, my school did a project on women’s suffrage and their fight to win the vote. I can still remember how quickly the topic took hold of me and the passion I felt from the injustice towards other women.

I handed in my project and was awarded an A.

Something inside of me shifted. A belief and need to know more about the women who sacrificed so much of themselves, their occupations and home lives in order to right what was a clear wrong. Little did I know that my interest in women’s suffrage would never wane as I grew older.

For as long as I can remember, I’ve wanted to write a novel where women’s fight for the vote played a big part in the book. A Rebel At Pennington’s is my twenty-first published novel and it was only when I was writing the previous book in the series (The Mistress of Pennington’s) that a secondary character came onstage as a suffragist.

I’d finally found the heroine who would star in my first venture into writing a story involving the Cause.

I cannot tell you how excited I was to start my research! I bought books, visited websites, spoke to the archivist at our local history centre and attended two talks from historians marking the centenary of the vote being obtained.

It was the choice of being a suffragist (peaceful) and suffragette (militant) that ultimately prevailed in the issue with which I wanted my heroine, Esther Stanbury, to struggle. I can imagine the growing frustrations of the women campaigners and how their constant rebuttals and failures to be heard provoked an increasing and ardent need to ‘do whatever was necessary.’ Yet, the more I read, the more the question of whether or not their actions were, in fact, acts of terrorism began to emerge in my mind.

Throughout my research, my emotions ranged from pride, to shock, to indignation to jubilation and it was these emotions that I used to power the book and, ultimately, Esther. She is a combination of a few real-life suffragists and suffragettes who came up in my research and fascinated and/or resonated with me.

I am not, and will never claim to be, a historian in any shape of form, but I am a novelist and that means my job is to entertain. To write a story that will interest and inspire my readers. Leave them with a something to think about, something to feel or about which to form their own opinion. I absolutely loved researching this significant time in women’s history and loved writing A Rebel At Pennington’s.

Fingers crossed, my passion for women’s suffrage and the women who paved the way for the rest of us comes across in my latest novel.

She looked towards Lawrence.

He softly studied her, and her cheeks warmed. The way he looked at her inferred he was equally moved by Mrs Hadley’s sadness. Esther looked away. He, too, was widowed. Had he and his wife once shared the same love that Grace Hadley spoke of?

Shamed by the jolt of jealousy that shot through her, Esther walked to stand behind a pillar that blocked Lawrence’s sight of her but gave her full view of Mrs Hadley. A familiar sense of unworthiness knotted Esther’s stomach. If Lawrence understood Grace Hadley’s words and sorrow, then, he too, must have known deep and meaningful love.

She would never be enough to compete with such a ghost. Would never be enough to be with a man who bore such longing for a person he’d lost. If she listened to her body and how it so treacherously reacted to Lawrence, her attraction to him would only end badly when the moment came that she’d inevitably held something of herself back.

She could not forgo everything she had built. Somehow, she had to find the strength to fight the temptation of Lawrence’s gaze and quash the yearning to see him again…to see his children again. The emotions he’d evoked in her proved her capable of feeling. Something she had doubted for so very long. Her meeting him had been worth that, at least.

My lovely English Rose has done it again.  But I say that every time I read a book of hers.  She’s one of those authors that I just adore and actually learn a few things from.  I admit that I’m not educated on the right to vote by women.  It was glossed over in my history class but it was interesting learning about it from Ms. Brimble’s perspective.  She’s a Brit and I’m an American.  As women today, we don’t think about how women weren’t allowed to do anything outside the home without the consent of a man.  Grrrr… Or the government.  But I digress.  Like Ms. Brimble said above, she’s not a history teacher but that’s why I love this series.  She made me think.  Made me look up stuff on the computer and go to the library.

Esther is a bad*s* in a different time and place.  But she also a woman that has desires, too.  She didn’t want to even think about falling for Lawrence and his children but she did.  They are more alike than they realize and it was a joy to see them build a relationship with each other.  Lawrence is a great character and person, regardless of what he thinks of himself.  You have to remember that the time frame of this book is still in the early years of the 20th century.  King George is about to be crowned, the first World War is on the horizon and things were done a certain way.  Again, this is what I love about Ms. Brimble’s books.  No matter what setting she is using, Victorian, contemporary, or Edwardian, she transports you and you become part of the story.  At least for me.  Its like watching the movie Wonder Woman.  The scenes in England were just… I can’t explain it, really.

I can’t wait to see where Ms. Brimble takes us next in this series.  We get to see Elizabeth and Joseph again.  While secondary characters in this one, they are still well rounded and its fun to get to know them a bit more now that they are married and her dad has retired.

Do yourself a favor and pick up this book from Ms. Brimble.  Hell, any one of her books.  She immerses you into a time and a place that is romantic thought-provoking and just may see things a bit differently than before.  I like when an author does that. 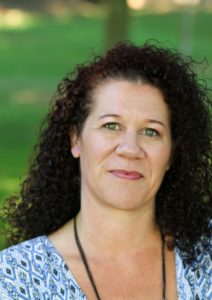 Rachel lives with her husband and their two daughters in a small town near Bath in the UK. Since 2007, she has had several novels published by small US presses, eight books published by Harlequin Superromance (Templeton Cove Stories) and four Victorian romances with eKensington/Lyrical.

In January 2018, she signed a four-book deal with Aria Fiction for a new Edwardian series set in Bath’s finest department store. The first book, The Mistress of Pennington’s released July 2018 with book two coming February 2019.

Rachel is a member of the Romantic Novelists Association and Romance Writers of America and has thousands of social media followers from all over the world. To sign up for her quarterly and new release newsletter, click here to go to her website: https://rachelbrimble.com/