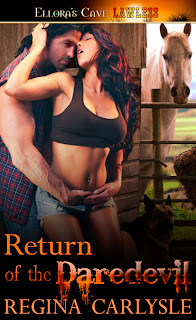 My good friend Regina Carlysle has a new book coming out today from Ellora’s Cave, the second book in the series of three brothers from Delight, Texas.  I highly recommend this series.

Scrumptious scoundrel. Daredevil T Dobbs, the sexiest cowboy to ever walk the streets of Delight, Texas, headed out of town taking Melanie Honeycutt’s heart with him. But now he’s back and hotter than ever. Trust him? Her head says no but her body has other ideas.

Stubborn woman. She was the girl T never forgot and the woman he yearns for in the deepest part of his heart. But what’s a man to do when she doesn’t believe he’s home for good? T knows his way around dangerous curves and Mel’s are hot enough to burn a man. He figures it’ll take a slow hand and some downright smokin’ hot sex to melt her reserve but he’s definitely up for the challenge.

Excerpt:
An Excerpt From: RETURN OF THE DAREDEVIL
Copyright © REGINA CARLYSLE, 2011
All Rights Reserved, Ellora’s Cave Publishing, Inc.
She looked up and froze to see T silhouetted in the doorway of the gym.
Like a gunslinger from an old movie, the sun was at his back casting him in shadows and the entire room went still. Heavy air seemed to hover like a living thing in the gym and even the teenaged girls didn’t make a peep as he filled up the room with his presence. But even cast in shadow, it was impossible to mistake that long, lean frame or the swagger in his stride as he finally began to cross the room. T’s bootheels rapped sharply on the carefully tended hardwood. He moved like a man who did what he pleased and took what he wanted. Determination marked his every step and as he drew closer, the shadows lifted showing Mel the glint in his storm-colored eyes. They were hungry eyes. Sexy eyes. Heavily lashed, they narrowed dangerously beneath the brim of a straw summery cowboy hat that had definitely seen better days. T’s hair beneath the battered hat was long, thick and black, brushing the tops of sturdy shoulders that she practically itched to stroke with her fingers. The hint of a five o’ clock shadow covered the lower part of his sexy, masculine face. Oh boy. T for trouble. Suddenly he grinned, throwing her even further off guard as he tipped back the brim of his hat and moved in close enough to touch.
“Hey, darlin’,” he drawled. Before she could blink, T Dobbs wrapped a muscular arm around her, hauling her close, and breathed against her lips. “Damn woman. I missed you. Kiss me hello, sweet thang.”
The world instantly melted away.
Just like that he stole every bit of good sense she’d ever possessed as his lips took hers in a savage kiss that quite simply rocked her world. There was nothing tentative in T’s mouth slowly devouring hers. His tongue cruised over her lips, tasting thoroughly before dipping deep until she could taste all the complex flavors of this man she’d always loved. If anything his kisses were even better than they’d been all those many years ago. A flash of jealousy whipped through her as she wondered about how he’d gained all this expertise but then the anger was dashed away under the seductive lash of his tongue.
She was lost. Taken under. Obliterated with just one touch.
One big hand cupped the curve of her jaw as a twitter of sound swept the room. Giggling and applause and chatter came at her as if from a distance but, truth be told, she could barely hear it over the roar of blood in her ears. Her nipples went hard against the practical cotton of her bra and she gasped at the sensation.
“Hey! Get your hands off her. What do you think you’re doing?”

See, see…go buy this book, you will not be disappointed at all.  You can find Regina at the following:

5 thoughts on “Return of the Daredevil by Regina Carlysle”